Ministry of Defence said:
Located at Imjin Barracks in Gloucestershire, home of NATO’s Headquarters Allied Rapid Reaction Corps (HQ ARRC), the aircraft, an early 1950s’ Meteor, was lifted by a Chinook helicopter and moved to its new home at the Jet Age Museum, located at Gloucestershire Airport in Staverton.
The Meteor was once the ‘gate guardian’ for the Imjin Barracks site in its former life as RAF Innsworth. Following the RAF station’s closure in 2008, transfer to the British Army and reopening as Imjin Barracks in 2010, the Meteor was moved to a new location next to HQ ARRC’s Installation Briefing Centre.
Imjin’s Meteor was recently purchased by the Jet Age Museum and is slated for restoration and inclusion in its exhibits, which will focus on the region’s extensive aircraft production history and affiliation with the aviation industry.
The Gloster Meteor was both the UK’s first jet aircraft and the Allies’ first operational jet fighter. The Meteor’s development was heavily reliant on its ground-breaking turbojet engines, developed by Sir Frank Whittle and his company, Power Jets Ltd.
Development of the aircraft began in 1940. The Meteor first flew in 1943 and commenced operations in July 1944 with 616 Squadron of the RAF. Although the Meteor was not an aerodynamically advanced aircraft, it proved to be a successful and effective combat fighter. 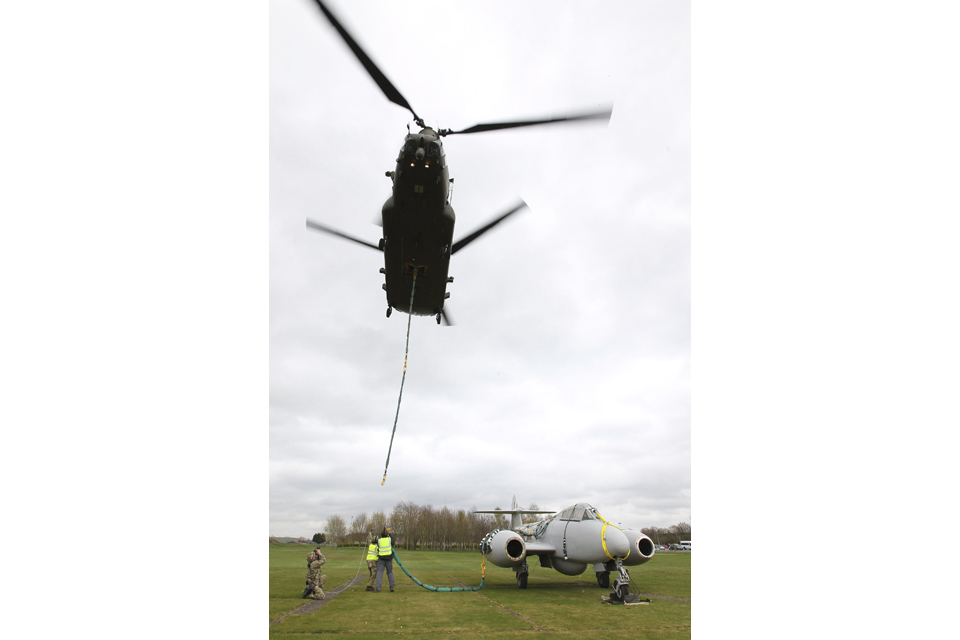 The Chinook helicopter begins to lift the Meteor gate guardian [Picture: Senior Aircraftman Dave Turnbull, Crown copyright]Several major variants of the Meteor were made to incorporate technological advances during the 1940s and 1950s. Thousands of Meteors were built to serve in the RAF and other air forces and remained in use for several decades.
The Meteor saw limited action in the Second World War, while Meteors of the Royal Australian Air Force made a significant contribution to the Korean War, and several other operators such as Argentina, Egypt and Israel also flew Meteors in regional conflicts. As of 2011, 2 Meteors have remained in active service with the Martin-Baker company as ejection seat testbeds.
Imjin’s Meteor T7, built in 1949 at Hucclecote, has had something of a chequered operational history and was involved in a number of minor flying accidents, some of which required return to the manufacturer for repairs.
It served primarily with No 604 Squadron at North Weald and was once flown by former Conservative MP, now Lord, Norman Tebbit when he joined the squadron in January 1952.
In 1957, it was delivered to the Aeroplane and Armament Experimental Establishment at Boscombe Down, where it performed a variety of flying and ground test roles before ending its flying life some 2,000 flight hours later in 1968. 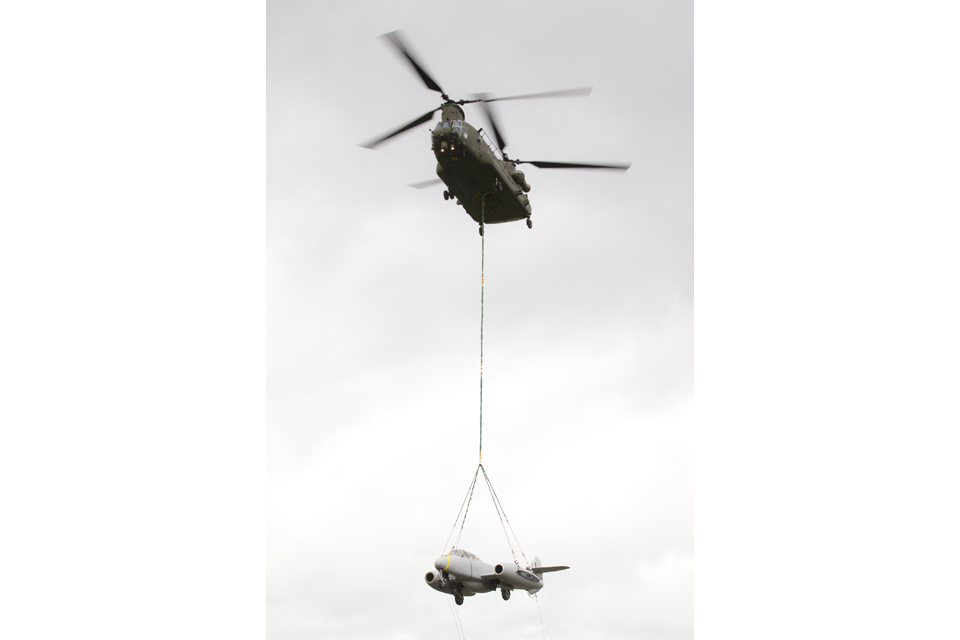 The Meteor gate guardian on its way to the Jet Age Museum at Gloucestershire Airport [Picture: Senior Aircraftwoman Kathryn Jacques, Crown copyright]Officially ‘struck off charge’ in 1977, the aircraft was transported to RAF Innsworth in 1981, where it underwent long-term restoration. It was unveiled as the HQ Personnel and Training Command ‘gate guardian’ in 1994.
The relocation of the Meteor T7 to Gloucestershire Airport means there are now no reminders at Imjin Barracks of the site’s RAF past. HQ ARRC spokesman Major Chris Hyde said:

I can’t think of anything more fitting than for Imjin’s Meteor aircraft to ‘fly’ to its final destination. We’re honoured that we have had the opportunity to host this splendid aircraft, one that has been part of Britain’s and the Allies’ treasured history.
​
Major Hyde explained:

The Meteor aircraft represents a very important link to Gloucestershire’s military and industrial heritage. It embodies a period of rapid technological progress in the region that is still represented in the area today. In military terms, the Meteor defines an era where former adversaries forged military alliances that aided the development and establishment of NATO, the ARRC’s parent organisation.
​
HQ ARRC is a NATO Rapid Deployment Corps headquarters, founded in 1992 in Germany, and headquartered in Gloucestershire since August 2010.
Although HQ ARRC’s ‘framework nation’ is the United Kingdom, comprising approximately 60% of the overall staff, the ARRC is fully multinational in nature and organisation, with 15 partner nations contributing the remaining complement of personnel (Belgium, Canada, the Czech Republic, France, Denmark, Germany, Greece, Italy, the Netherlands, Norway, Poland, Portugal, Spain, Turkey and the United States).

RAF Fighter Jets, Surveillance and Refuelling aircraft have been in action across Europe this week in support of NATO allies