News story: Over 100 opportunities for ex-service personnel as TfL signs the Armed Forces...

London’s Transport Commissioner, Mike Brown MVO, has signed the Armed Forces Covenant to confirm TfL’s ongoing commitment to supporting the Armed Forces. The Covenant was signed at TfL’s annual Industry Day, which was attended by over 100 former members of the Armed Force currently looking for employment.

The signing of the Covenant is in recognition of the value that serving personnel, reservists, veterans and military families bring to TfL as an organisation, and in turn, to London as a whole.

Since 2012, TfL and its suppliers have created 28 paid work placements to help ex-Armed Forces members who may be wounded, injured or sick, back into employment. Of the 28 who have taken part, 27 have gone on to full time employment within the transport industry. TfL’s suppliers who have been creating roles for ex-service members, include Siemens PLC, Imtech ICT Ltd, Telent Limited, Cubic Transportation systems, Ringway Jacobs and CSC.


I’d like to thank Transport for London for declaring their support for our Armed Forces and recognising the contribution they make to this country. TfL is already a strong supporter of our Armed Forces community, offering free travel to serving personnel in uniform and free travel for veterans through the Veterans Oyster photo card. This support makes a real difference.

And now, having signed the Armed Forces Covenant, they are making a commitment to continue and grow this support – for example, offering TfL insight days for ex-service personnel, offering assisted entry routes into TfL and increasing support for their Reservists.
​ 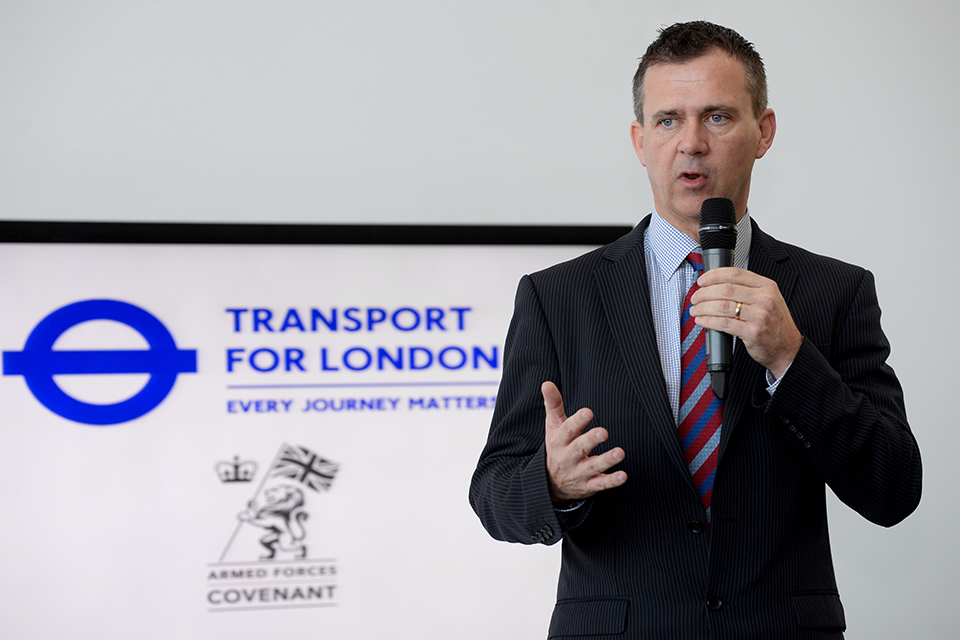 
Our Armed Forces perform a sterling job serving our nation, and I’ve long believed that they deserve our support in every possible way. It’s why I introduced free travel across the capital for war veterans and serving personnel, and it’s why we have worked so hard to maximise ex-service member’s opportunities at TfL where their skills match up so well.
​
London’s Transport Commissioner, Mike Brown MVO, said:


Our ex-service placement scheme has been extremely successful, and we’re delighted that, together with our suppliers, we’re going to help even more former Armed Forces members back into employment. We have an engineering skills shortage in the transport industry and the scheme is helping us benefit from the skills these brave men and women gain during their careers in the Armed Forces.

The signing of the Armed Forces Covenant reflects the contribution that ex-service members have been making to the transport network for decades. We have a long standing relationship with the Armed Forces, dating back to the First World War when bus drivers drove troops to and from the front line.
​
Many of the people who join TfL come directly from a career in the Armed Forces and still have an active involvement with the Reserve Forces.


As a young boy, I always wanted to join the Army and it was a dream come true when I did in 2008. In 2012, whilst on patrol in Helmand Province, Afghanistan, I was hit by an IED which resulted in me losing both my legs. I was medically discharged from the Army in 2014 and have struggled to find work because employers just look at me and think I won’t be up to the job.

I was speaking to the Career Transition Partnership who told me about TfL’s scheme which sounded like a great opportunity. I was offered a place on the scheme and joined in January 2016. I’m now working in their Traffic Control team and I absolutely love it. I never saw myself working in an office but we’ve got a really good team who make every day enjoyable.
​
Niall Ahern, Employment Engagement Director at the Reserve Forces’ and Cadets’ Association for Greater London, said:

It’s also a recognition of the value TfL gets from the skills and experience gained by employing both Reservists and people leaving the Armed Forces. Public transport in London has a proud history of support for the forces, dating back to the London bus drivers who ferried troops to the front line in 1914, today is another demonstration of that continuing commitment.
​
Since November 2008, veterans have been able to travel on the Tube, DLR, Overground, TfL Rail, London buses and trams for free with a Veterans Oyster photocard as part of the Mayor’s Veterans concessionary travel scheme.

More than 7,800 Veterans Oyster photocards have been issued. In addition, in 2012, the Mayor added to this commitment by introducing free travel for all armed forces personnel travelling in uniform of London Underground, bus, Tram, DLR, TfL Rail and London Overground.