The MOD and Lockheed Martin UK, as the prime contractor for Crowsnest, have selected Thales as the chosen bidder to provide the radar and mission system at the heart of the Crowsnest capability.

The Crowsnest project will act as the Royal Navy’s eyes and ears for its next generation carriers, giving long range air, maritime and land detection, as well as the capability to track potential threats. Crowsnest will also be able to support wider fleet and land operations, replacing the Sea King helicopter’s Airborne Surveillance and Control capability that has been deployed on regular operations since 1982.

Lockheed Martin UK will now conclude the project’s £27 million assessment phase, expected in 2016, supported by Thales and AgustaWestland, the manufacturer of the Merlin helicopter onto which the system will be able to be fitted.

Once a decision has been taken to proceed into the manufacture phase, it is expected that around 300 jobs will be sustained across these companies in Crawley, Havant and Yeovil.


It is essential that our ships and particularly our future aircraft carriers will have the best possible protection. The Crowsnest system onboard our new Merlin Mk2 helicopter will deliver an essential surveillance and intelligence capability, providing early warnings to our personnel of any potential threats.

The progress on Crowsnest complements the wider Queen Elizabeth Class carrier programme and shows that we are moving ever closer to providing this 21st century Carrier Strike capability for the Royal Navy.
​ 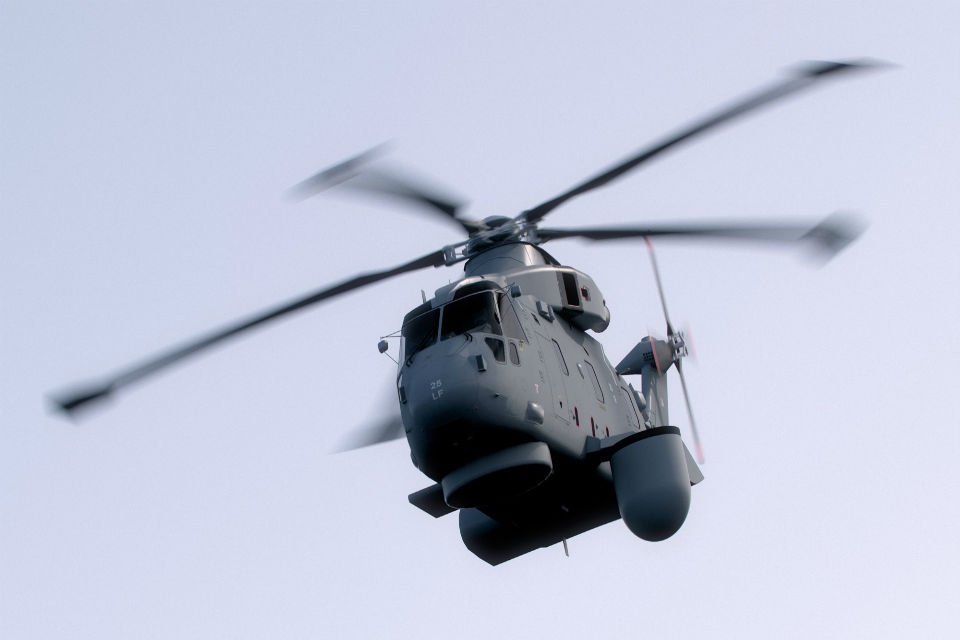 Computer-generated image of a Merlin Mk2 with the Crowsnest surveillance system fitted to the side of the helicopter. The system will provide long range, early detection of potential air and surface threats. (Picture: Copyright Thales)

Crowsnest is part of the UK’s future aircraft carrier capability, which will deliver two Queen Elizabeth Class Aircraft Carriers and fifth generation Lightning II fast jets to operate from them across the world.


Crowsnest will form an integral part of future carrier operations and act as the Royal Navy’s eyes and ears, providing protection through early warning and surveillance.

We have accelerated our programme delivery strategy in order to sustain the capability seamlessly through our Merlin Mk2 helicopters as the Sea King Mk7 fleet retires from service in 2018, and we are confident that the programme will be delivered as planned.
​
The Thales solution is an updated, improved and repackaged role-fit version of the Cerberus tactical sensor suite currently in service on the Sea King Mk7 helicopter.

The design comprises of a single mechanically scanned radar head which uses an innovative system to provide 360o visibility from the underside of the helicopter, and which folds up to the side of the aircraft when not in operation.

You can read more about the importance of Crowsnest to our Carrier programme from Minister of State for Defence Procurement Philip Dunne here. Images of Crowsnest and Merlin MK2 helicopters are also available to download.