Following the Prime Minister’s recent direction to invest and build up the UK’s intelligence, surveillance, target acquisition, and reconnaissance (ISTAR) capability, the Defence Secretary has confirmed that the second Airseeker (Rivet Joint) signals intelligence plane is expected to be delivered to the RAF in September, seven months early.

The first Airseeker is currently employed on operations, alongside a variety of other RAF units, in the fight against ISIL in the skies over Iraq and Syria.

The Airseeker aircraft has state of the art airborne electronic surveillance capability, allowing it to collect, analyse, and disseminate detailed signals intelligence information. In doing so it offers vital support to combat identification and targeting operations.

The new aircraft is expected to be deployable in a matter of weeks after delivery. 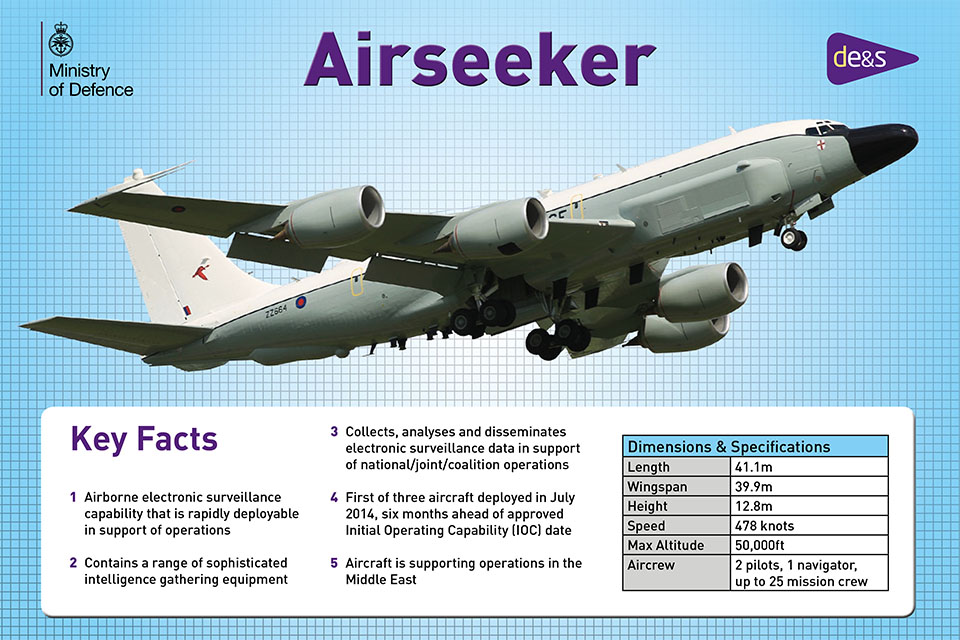 
We’re the only coalition nation conducting manned ISR over Syria. And Today I can announce that our latest Airseeker plane will be delivered next month, seven months ahead of schedule and will be operational shortly after that in the skies above Iraq and Syria – providing essential intelligence in the fight against ISIL. No one, except the US, matches our efforts.
​
As the Prime Minister made clear earlier in the week when visiting RAF Waddington, the home of the UK’s ISTAR force, the UK is already a leading country in the counter-ISIL coalition of over 60 countries.

With investment in high-end surveillance, such as Sentinel, Airseeker, and Reaper aircraft, and RAPTOR pods for the Tornado GR4, the UK is a world leader and offers a vast array of capabilities.

In order to ensure the UK remains at the forefront of the fight against extremism it is important to continue investing in this area, and the announcement by the Defence Secretary today confirms the continued commitment to bring in the latest equipment to keep Britain safe.

Alongside our commitment to meet the NATO target to spend two per cent of GDP on defence, we are also one of just seven member nations to meet NATO’s guideline to spend 20 per cent of its defence budget on major equipment and equipment support.

Nearly £8 billion was spent on new equipment and infrastructure in 2014/15. This investment not only delivers peerless equipment and technology to our forces, better protecting our nation, but also strengthens the defence industry which is then better placed to export to allied nations.

Speaking at the RUSI Air Power conference, the Defence Secretary went on to say:


Defence remains the nation’s number one priority. By increasing the Defence budget from next year by 0.5 per cent in real terms until 2020/21, meeting NATO’s pledge to spend 2 per cent of GDP on defence every year of this decade and by putting aside an additional £1.5 billion for a Joint Fund to be used by the Armed Forces and security and intelligence agencies, we’re sending the strongest signal to our allies and adversaries alike that Britain will not be cowed, that we will continue doing what is right – standing shoulder-to-shoulder with our allies to defend our way of life.

Incidentally, the US was first to applaud our stance, praising us as their “primary partner” and “indispensible ally”.
​
You can read the full speech from the Air Power conference here.