Work on new lights that will guide the Queen Elizabeth Class carriers safely into Portsmouth harbour is nearing completion as the top sections of the structures are put in place.

The final construction stage involves lifting the superstructures onto the pile foundations driven earlier in the year.

The 14 steel structures, which will rise 30 metres from the seabed, provide a platform for the lights that will be used to precisely position the 2 new aircraft carriers, the first of which will arrive at the city’s naval base in spring next year.

Each weighs around 22 tonnes and is being lifted into place using a 350 tonne crane barge. The lights are powered by a combination of solar panels and batteries and will only be lit when the carriers are either approaching or leaving their berths at Portsmouth. The infographic HMNB Portsmouth Navigation Lights Arrangement (PDF, 76.7KB) shows where the light will be placed. 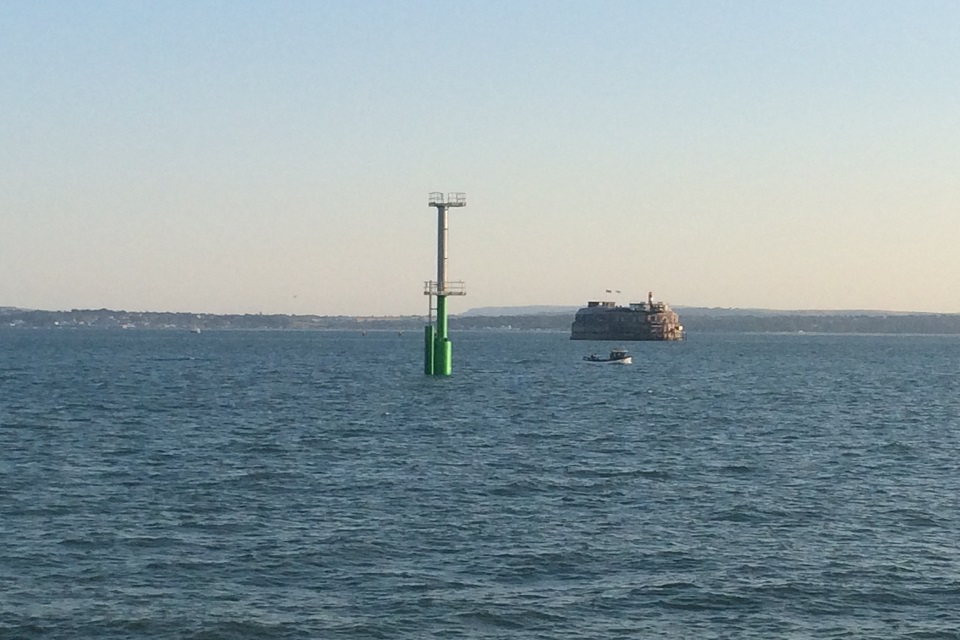 One of the navigational aids in situ. [VolkerWessels UK, 2016]. All rights reserved.

The navigation light towers are being installed as part of a £34 million package of infrastructure work being delivered on behalf of the Defence Infrastructure Organisation (DIO) by VolkerStevin to support the new carriers.


The navigation lights are essential to ensure the safe passage of the carriers into the naval base at Portsmouth. The work to install them represents a significant step forward in our preparations for the arrival of the 2 new ships which will be the largest ever constructed for the Royal Navy.
​
Gerrit Smit, project manager for VolkerStevin, added:


The installation of the navigational aids is another key milestone on this exciting project. The works are associated with challenges such as working in a busy harbour environment. Due to close collaboration with the Queens Harbour Master, the ferry operators and other stakeholders, we are ensuring safe passage as well as a safe delivery of the construction works.
​
In total around £100 million is being spent by the Ministry of Defence to ready the base the carriers, the biggest and most powerful ships in the Royal Navy’s history. At 280 metres, the HMS Queen Elizabeth is longer than the Houses of Parliament (265 metres). And its length is greater than the height of the Spinnaker Tower in Portsmouth (170 metres).

Under its contract VolkerStevin is also working to rebuild the Middle Slip jetty to accommodate the ships and providing a dedicated high voltage electrical supply to power the carriers.

DIO also awarded a contract to Boskalis Westminster Ltd to dredge the harbour to make it wide and deep enough for the ships.