As announced by Babcock International Group to the stock exchange this morning, it brings the value of Ministry of Defence (MOD) contracts with Ascent Flight Training to £2.8 billion. Their work delivering the four core elements of future military flying training will sustain 500 UK jobs.

The £1.1 billion rotary wing contract, awarded by the MOD to Ascent, will pave the way for the design, delivery and management of a new military helicopter aircrew training service until the early 2030s.

It will see the delivery of Airbus H135 and H145 training aircraft, and install new infrastructure and ground-based equipment at RAF Shawbury in Shropshire to train future aircrew to use aircraft such as Apache, Chinook, Merlin and Wildcat. It will also support a further 220 jobs, on top of the 280 already established by the UK Military Flying Training System (UKMFTS).

Today’s announcement follows February’s award of a £1.1 billion contract for fixed wing training, which will prepare future aircrew to fly aircraft such as Atlas, Voyager, Typhoon and Lightning II.

The award means all core training elements within UKMFTS, which covers training for rotary wing, fixed wing, fast jet and rear crew, are now under contract with a total value of £2.8 billion.


This is the final element in re-fashioning the UK Military Flying Training System into a state-of-the-art structure to develop suitably qualified aircrew to secure the future of air elements of our Royal Navy, British Army and Royal Air Force. Our Armed Forces will benefit from consistent, world class training across the board. It will ready them for the next stage of their careers and equip them with the skills they need to deploy on operations around the globe.

A £2.8 billion Defence investment with Ascent in the four core elements of this training system has, and will, bring new aircraft and new facilities to the UK, as well as sustaining around 500 jobs across the country. Supported by our rising Defence budget, which went up for the first time in six years in March 2016, these contracts will ensure that the UK continues to be a world leader in military flying training.
​ 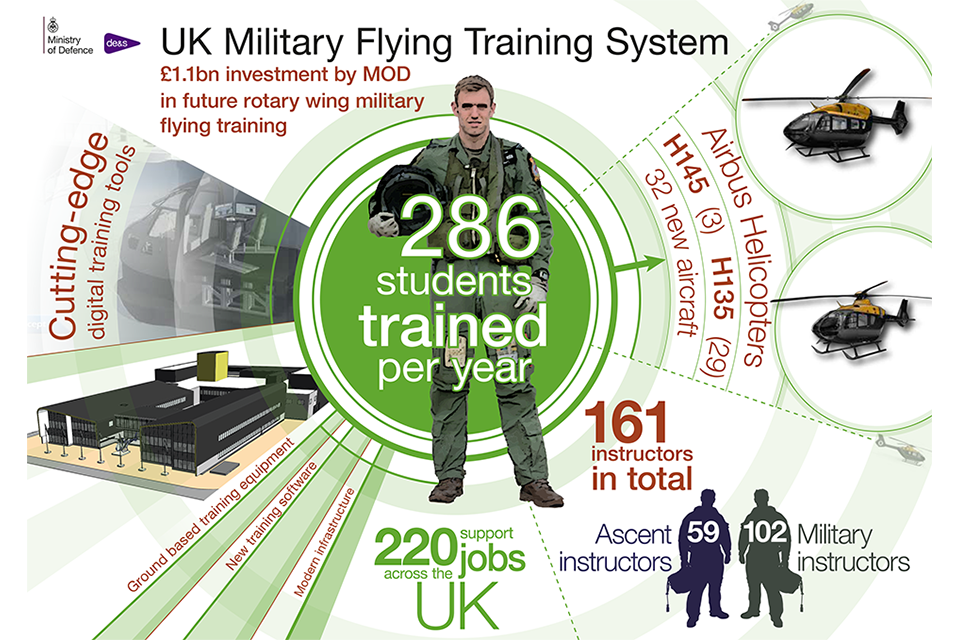 
This is a significant milestone for the UKMFTS programme and the future training of our Military’s aircrew. The modern aircraft, ground based training equipment and infrastructure procured to sustain the training out to 2033, along with a new training system design will optimise the students time in training and skill sets attained.

This will in turn ensure that they can be available to conduct operations in defence of the UK and her international interests earlier than ever before and in doing so will provide an overall saving to Defence.
​
Under the new contract, aircrew across the three Services will continue to conduct their basic and advanced rotary training at RAF Shawbury and Army Air Corps Middle Wallop. Aircrew selected for training in mountain and maritime helicopter operations will receive instruction at RAF Valley.


This contract will provide world-leading facilities for aircrew training in the use of our advanced aircraft such as Apache, Chinook, Merlin and Wildcat.

The success of the UKMFTS Programme demonstrates how the MOD, through DE&S, can create a positive and innovative partnership with industry to deliver real, tangible results, both commercially and for our Armed Forces.
​
Managing Director of Ascent Paul Livingston said:


The award of the Rotary and Fixed Wing contracts marks the delivery of two critical milestones for the UKMFTS programme. Modern training aircraft selected specifically to meet the bespoke needs of the UK’s Armed Forces will deliver optimised training alongside high tech simulators and classroom trainers.
​
Ascent, selected as the MOD’s flying training partner in 2008, will be required to deliver instruction, infrastructure and support required to provide military flying training across the three Armed Services until 2033.