Ministry of Defence said:
Aircraft Carrier Alliance workers at Rosyth in Scotland successfully attached a 1,000-tonne bow unit to the huge ship, completing the forward part of her hull.
Yesterday, 7 February, the forward island section of the ship departed from Portsmouth to join the other parts of the vessel in Rosyth.
The 2,000 staff employed on the site have now assembled two-thirds of the giant vessel. The ship is set to be launched next year before embarking on her sea trials.
Defence Equipment and Support Director of Ship Acquisition, Rear Admiral Steve Brunton, said:

The fitting of the upper bow unit means that the majority of the forward half of HMS Queen Elizabeth is now in place. The forward and aft island structures, containing the ship’s bridges, funnels and radar masts, will be fitted in the next few months, followed by the final hull and flight deck sections.
​
Assembly is progressing well with major additions almost every week. The team are working very hard at the moment with an increasing focus on completing the inside of the ship, whilst construction of HMS Prince of Wales is also well underway.
​ 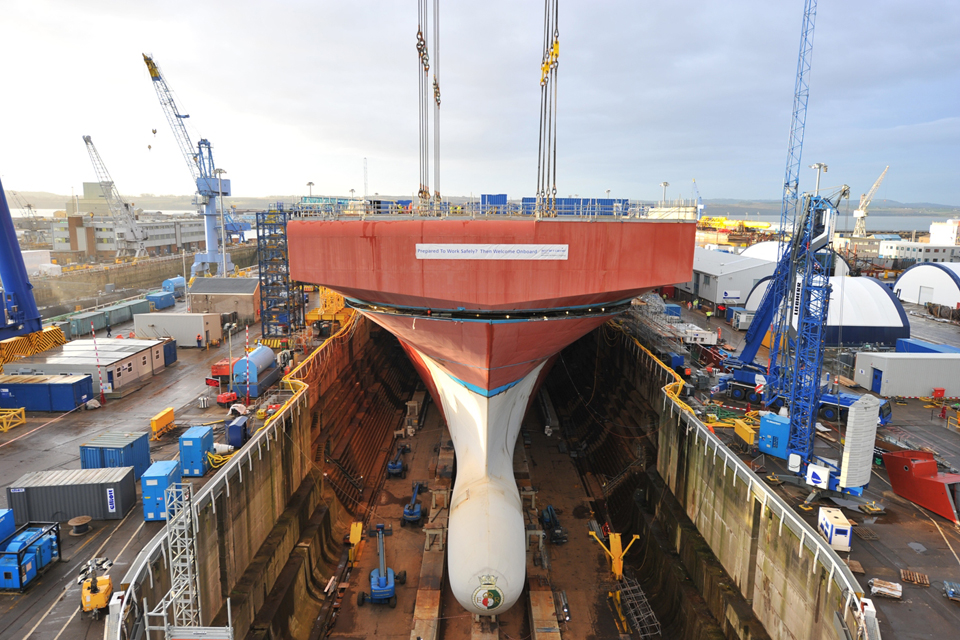 Everyone working to complete the Queen Elizabeth knows how important she will be to the future defence of the UK. The project is progressing well but there is still much to be done before she is complete. We are completely focused on the task in hand.
​
HMS Queen Elizabeth and her sister vessel, HMS Prince of Wales, will each displace around 65,000 tonnes, be approximately 280 metres long by 70 metres wide with an 11-metre draught, and can each accommodate up to some 1,600 personnel.
Both ships will be able to carry a mix of up to 40 aircraft routinely composed of 12 Lightning II combat jets and Chinook, Merlin and Apache helicopters as required.