The ministers viewed a demonstration of the new Ares protected mobility vehicle, part of the £4.5 billion Ajax family of armoured vehicles, at the factory in Merthyr Tydfil. The platforms will now continue going through a process known as Government Acceptance Training (GAT) before they are handed over to the Army.


I am delighted to see the Ares in action. This vehicle, and the others in the Ajax family, will give the British Army a multi-role, mounted fighting power and reconnaissance capability fit for the future. We continue to invest in the best equipment for our Armed Forces, and I’m delighted to support such strong investment in Wales
​
The ministers were also given a tour of the facility which was only opened in 2016, bringing around 250 jobs to the area. The MOD is the biggest provider of apprenticeships in the UK and many of those the ministers met were manufacturing and mechanical apprentices, keen to talk about their work in the factory. The Ajax build programme is also sustaining 300 jobs at General Dynamics’ nearby Oakdale site. 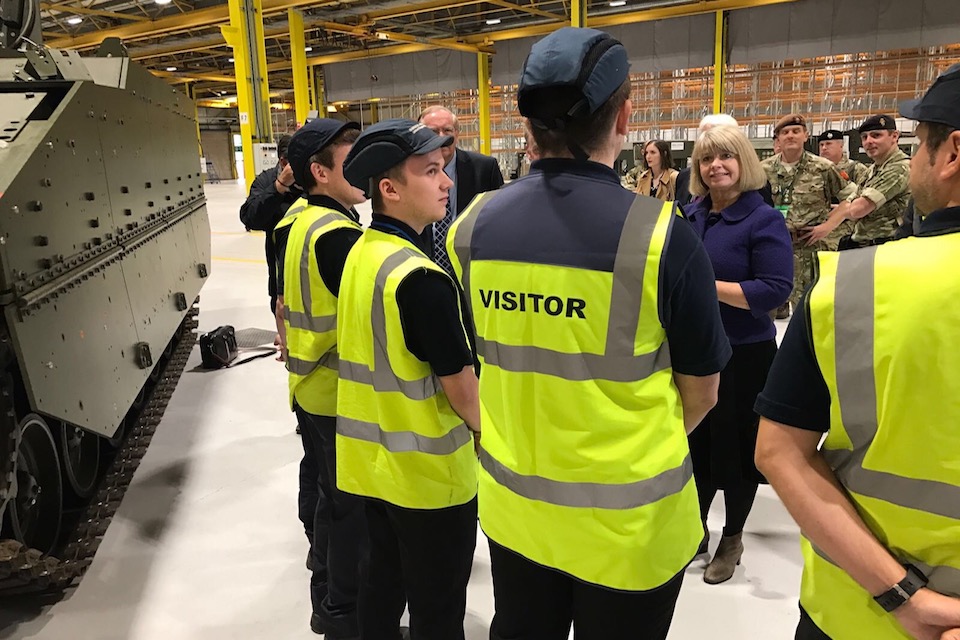 Defence Minister Harriett Baldwin met with apprentices working on the Ajax programme at the factory in Merthyr Tydfil.

Backed by a rising defence budget, last year the MOD spent £870 million with Welsh businesses, helping to build a stronger economy and keep Britain safe, with Ajax representing the biggest single order for a UK armoured vehicle in 30 years. MOD investment in Wales works out to £280 per capita.

Minister for the UK Government in Wales Guto Bebb, said:


The UK Government is delivering on its ambitions for economic growth in Wales and is helping to improve people’s lives. Here in Merthyr Tyfil, General Dynamics are building next generation vehicles for the Army, providing jobs and skills that drive a stronger economy for Wales and for the UK.
​
The six variants in the Ajax programme – Athena, Ajax, Ares, Apollo, Atlas and Argus - are due to come into service in 2020, providing a full suite of medium armoured vehicles and capabilities. The ‘GAT’ process for the Ares platforms is now being undertaken by the Army, conducting acceptance for both the British Army and Defence Equipment & Support (DE&S) at the facility in Merthyr Tydfil.

The range of Ajax variants will form a key component in the Army’s modernised warfighting Division conducting full-spectrum and network-enabled operations. They will operate in combined-arms and multinational situations across a wide-range of future operating environments.

The news comes after several other milestones revealed at the Defence and Security Equipment International (DSEI) exhibition last week. These included: