Ministry of Defence said:
The 30-year-old warship has spent the past 6 months patrolling the Atlantic. She will decommission in June, having clocked up 793,345 miles, as the old Type 42 destroyers make way for the new Type 45s.
Edinburgh left her home port of Portsmouth in September for routine operations across the North and South Atlantic in support of British interests worldwide. 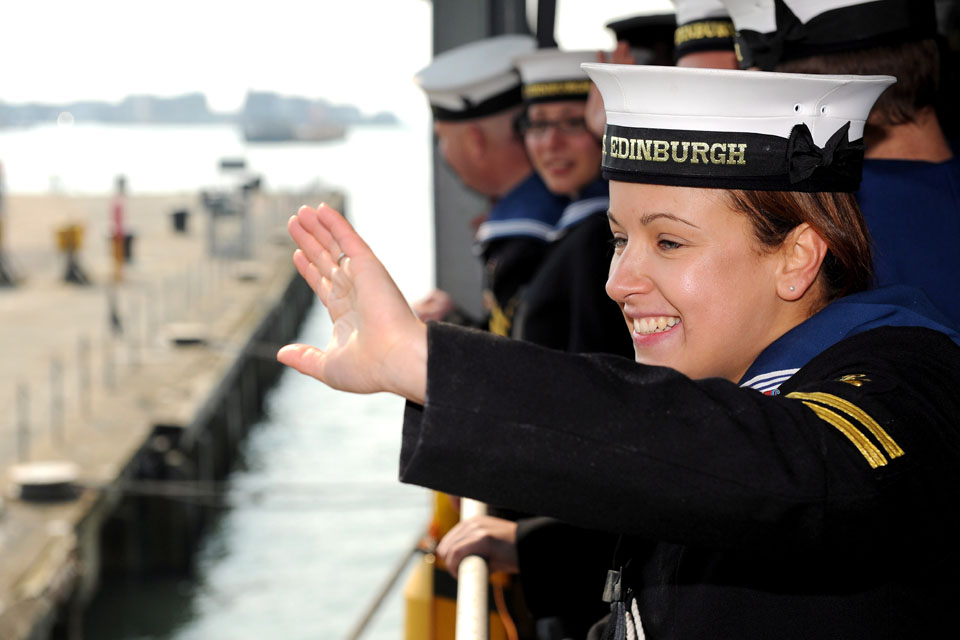 Returning home after a long period of operations is always a special event and, as the ship’s company is reunited with families and friends after six months away, they can reflect on a job well done and take some well-deserved leave.
​
However, as this also marks the end of the operational life of the Type 42 destroyer, this deployment has been particularly poignant for all of us on board. I am extremely proud of the way the team in Edinburgh has, through sheer commitment and dedication, upheld the reputation that this exalted class has earned over the past 4 decades and also upheld the reputation of the Royal Navy in the protection of UK interests worldwide.
​ 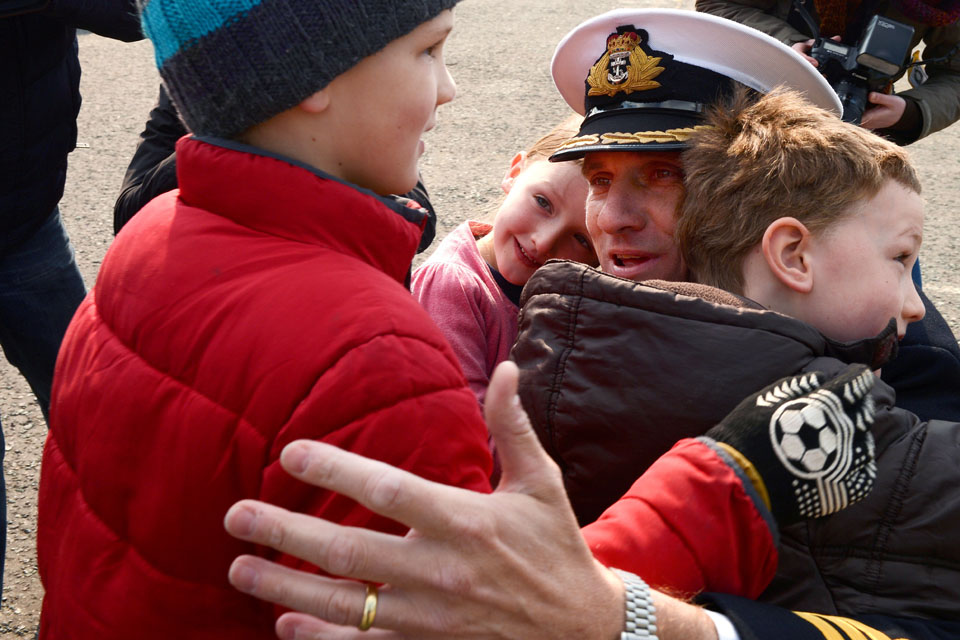 Commander Nick Borbone, Commanding Officer HMS Edinburgh, is greeted by his children on his return home [Picture: Leading Airman (Photographer) Chris Mumby, Crown copyright 2013][h=3]HMS Edinburgh[/h]Edinburgh was built by Cammell Laird at Birkenhead and launched in April 1983. She was commissioned in December 1985.
Her first deployment was to the Arabian Gulf in 1987, escorting numerous merchant ships safely through the region.
The following year HRH The Duke of York joined as one of the ship’s officers, serving on board during a 6-month round-the-world deployment.
In 1996, Edinburgh rescued the crew of a crippled sailing boat while on patrol in the Gulf. She despatched her Lynx helicopter to rescue all 9 Pakistani crewmen from the vessel after it took on water in stormy conditions and eventually sank. 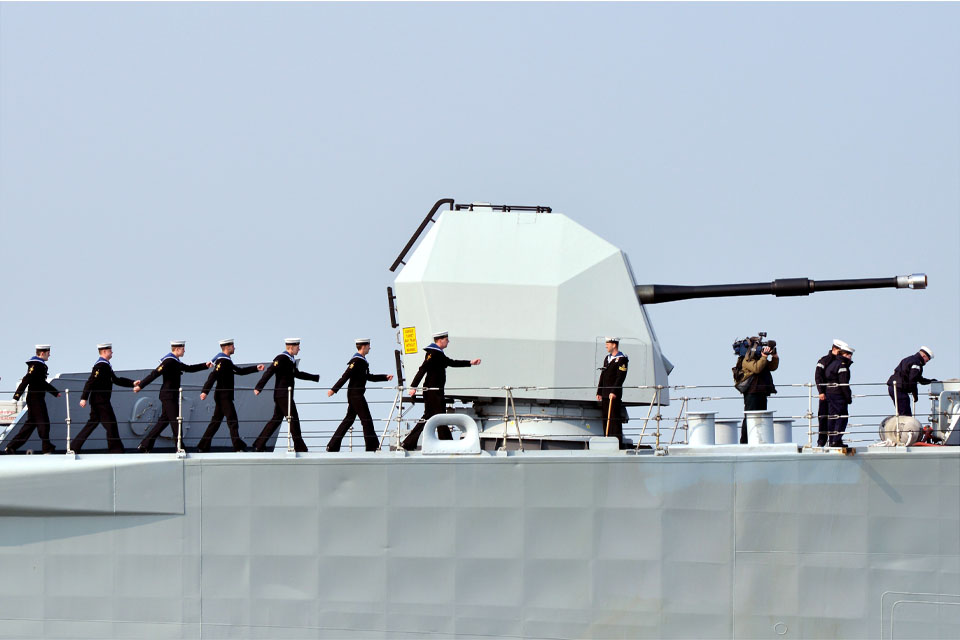 Members of the ship's company march past HMS Edinburgh's 4.5-inch gun [Picture: Leading Airman (Photographer) Gary Weatherston, Crown copyright 2013]She took part in the second Gulf War in 2003, supporting Royal Marines ashore and acting as escort to the helicopter carrier HMS Ocean.
The following year, Edinburgh deployed to the Mediterranean and was involved in Operation Active Endeavour, monitoring sea lanes as part of the war on terror.
And, in 2008, during operations in the Gulf she seized a drugs cargo – stashed on board a sailing boat - worth several million pounds.
Edinburgh entered refit in 2010 and spent most of the following year in the South Atlantic before returning there during her final overseas deployment. 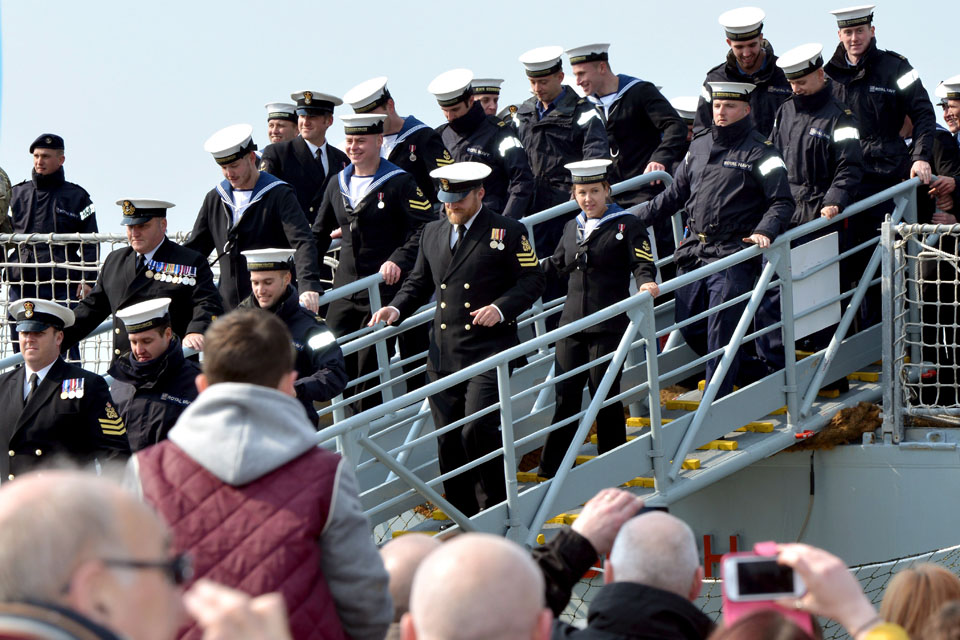 Members of HMS Edinburgh's ship's company descend the gangway at Portsmouth [Picture: Leading Airman (Photographer) Gary Weatherston, Crown copyright 2013]Type 42 air defence destroyers have been the backbone of the Royal Navy’s fleet since the first - HMS Sheffield - was commissioned in 1975. Edinburgh was the 14th and final Type 42 to enter service.
The Type 42s are being replaced by a fleet of Type 45 destroyers. HMS Duncan, the sixth and final Type 45 was formally handed over to the Royal Navy by shipbuilder BAE Systems on 22 March 2013.