Ministry of Defence said:
The soldiers, all members of D Company, 1st Battalion The Royal Welsh, deployed on an exchange programme with the Indian Army to develop counter-insurgency and survival skills in a very testing climate alongside soldiers from the 17th Battalion of the Kumaon Regiment, who travelled to Belgaum especially for the exercise.
Troops from Wales and the north-west of England took part in shared training sessions at Belgaum Training Centre – home of the Maratha Light Infantry and the Indian Commando Training Centre.
The culmination of the training saw the soldiers deploy on a series of exercises with their Indian colleagues into the mountain forests. The Royal Welsh were selected for the role due to their recent experience of Afghanistan, having returned from Operation Herrick 16 in October last year.
Officer Commanding D (Tipu) Company, Major Richard Sernberg, said:

These 2 armies have different recent military experiences, different equipment, and our soldiers come from very different backgrounds. There is much that we can learn from the Indian Army and hopefully we have offered the Indians the benefit of our recent Afghanistan experience.
D Company is the product of an Army that has been solely focused on operations in Afghanistan. This exercise was our opportunity to relearn some of the basic generic skills that we may require on future operations.
​ 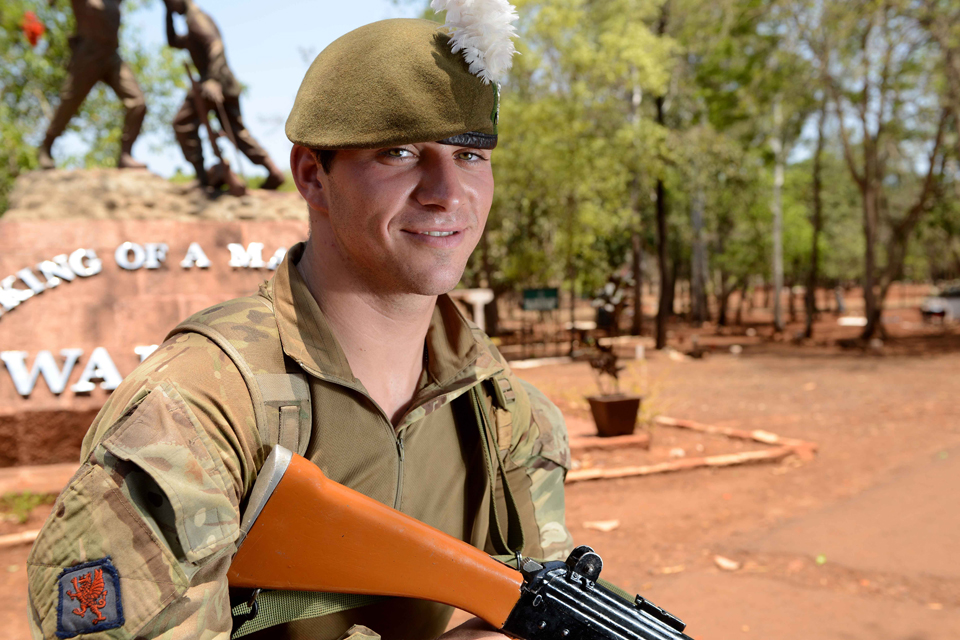 Fusilier Robin Wyn Griffiths, D Company, 1st Battalion The Royal Welsh [Picture: Corporal Andy Reddy RLC, Crown copyright]Joining the Royal Welsh soldiers for the first part of the trip were 4 British subject matter experts, requested by the Indians to exchange knowledge and experiences in the areas of countering improvised explosive devices, media, force protection and stabilisation.
While the Indians do not conduct expeditionary operations in the British way, they have vast current experience of countering insurgencies in their own country.
For the Royal Welsh and the Kumaon soldiers the preparation training for the 4 short test exercises included learning Indian infantry skills to help the companies gel when deployed, traditional Indian combat training such as jungle survival skills, confidence-building on a high-wire raised 70 feet above a deep water pool, and the handling of vipers, cobras and rat snakes.
Among the other experiences to be shared was the cricket match between the British and Indian soldiers and cultural visits to Belgaum and Goa.
Fusilier Lee Jones, aged 24, said:

The Indian soldiers are really switched on and really nice people. During survival training they asked me to catch and hold a rat snake. I was very wary of its bite but, once I held it, it was great.
​
Fusilier Robin Wyn Griffiths, aged 21, said:

It was great to learn new skills with the Indian soldiers during the exercise and seeing how the Indian Army does their soldiering. It was really hot but we worked around the heat of the day and we quickly got used to it.
​

Another Indian experience for British Soldiers.:tp::happycry:

sgtpepperband said:
...whilst wearing US kit?! :wink:
Click to expand...

Well spotted SPB. Sorry couldn't find a file photo of Tommy Atkins coiling one out for Queen and Countryottytrain5:

Wouldn't be the first time. My Grandfather was RSM attached to the Indian Army in WW2!
You must log in or register to reply here.