Verifying the research submitted was crucial in identifying the final resting place of Second Lieutenant (2 Lt) Bertie Swallow of the 18th Battalion Lancashire Fusiliers, who was killed in action due to the injuries he suffered on 31 October 1918. Almost a century after he was buried as an ‘Unknown Officer of the Lancashire Fusiliers’, a rededication service was held on 25 July 2017 at the Commonwealth War Graves Commission (CWGC) Harlebeke New British Cemetery in Belgium.

The service, which was a fitting tribute to the sacrifice made by 2 Lt Swallow, was organised by the MOD’s Joint Casualty and Compassionate Centre (JCCC), part of Defence Business Services, and was conducted by the Reverend Stuart Richards, Chaplain to 1st Battalion, Royal Regiment of Fusiliers.


It is thanks to a member of the public who has submitted all of his research that this grave has been able to be identified.


I’m delighted that we have been able to pay tribute to 2 Lt Bertie Swallow here this morning and to give him back his name.
​
2 Lt Swallow joined the Royal Field Artillery on 9 December 1915 before moving to the 18th Battalion Lancashire Fusiliers on 5 September 1918. Although he was reported wounded on 31 October 1918, his family didn’t receive the news that he had died on that date until 28 November 1918. At the time, there was no burial location recorded or even any evidence that his body had been recovered and buried locally.

JCCC now know that Bertie Swallow was buried as an ‘Unknown Officer of the Lancashire Fusiliers’ in Harlebeke New British Cemetery in Belgium. Records from this cemetery show that the original burial location was just east of the village of Kloosterhoek, where there were no British forces until the 18th Lancashire Fusiliers arrived on 31 October 1918.

There are only 4 other Lancashire Fusiliers officers who were killed within a few weeks of Bertie Swallow’s death and who have no known grave, all of them can be excluded as their battalions were between 30-100 kilometres away.

This proved to the JCCC that there is no other candidate for the unknown grave in Harlebeke. No other officer of the Lancashire Fusiliers is listed as missing or killed in the relevant place and time period. His field burial site was not the scene of any armed conflict until the arrival of the Lancashire Fusiliers on 31 October 1918. By elimination, this confirmed the final resting place of 2 Lt Bertie Swallow. 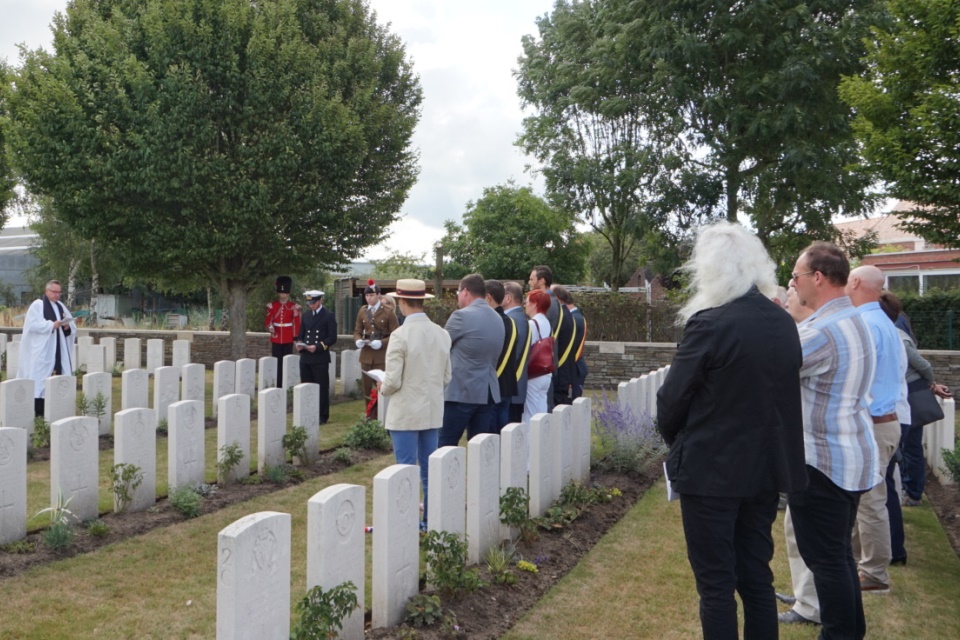 
It is a privilege to tend the flame of remembrance and to ensure that those who made the supreme sacrifice a century ago have a memorial and a name for future generations.
​
Almost 100 years after he died, 2 Lt Swallow’s grave has been rededicated and a new headstone bearing his name has been provided by the Commonwealth War Graves Commission (CWGC).