As members of the crow family, chough typically live for no more than ten years. However one elderly bird at Castlemartin training area in Pembrokeshire has now reached a remarkable 21 years old. RSPB (Royal Society for the Protection of Birds) records indicate that the previous oldest known chough lived to be 20.

The male bird’s age is known thanks to a metal ring placed on his leg by the Countryside Council for Wales, now Natural Resources Wales. Chough are quite rare in the UK with only about 350 breeding pairs in Great Britain and a further 150 breeding pairs on the Isle of Man.

The RSPB gives chough ‘Amber List’ conservation status due to its small and declining population. The birds are found in some western areas of the British Isles including Cornwall, south west Scotland and the west coast of Ireland.

Living on an active military training area is actually beneficial to many animal and plant species as it reduces the often damaging impact of humans on the landscape and environment.

The Defence Infrastructure Organisation (DIO), which manages and maintains land which belongs to the MOD, works to protect wildlife living on its sites. At Castlemartin, this includes imposing seasonal restrictions to prevent climbers from accidently disturbing the chough’s cliff nest sites. This is supported by the British Mountaineering Council and the Pembrokeshire Coast National Park Authority.

Castlemartin training area is used by all three services for various training activities including armoured vehicle firing, fast jet training and use of boats.

Other species known to thrive on the land at Castlemartin include guillemots and razorbills, some rare plants and marsh fritillary butterflies. 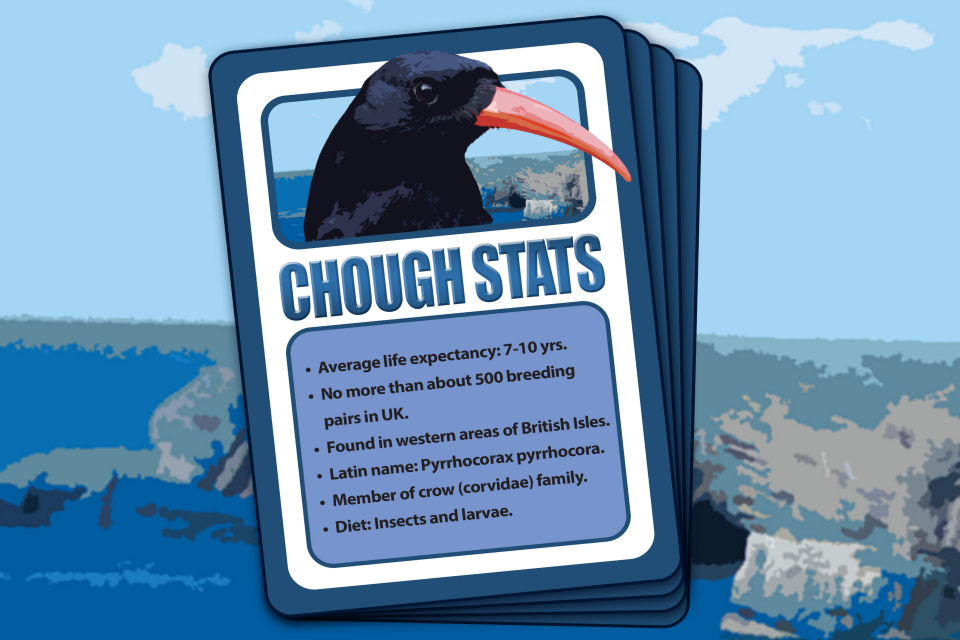 Some key facts about the Chough. [Crown Copyright MOD 2015]


Supporting military training is the priority for the DIO, but as responsible landowners we work hard to protect the flora and fauna found on our estate so it’s fantastic to see chough thriving in this location and one in particular living to such a ripe old age.
​
Lynne Houlston, Ranger for the Pembrokeshire Coast National Park Authority, said:


I’ve been in post for 12 years and have been monitoring the chough at Castlemartin from day one so it’s great to see this particular bird reach such an advanced age. I work closely with staff from DIO and their contractors, Landmarc, to monitor and protect the wildlife on Castlemartin and consider myself very lucky to have a job I love so much.
​
Key facts about the chough: