Ministry of Defence said:
Lance Corporal Kennedy Mutonga Muia, aged 28, from Stoke-on-Trent, has received a Commander’s Coin from the Commander of Task Force Helmand, Brigadier Bob Bruce, for his work as a chef while deployed in support of the Scots Guards in Afghanistan.
Lance Corporal Muia, originally from Kenya, was awarded the commendation for his ‘selfless dedication to duty, always putting others before himself’, as his citation reads.
He received the award alongside 7 other Royal Logistic Corps chefs who were also completing their tours of the province.
Lance Corporal Muia’s citation goes on to say:

His achievements cut across professional, sporting, spiritual and social lines, and have touched soldiers’ lives at both the collective and individual levels.
​
Lance Corporal Muia, who puts it slightly differently, said:

Most of the guys just felt comfortable talking to me, I think, just because I put on a smile every day, even when things were bad.
​ 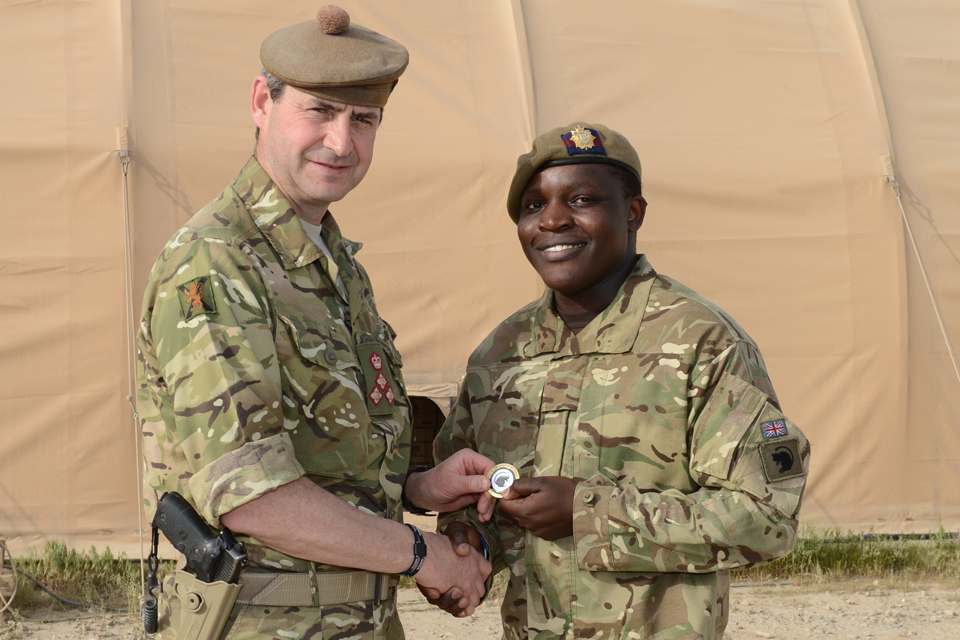 I have no words for the first time in 28 years, I am speechless. It encourages me that someone has seen my hard work.
​
Sometimes when you are a person who gives morale, you need someone else to give you morale.
​
[h=3]Feeding in a FOB[/h]The tour was a challenging one for Lance Corporal Muia. Normally based in Catterick with the Scots Guards, he found himself feeding them in Forward Operating Base (FOB) Ouellette. He said his biggest challenge was “being in an environment where you’re not really sure what’s going to happen next.”
As well as cooking in FOB Ouellette, Lance Corporal Muia moved around supporting other smaller bases, sometimes cooking for 100 soldiers with only a small team to help.
In addition to receiving his award, Lance Corporal Muia has also been promoted to Corporal.
Despite his admission that his ‘faith was tested’, he said:

I came out the other side shining, and I am looking forward to going to my church. It has been 7 months since I went, and that is way too long.
​