Ministry of Defence said:
During a month-long visit to 16 Air Assault Brigade in Colchester, 10 cadets from the École Militaire Interarmes de Saint-Cyr Coetquidan were given a taste of life in the British Army’s rapid reaction force as the 2 armies develop closer links.
From taking part in infantry and attack helicopter exercises to familiarising themselves with weapons and vehicles, the cadets gained an insight into the capabilities and skills that make the brigade such a potent and adaptable force.
The French cadets are experienced soldiers training to be commissioned as officers, with the placement intended to develop their knowledge of the British Army and also their language skills.
During his visit, Second Lieutenant Luc Roman-Amat worked with 8 Field (Para) Company, 7 Air Assault Battalion Royal Electrical and Mechanical Engineers. He said:

It is part of our training to do an internship with a foreign army, to learn how different armies operate and improve our language skills. I have been given a really good view of everything 8 Field Company does, from repairing vehicles and weapons to how junior soldiers are trained and selected for promotion.
​
I have learned new ideas and different ways of working which I will take back to France with me to shape how I work as a platoon commander.
​
Lieutenant James Campbell, who hosted Second Lieutenant Roman-Amat, said:

We’ve treated Luc as another member of the team and it’s been an excellent experience for our soldiers to work alongside a French officer.
​
As a signaller he comes from a different technical background and has given us an alternative view on how we operate.
​ 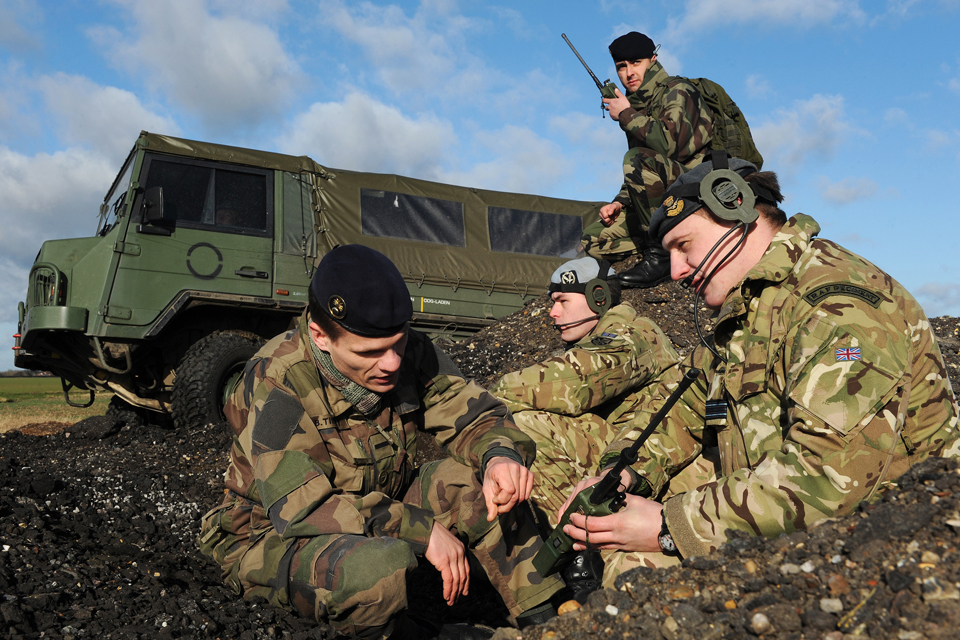 2 PARA has been very welcoming and we have been fully involved in the life of the unit. Going on exercise at Otterburn in heavy snow has been a highlight, because of the different style of training - compared to the French Army there was more use of helicopters and we do not do live firing exercises.
​
Second Lieutenant Julien Fuselin was attached to 3 Regiment Army Air Corps, an Apache attack helicopter unit based at Wattisham.
He said:

It has been very interesting to observe the similarities and differences in how the British and French armies do the same job. My background is as a signaller, so it has also been valuable to broaden my knowledge and learn about attack helicopters.
​
16 Air Assault Brigade is at the forefront of closer military co-operation between Britain and France. It is working with the French 11e Brigade Parachutiste to develop an Intermediate Combined Joint Expeditionary Force for contingency operations, ranging from disaster relief to war-fighting.
16 Air Assault Brigade is the British Army’s largest brigade with 7,400 soldiers, combining the speed and agility of airborne and air assault troops with the potency of Apache attack helicopters.
The brigade deployed to Afghanistan between October 2010 and April 2011 and since its return has focused across a number of commitments, most significantly its core role as the Airborne Task Force, ready to deploy on operations anywhere in the world at short notice.

This sounds to me like a start of something sinister!!!! An EU Army.