Good morning and welcome to the Fifth Friends of Yemen Ministerial meeting. I am delighted to be joined by my fellow Co-Chairs the Foreign Minister of Yemen and the Minister of State of Saudi Arabia, and I’d also like to welcome – for the first time – Switzerland to our meeting. It is a pleasure to have you with us.
​
We are now at the half way point of Yemen’s two year transition; and so this is a critical moment for the country and for its people. President Hadi was elected last February with a mandate for change, allowing the people of Yemen to decide their own future through the National Dialogue Conference, before elections next February. And I’ve received this morning a message of support from the president.
​
In New York last September, our discussions focussed on the National Dialogue Conference, preparing for elections, and pledging $1.5 billion in aid to help Yemen.
​
The focus of today’s meeting is turning those financial pledges into results that benefit the lives of ordinary Yemenis. As we know Yemen faces a grave humanitarian situation. Over 13 million people – that’s half of the population – require some form of assistance to help them put food on the table.
​
I believe there are three urgent priorities for Yemen, which this meeting must actively promote:
​
First, the National Dialogue Conference must allow the Yemeni people, through their representatives, to decide for themselves the future of their nation. This is the only way to achieve a peaceful settlement, in a forum in which Yemenis can discuss their grievances and propose solutions.
​
That dialogue must of course be inclusive, with representatives from the north and south of the country, as well as women and members of civil society. We all have no doubt that there will be differences of opinion, but all should be tolerant of each other’s views, and see this as the place to address conflict and its underlying causes.
​
There is a small minority who are determined to try and stop the National Dialogue Conference from succeeding, including from outside Yemen. We should be clear: the international community will not tolerate actions that could undermine transition. And the United Nations Security Council has stated on several occasions, most recently on 15 February, that it will act against those who attempt to block or derail this process.
​
Second, we need to ensure that steady progress is made towards the holding of successful elections in 2014. Whether the Yemeni people choose a federal or regional structure, it is imperative they choose their elected representatives next February. These elections will be the final point of transition, and the Yemeni people want reassurance that they will be well organised and ready on time. We all have to work together to make that possible.
​
And finally, it is vital that the pledges we have made are translated into progress on the ground, in the way President Hadi has asked for in his message, so that the Yemeni people see an improvement in their daily lives. Otherwise, there is a risk that public support for the National Dialogue and political transition could diminish. That means ensuring there is sufficient emergency humanitarian support for those in most need, as well as improved access to water, electricity, and greater opportunities for employment.
​
So, I hope in the discussions we have and in the contributions around the table we can focus on this. I look forward to hearing updates on how pledges are being spent in accordance with the priorities defined by the Government of Yemen. And we of course will be hearing from the Government of Yemen on procedures for doing so. We must all re-double our efforts to assist them in enacting the reforms that are necessary to improve the lives of Yemeni citizens. The people need positive results; and not empty promises.
​
So this meeting is about implementation and action.
​
It is my pleasure to hand the floor to the Minister of State of Saudi Arabia.
​ 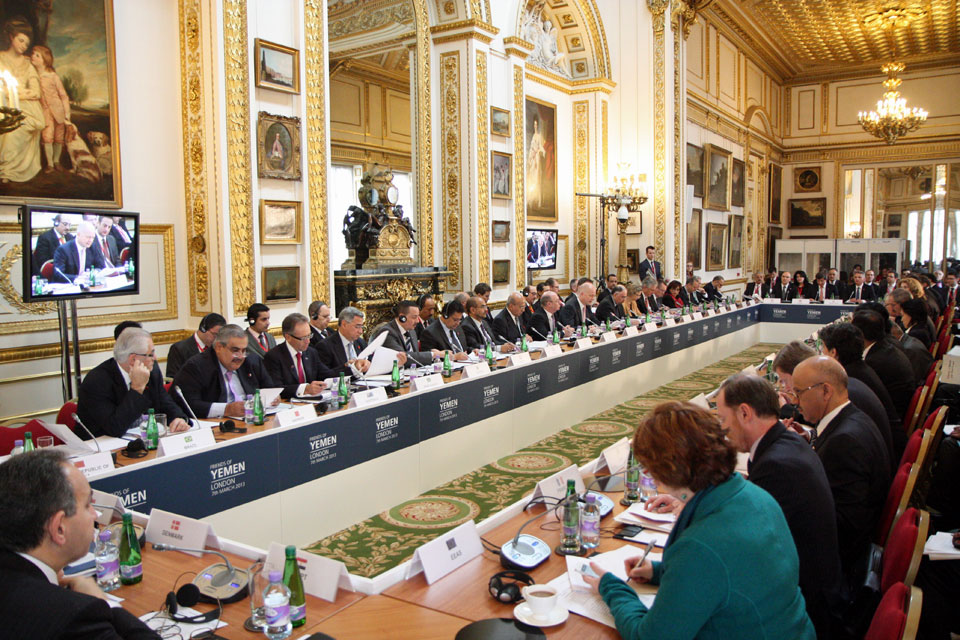 Ministers gather for the fifth Friends of Yemen meeting in London today.[h=3]Further Information[/h]Read more about the meeting at our Friends of Yemen website pages
Find the Foreign Office on Twitter, Facebook & Google+

Book Reviewer
I'm sure we will be giving money or Tanks away.