Ministry of Defence said:
Foreign Secretary William Hague and Secretary of State for Defence, Philip Hammond, met with Foreign Minister of the Russian Federation, Sergey Lavrov, and Defence Minister of the Russian Federation, Sergey Shoygu in London for the Inaugural UK-Russia Strategic Dialogue.
Speaking at a press conference following the UK/Russia joint Foreign and Defence Ministerial talks on 13 March 2013, the Foreign Secretary said:

It is a great pleasure to welcome Foreign Minister Sergei Lavrov and Defence Minister Sergei Shoigu to London today, and to host them both with the Secretary of State for Defence.
​
This is the first such joint meeting in the format of the UK and Russian Foreign and Defence Ministers meeting together. We discussed a great range of subjects. We discussed the E3+3 talks with Iran and the need for all parties to encourage Iran to accept the offer that was presented in the recent negotiations. We reviewed developments in Afghanistan where we’re grateful for Russian cooperation over the plans for the drawdown of our troops, and we agreed to continue to work together on security and stability in Afghanistan and the region.
​
2013 is an important year for both our countries internationally as we hold the G8 Presidency and Russia holds the Presidency of the G20. We’ve had discussions about our objectives for the G8, including support for countries in transition in the Middle East and including my personal initiative of preventing sexual violence in conflict.
​
We discussed efforts to secure a robust and effective and legally binding Arms Trade Treaty at the conference in New York that begins next week and that remains an urgent priority for us in the UK. We welcomed a number of recent developments of the bilateral relationship, including the lifting of the Russian ban on British beef, which we look forward to seeing soon on dining tables in Russia, and we are looking forward to the 2014 UK Russia year of culture which I hope will foster greater links between the people of our countries and we have just signed a joint statement formalising that agreement.
​
So this is a relationship with much that is going on that is strong and welcome. It’s one in which we are able to speak frankly and openly to each other on all these issues of common interest as well as issues where we disagree including of course at times on human rights issues and on the subject that I know many will want to ask about and that is at the top of the international agenda, and rightly, at the moment, and this is the crisis in Syria.
​
This is a testing time, a time of a humanitarian crisis reaching catastrophic proportions, with over a million refugees in the region, and more than 70,000 people tragically killed. The United Kingdom and Russia share many common objectives in Syria. Both our countries seek an end to the appalling suffering and to the instability; we both support a political transition in Syria on the basis agreed in Geneva last year; we warn Damascus about the use of chemical and biological weapons; the United Kingdom welcomes the courageous response taken by the National Coalition President al- Khatib, that he is willing to enter into talks with elements of the Assad regime, and we welcome Russia’s willingness to develop a fuller dialogue with the National Committee, and we hope that Mr al-Khatib will visit Moscow soon. We want to know that the Syrian regime is serious about talks with the opposition in return, but we are clear that dialogue and negotiations are the only way to achieve a political transition and end the bloodshed. We want to see the Assad regime respond seriously to the offer of talks in the interests of meeting a political resolution and this means being clear in their willingness to engage in talks within the framework of the Geneva communiqué.
​
As long as a political transition is not found we will increase our support for the opposition and the Syrian people to try to save lives and promote a political solution. So we had a very thorough discussion on this today but we didn’t reach agreement on any specific plan for talks between the National coalition and the Assad regime or on action at the UN Security Council but we did discuss the shape that such talks should take and we did very much agree on the need for progress on this and the need for a political settlement in Syria and I think we found enough common ground on our concerns and our objectives to certainly continue our efforts to reach full agreement on these matters.
​
So I’m grateful to Foreign Minister Lavrov and Defence Minister Shoigu for travelling to London today, for the detailed and thorough nature of our talks and the positive atmosphere in which they were conducted and I look forward to further discussion and cooperation in the months ahead and to continuing this format of foreign and defence minister discussions in the years to come.
​ 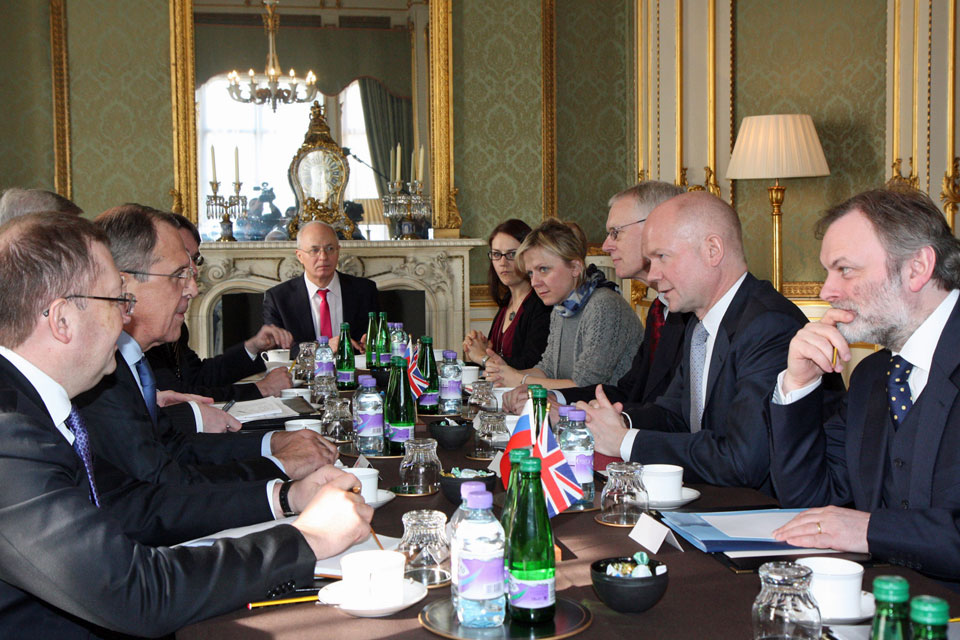 Will Hague be asking them to withdraw their warships from the Eastern end of the Med. We can't have countries supporting a regime that Prince Charles is against.

Newsnight last night, Russian big cheese in foreign affairs said it had respect for Cameron as he was not looked upon as being America's poodle as was the case during Blair/Brown years.
You must log in or register to reply here.