Ministry of Defence said:
This will be the first time the UK has an Embassy in Somalia since 1991 when the Embassy was closed and the Ambassador and his staff evacuated. This makes the UK the first EU country to re-open an Embassy in Somalia.
The Foreign Secretary was joined at the opening by the Somali President Hassan Sheikh Mohamud. The Foreign Secretary and the President also discussed the Somalia Conference taking place in London on 7 May.
Ahead of a meeting taking place at the Somalia Conference on preventing sexual violence, the Foreign Secretary also attended a discussion between senior members of the Somali government and prominent civil society leaders. The meeting was an opportunity for attendees to raise issues and concerns and to discuss plans for working together to tackle sexual violence.
Speaking from the new Embassy site, the Foreign Secretary said:
“I am delighted to announce that today, 22 years after we evacuated our diplomats from Mogadishu, we are raising the Union Jack to mark the formal opening of a new British Embassy. Somalia has been through a dramatic shift over the last year but continues to face huge challenges. We should be under no illusions as to the sustained efforts that will be required, in Somalia and from its international partners, to ensure that Somalia continues to make progress.
“Today’s opening is testament both to the strength of the UK/Somalia bilateral relationship and to UK government’s commitment to work with the Federal Government of Somalia as they rebuild their country after two decades of conflict. I am grateful to the Somali President for joining me today to mark this special occasion.
“We will continue to work closely with the Somalia Government on shared priorities, which include tackling conflict, countering terrorism and piracy, providing humanitarian assistance, and promoting UK interests in Somalia and the region.”
The Embassy has been built on a site leased to HM Government by the Federal Government of Somalia. 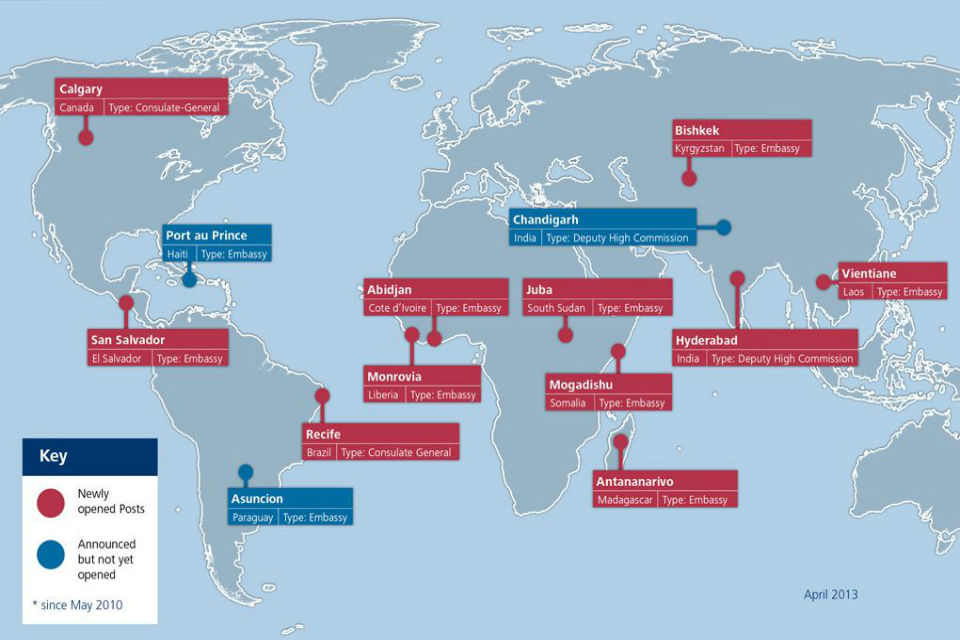 New diplomatic posts as of April 2013. View the full image at www.flickr.com/foreignofficeThe Foreign Secretary continued:
“Next month, the Prime Minister and President Hassan Sheikh Mohamud will co-host a Conference in London which aims to provide international support for the President’s priorities of creating security, rebuilding the justice system, and reforming government finances. I met President Hassan earlier today to discuss the Conference, and also attended a discussion with representatives of civil society on preventing sexual violence. I am pleased that the Somali government has demonstrated its commitment to tackling this serious issue and that there will be a further discussion of practical steps of how to do this at the Somalia Conference in London.”
[h=2]Further information[/h][h=3]British Embassy in Mogadishu[/h]The former British Embassy in Mogadishu, located close to the port, was closed in January 1991, and the building is now a ruin.
The Foreign Secretary today opened the core office within the new British Embassy at Mogadishu International Airport, with a short ceremony and flag-raising. This office will allow the British Ambassador, Matt Baugh, and his staff to work and communicate with London while the rest of the Embassy compound is completed. The Embassy is scheduled for completion by the end of July.
[h=3]Somalia Conference in London[/h]Prime Minister David Cameron and President Hassan Sheikh Mohamud will co-host the Somalia Conference at Lancaster House in London on 7 May. The Conference aims to provide co-ordinated international support for the Somali Government’s priorities as they rebuild their country.
[h=3]Preventing Sexual Violence Initiative[/h]Sexual violence in conflict is widespread. Most frequently it is carried out by one group against another with the deliberate intention of destroying, degrading, humiliating and scaring political opponents or entire ethnic and religious groups.
The Foreign Secretary’s Preventing Sexual Violence Initiative aims to replace the culture of impunity with one of deterrence - by increasing the number of perpetrators brought to justice both internationally and nationally; by strengthening international efforts and co-ordination to prevent and respond to sexual violence; and by supporting states build national capacity. For more information see the G8 declaration on preventing sexual violence in conflict.
Follow information about the Somalia Conference on Twitter and Facebook