Ministry of Defence said:
After being alerted to the situation by Milford Haven Coastguard, the duty RAF search and rescue (SAR) helicopter from A Flight, 22 Squadron, arrived on the scene to find French fishing vessel, ‘Alf’, being tossed around in the water like a piece of driftwood.
Weather conditions were so atrocious that the ‘Alf’ was pitching and rolling violently, climbing and descending vertically 40 feet with each swell.
The ‘Alf’s’ captain spoke very little English, so a 3-way translation service was arranged via satellite phone involving English and French Coastguards and the crew of Rescue 169.
They managed to brief the French captain about how the RAF helicopter crew intended to get the crewman off the fishing boat.
‘Alf’s’ captain passed on a message revealing the injured crewman’s condition had continued to deteriorate and he had unstoppable bleeding from the head, so a rapid airlift was now absolutely vital.
Winchwoman Sergeant Rachel Robinson made 6 separate, hazardous descents on the winch wire in an attempt to reach ‘Alf’s’ deck. The seas were so violent that Sgt Robinson was repeatedly snatched from the deck as the boat plunged into wave troughs far faster than the winch cable could be paid out. 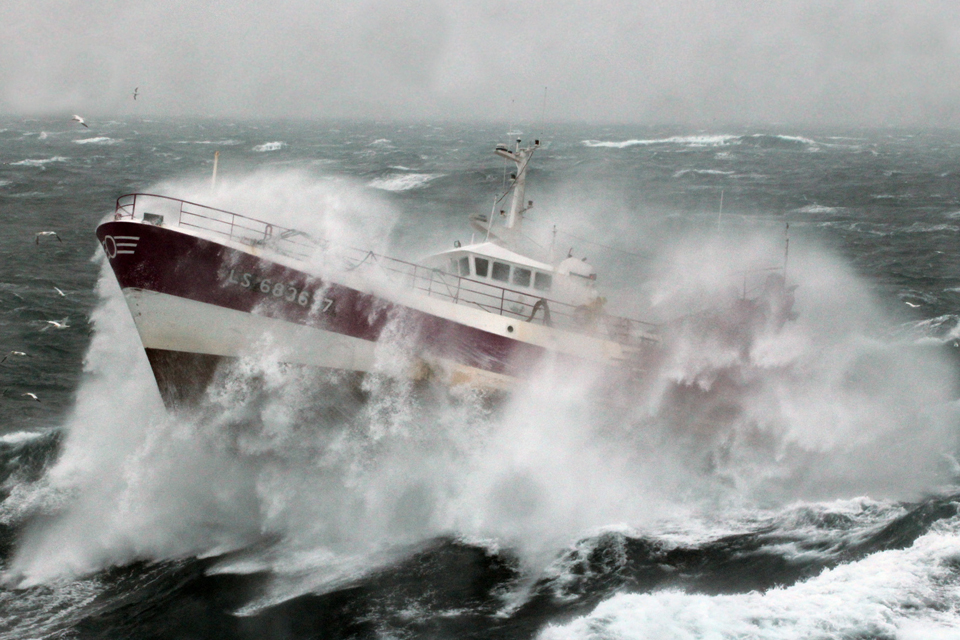 The French fishing vessel 'Alf' being tossed in the Irish Sea [Picture: Crown copyright]Meanwhile, Royal Navy Hydrographic survey vessel, HMS Echo, was carrying out maritime security operations when she received a request for assistance from Milford Haven Coastguard. She joined the RAF SAR crew and a local Royal National Lifeboat Institution (RNLI) lifeboat at the scene.
The crew of Echo attempted to use her 3,500-tonne bulk to provide some shelter for the RNLI lifeboat to get alongside the French fishing vessel, but once again the weather prevented a rescue.
This left the rescuers no choice but to escort the fishing vessel closer inland, where it would be easier for the helicopter to winch the injured fisherman to safety.
HMS Echo was fortunate to have gunnery officer Lieutenant Adam Butler on board. Lt Butler studied French at University College London before joining the Royal Navy and was able to translate what the French crew were saying.
Lt Butler said:

It’s not often that I get to use my language skills in my current job, but this was a refreshing change. I’m just pleased we were able to assist another mariner in his time of need.
​ 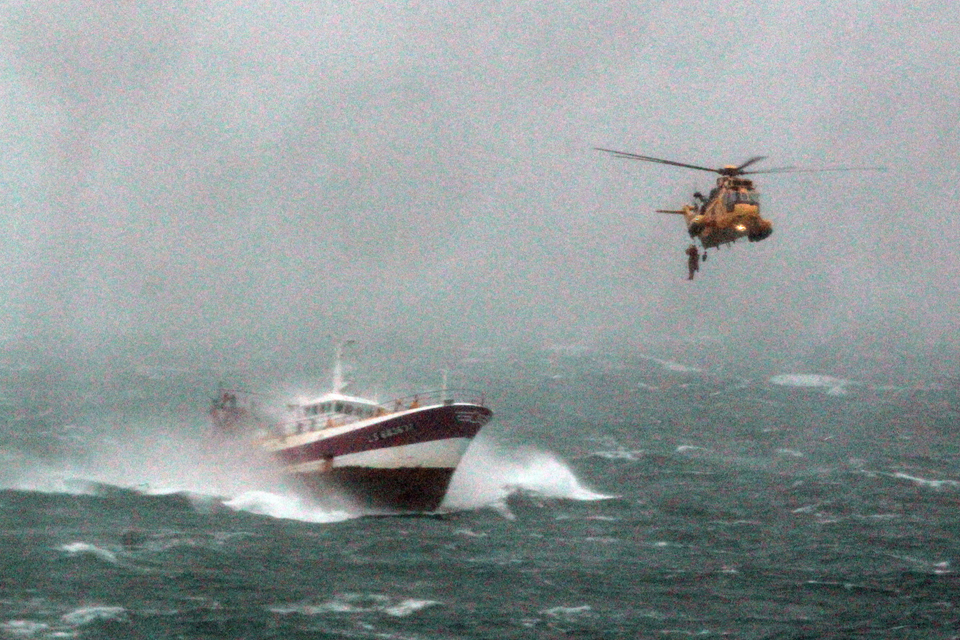 Winchwoman Sergeant Rachel Robinson during her final attempt to transfer to the deck of the French fishing vessel 'Alf' [Picture: Crown copyright 2013]Sgt Robinson was lowered twice more, but again, the pitching seas ripped her from the vessel.
However, her third attempt was successful and she managed to detach from the winch-wire and assess the casualty.
Seeing his deteriorating condition, Sgt Robinson decided to carry out a fast, single strop recovery.
Making use of the ‘Alf’s’ slightly more predictable roll and pitch rates, Flight Lieutenant ‘Taff’ Wilkins – the Sea King’s captain - climbed his helicopter as the ‘Alf’ reached the top of a swell and plucked Sgt Robinson and the casualty clear of the deck.
The casualty was treated en-route to land for head injuries and hypothermia and was taken to Swansea Morriston Hospital. Due to the actions of the crews of Rescue 169, HMS Echo and the RNLI, the injured crewman survived.

Super Moderator
Winchwoman Rachel Robinson! Didn't realise there were females in that role..good on her.