Ministry of Defence said:
The RAF Fire and Rescue Service is the deployable arm of the Defence Fire Risk Management Organisation and the firefighters are always among the first troops to deploy in support of air operations.
On the night of 14 September 2012 they were on duty at Camp Bastion, assisting with the loading of injured personnel onto a medical evacuation flight.
As enemy fighters breached the camp perimeter and attacked the airfield they moved the injured to safety and took up defensive positions around vital buildings such as Air Traffic Control.
Recalling the events of that night, Senior Aircraftman Dominic Garner said:

When the attack started we were a bit shocked and it took us a few moments to realise what was happening. As we reached the scene I could hear the incoming small arms fire and I saw a rocket-propelled grenade fly past, smashing into the blast wall 30 metres to our left.
​ 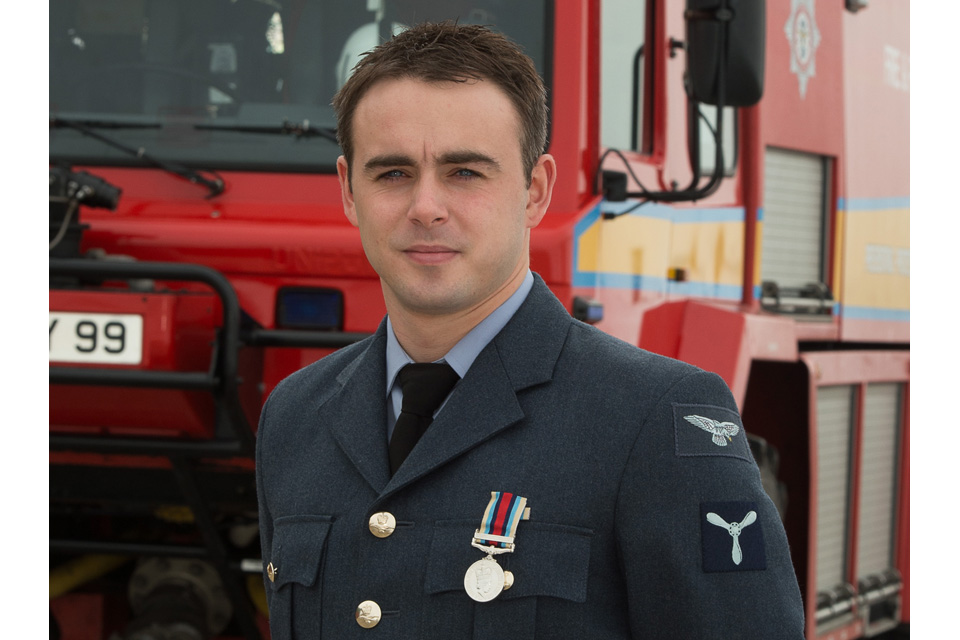 Senior Aircraftman Dominic Garner, from the Fire Section at RAF Brize Norton, proudly wears his Afghanistan Medal [Picture: Steve Lympany, Crown Copyright/MOD 2013]The high readiness incident response teams of the RAF Fire and Rescue Service are frequently required to conduct rescue activities in hostile areas and are often at threat from enemy fire or explosions.
Flight Sergeant Steve Hollis was the Force Fire Officer at Camp Bastion that day, ordering the crews to adopt a war-fighting posture to assist their force protection colleagues from the RAF Regiment. He said:

We routinely operate outside the wire so we have to be able to protect ourselves from enemy attack; it is unusual to have to do it inside the wire.
​
The firefighters received their medals during a reception held by the All-Party Parliamentary Group for the Armed Forces at the invitation of Madeleine Moon MP.
There are currently more than 90 RAF Fire and Rescue Service personnel deployed around the world, including on Operation Herrick in Afghanistan.
When not on operations they provide a quick reactive resilience force that safeguards the Defence Estate and can be called upon to assist local authorities with serious incidents.