The family of Sergeant (Sgt) Arthur Pulman (Royal Air Force), an ‘unknown airman’ who was killed during World War 2, have spoken of their great pride after his grave was formally recognised at a rededication service on 13 September 2016 at Rheinberg War Cemetery, Germany. 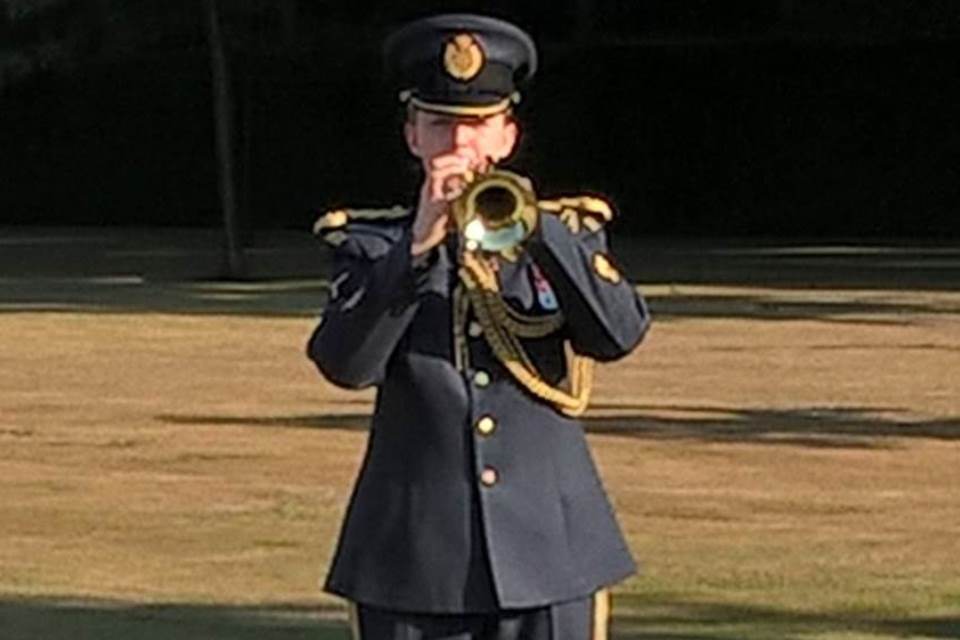 A bugler playing the Last Post during service for Sgt Pulman, Crown Copyright, All rights reserved 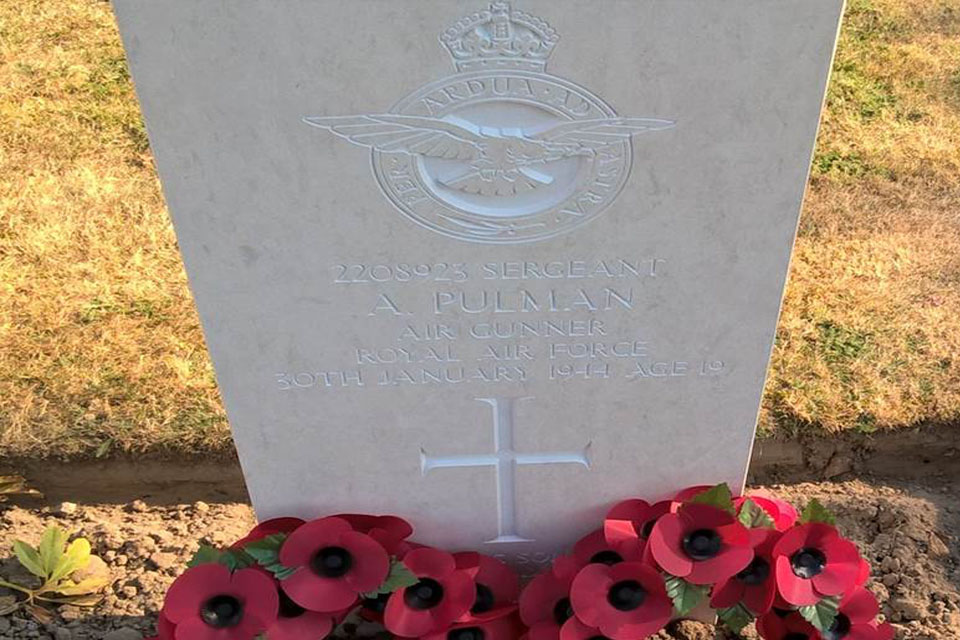 Sgt Pulman was just 18 years old when he was killed during a fierce night fighter attack on 30 January 1944. He was the tail gunner on board Lancaster Bomber EE173 and part of 207 Squadron Royal Air Force, when it was brought down. All of the other crew members successfully bailed out of the aircraft but were then taken as prisoners of war. 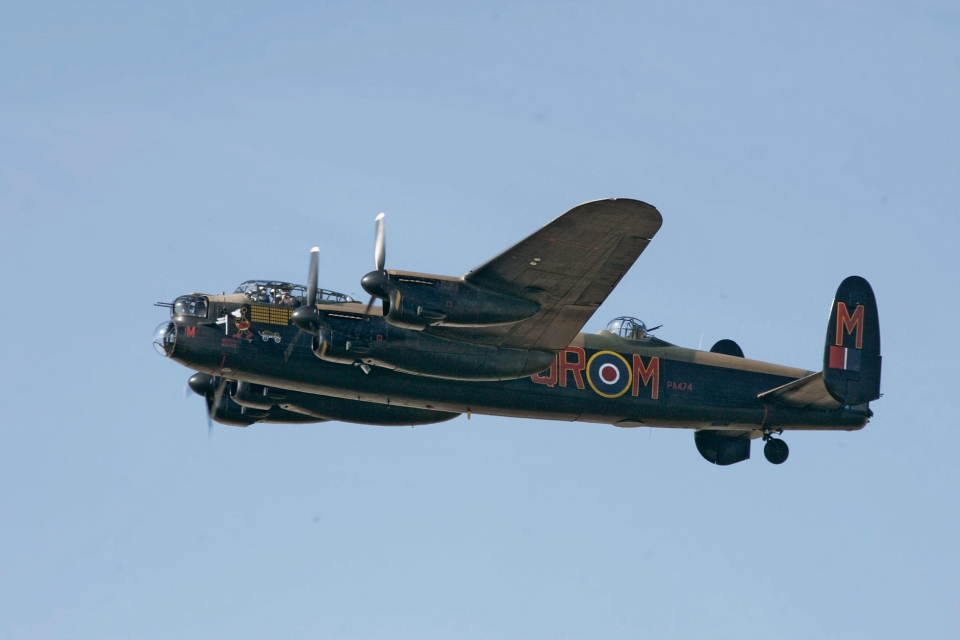 Born on 31 May 1924 in Liverpool, Sgt Pulman was the younger son of George and Evelyn Pulman. He joined the RAF on 5 February 1943 at 18 and lived in Dane Street, Walton.

In December 1970, an RAF Lancaster was salvaged from Lake Krumme in the American sector of Berlin. Its engine numbers matched those of Lancaster EE173. The evidence linking human remains found nearby and the aircraft were not considered strong enough at the time, and the remains buried in Rheinberg War Cemetery as those of an ‘unknown airman’. Evidence relating to the incident has now been examined, and with the help of the Air Historical Branch and research conducted by JCCC, it has been possible to identify the remains as those of Sgt Pulman.

Dorothy Tartt, niece of Sgt Arthur Pulman stated how overwhelmed her family were by the events although it was tinged with sadness that her brother, also named Arthur who had died earlier this year, was not alive to see the final resting place of their uncle commemorated.


The family is pleased that Arthur’s grave has been found and rededicated in such a peaceful cemetery.
​
Reverend (Wing Commander) Ashley Mitchell RAF said:


Today’s service reminds us of the great sacrifice that young airman made during World War 2. I’m honoured to be able to conduct this service and dedicate the grave to Sgt Arthur Pulman.
​ 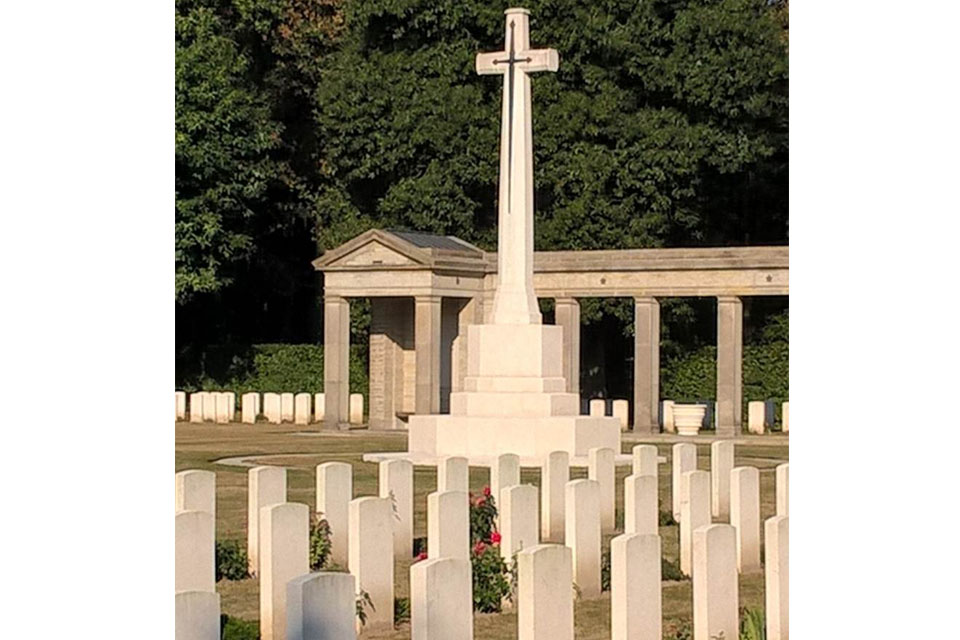 Family members of Sgt Pulman who were unable to travel had been involved throughout the preparation and sent a wreath which was laid by Louise Dorr, from the JCCC on their behalf. Louise said:


It has been an honour and privilege to work on this case, to meet the Pulman family and to rededicate Arthur’s grave.
​
A new headstone bearing Sgt Arthur Pulman’s name has been provided by The Commonwealth War Graves Commission (CWGC), who will now care for his final resting place in perpetuity.

Perhaps one day I'll receive a 'Thank you'.