The remains of 2 unknown British soldiers were given a dignified burial service earlier today (Thursday 15 March), over 100 years after their deaths. The service, organised by the MOD’s Joint Casualty and Compassionate Centre (JCCC), part of Defence Business Services, was conducted by The Reverend John Swanston CF, Chaplain to the 1st Battalion The Rifles. 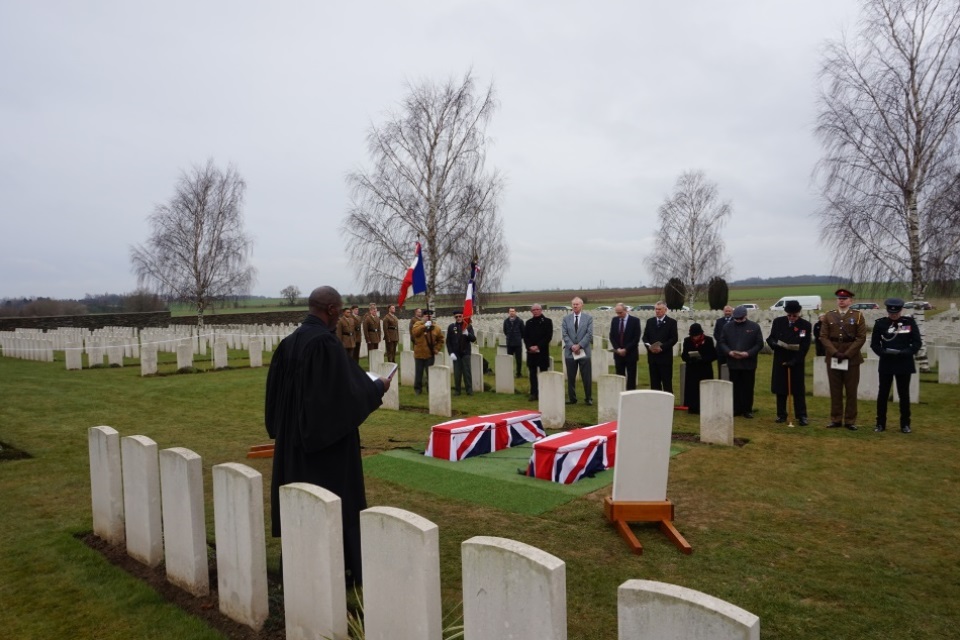 Both of these men were laid to rest today in a ceremonial burial with full military honours at the Commonwealth War Graves Commission (CWGC) Orchard Dump Cemetery in France. 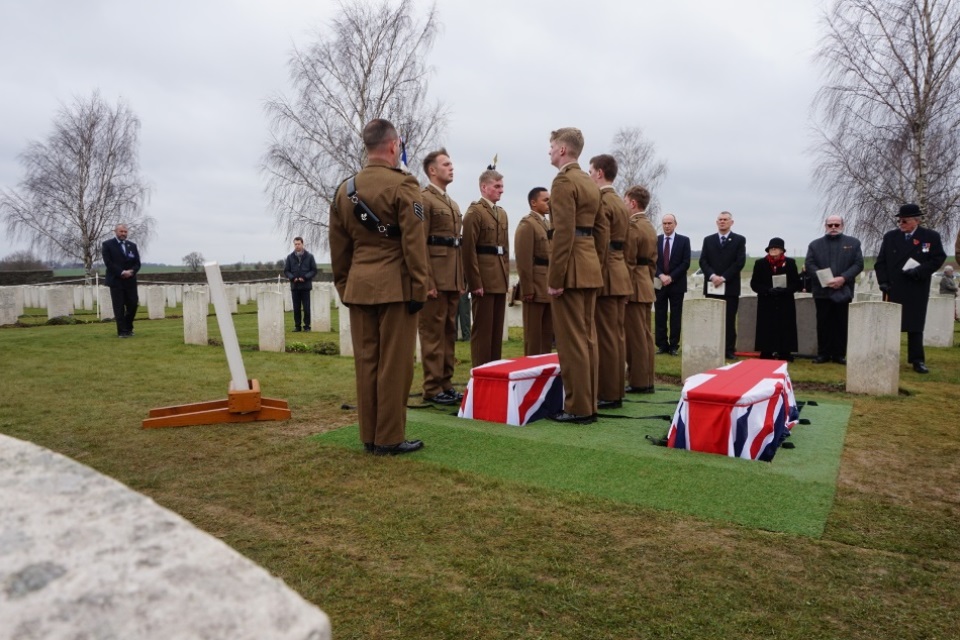 Members of the 3 Rifles Regiment standing by the coffin of the unknown Durham Light Infantry soldier, Crown Copyright, All rights reserved


It is always a source of great personal sadness when we have to accept that we have been unable to identify a soldier who made the greatest sacrifice and paid the ultimate price.
​
We might not know who they are, but they were loved by somebody. It is fitting that members of their military family from the Royal Anglian Regiment and The Rifles are here today to pay tribute and to see them laid to rest with honour and dignity.
​ 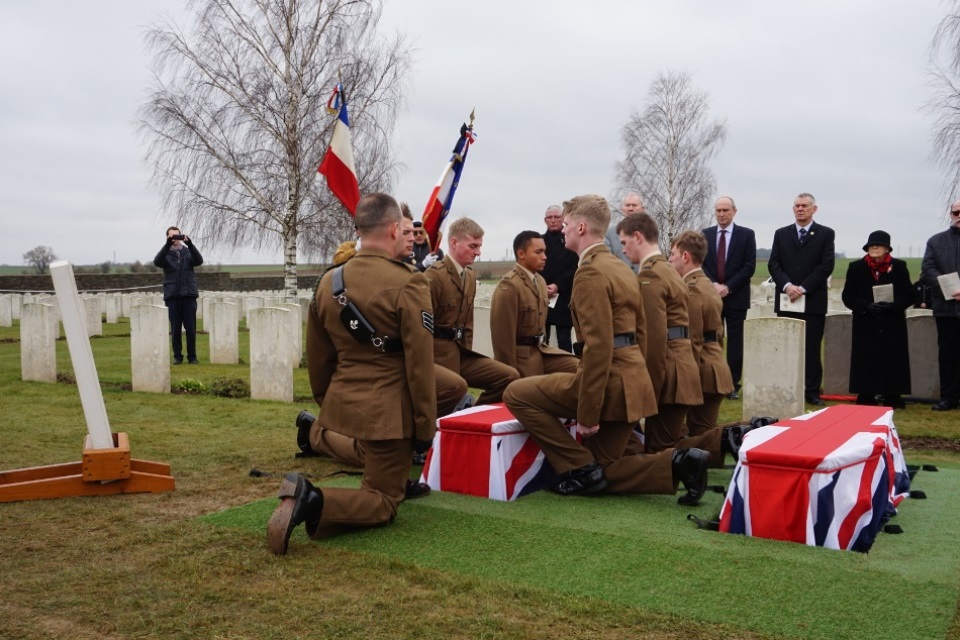 Members of the 3 Rifles Regiment prepare to lower the coffin of the unknown Durham Light Infantry soldier, Crown Copyright, All rights reserved

The 2 soldiers were both found at Gavrelle near Arras. The first was found in July 2016. Based on the artefacts also found at the time which included a Durham Light Infantry shoulder title and cap badge, plus a T7 (7th Battalion) badge, it was thought that he died in September 1918 from when only 2 soldiers from the 7th Battalion are still missing. DNA testing has proved that it is neither of these soldiers. 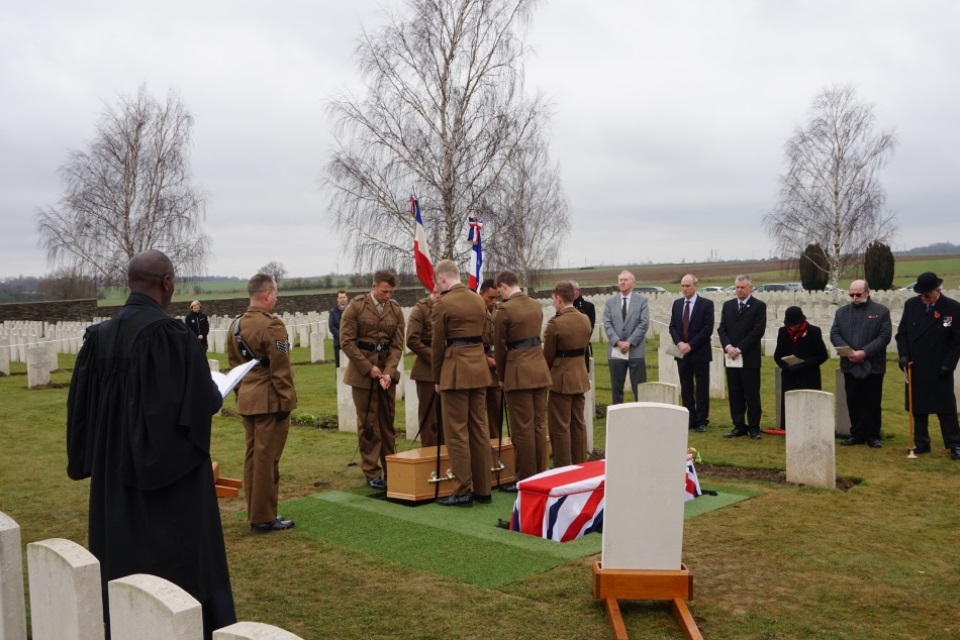 Members of the 3 Rifles Regiment lower the coffin of the unknown Durham Light Infantry soldier, Crown Copyright, All rights reserved

The second soldier was found in September 2016. In his uniform pocket was a Bedfordshire Regiment cap badge. It is thought that he died in the Battle of Gavrelle in April 1917, but there are still too many Bedfordshire soldiers missing from that time for an identification to be made. 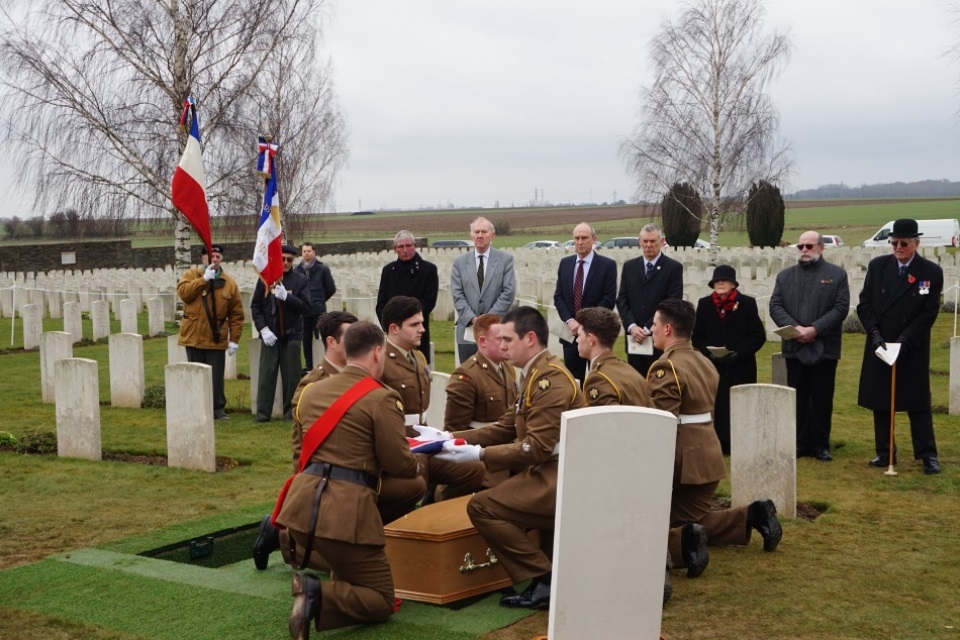 
It is a privilege as both a serving Rifleman and UK Defence Attaché to France to participate in this solemn ceremony, as we rebury with full honours these courageous men who paid the ultimate price whilst serving their country alongside their comrades in arms to protect the liberty of Europe 100 years ago.
​
Mel Donnelly, CWGC said:


Today these soldiers, unknown but not forgotten, will be laid to rest alongside their comrades at the Commonwealth War Graves Commission’s Orchard Dump Cemetery. They have been buried with the honour and dignity their sacrifice deserves and the CWGC will care for their grave, and the graves and memorials to all those who died, with that same honour and dignity forever. We will remember them all.
​
Captain Patrick Keating, Adjutant 3 Rifles, successor regiment to the Durham Light Infantry, said:


It is an immense honour for Riflemen of 3 RIFLES to be involved in the burial of this unknown soldier of the Durham Light, who faithfully served his country over 100 years ago. It is humbling to think of this sacrifice and the debt which the country owes him and we are proud that we in the RIFLES carry on the traditions of the Durham Light Infantry and our other antecedents to this day.
​
Headstones for the unknown soldiers have been provided by the CWGC, who will now care for their final resting place in perpetuity.