News story: Duke of Cambridge attends 70 year anniversary celebrations of the state of...

The state of North Rhine-Westphalia (NRW) was established on 23 August 1946 by the British Military Government following the end of the Second World War. For almost 70 years a large British military presence has remained in the region carrying out a crucial role during the Cold War and in the reconstruction of the area.

At its peak the British component based in Germany numbered almost 200,000 people. The strong links between NRW and Britain remain today, with approximately 27,000 British citizens living in the state, and 1,400 British firms basing their companies there, including BP and Vodafone. 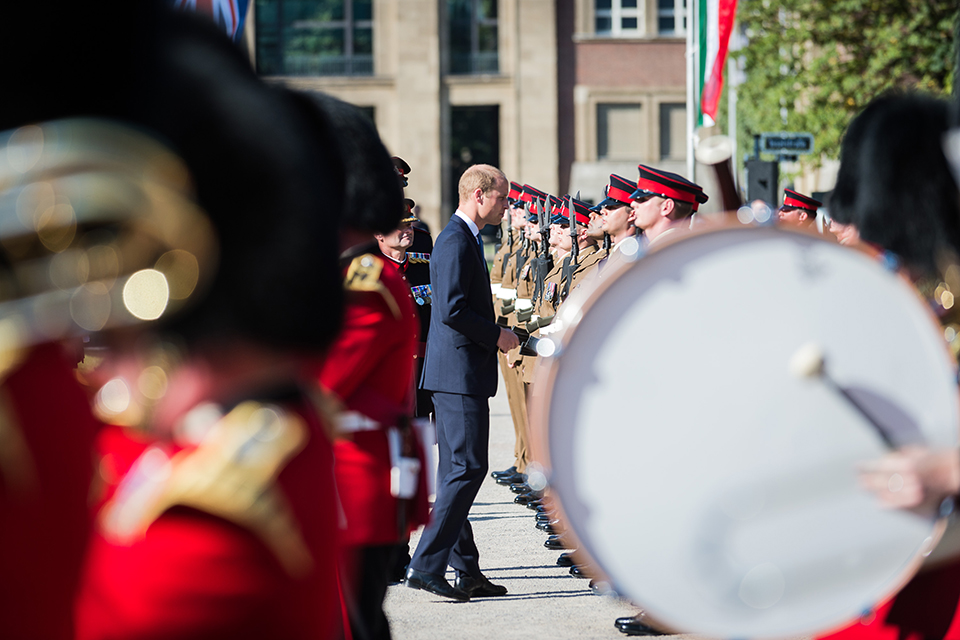 As part of the celebrations, Prince William attended a military parade involving British soldiers from 20 Armoured Infantry Brigade. During the parade NRW Minister President Hannelore Kraft awarded the Brigade the ‘Fahnenband‘, the federal state’s highest honour awarded to military units or organisations. The honour was presented in recognition of their service and contribution to the defence of Germany during the “Cold War”, and for the enduring friendship and the development of the close ties that now exist between the two countries.

In his speech in Dusseldorf, Prince William made reference to the close co-operation between Germany and Britain over the decades;


Britain’s historic connection with North Rhine-Westphalia has created a unique set of ties which retain their relevance and importance to the present day. You are Britain’s closest German economic partner; you are home to some 25,000 British people; many hundreds of thousands of your residents visit the UK every year and many tens of thousands of your students study at British universities. There is a thriving exchange of culture, science and sport between the UK and this dynamic and thriving Bundesland. In short, what began 70 years ago as a relationship of necessity between an occupying power and a region in ruin, is today a partnership of genuine friendship and of massive mutual benefit.
​
Following the parade a reception was held where Prince William met members of 20th Armoured Infantry Brigade and their families. In the evening, the Prince then attended a state 70th anniversary gala celebrating the history of the NRW state alongside Chancellor Angela Merkel and NRW Minister President Kraft.