Ministry of Defence said:
Exercise Pashtun Dawn has been taking place across the entire length of the Salisbury Plain Training Area (SPTA) and has involved some 9,000 troops and support personnel, over 550 tracked and wheeled armoured vehicles, and both fixed and rotary wing aircraft.
Currently the largest single exercise that the British Army conducts, Pashtun Dawn draws to a close on 3 March after almost 3 weeks. It is the final exercise for soldiers from 1st Mechanized Brigade prior to them deploying to Afghanistan at Easter and is the culmination of 18 months’ training.
DIO is responsible for managing and maintaining MOD’s estate. This includes SPTA, where the organisation delivers military training facilities that support and prepare troops for operations worldwide.
Lieutenant Colonel Mark Hiskett, Commander SPTA, said:

Preparing the soldier for operations around the world is at the heart of everything we do here at Salisbury Plain. The size and nature of the plain means that it offers excellent training facilities, ideal conditions, and the perfect backdrop for large-scale exercises like Pashtun Dawn.
​ 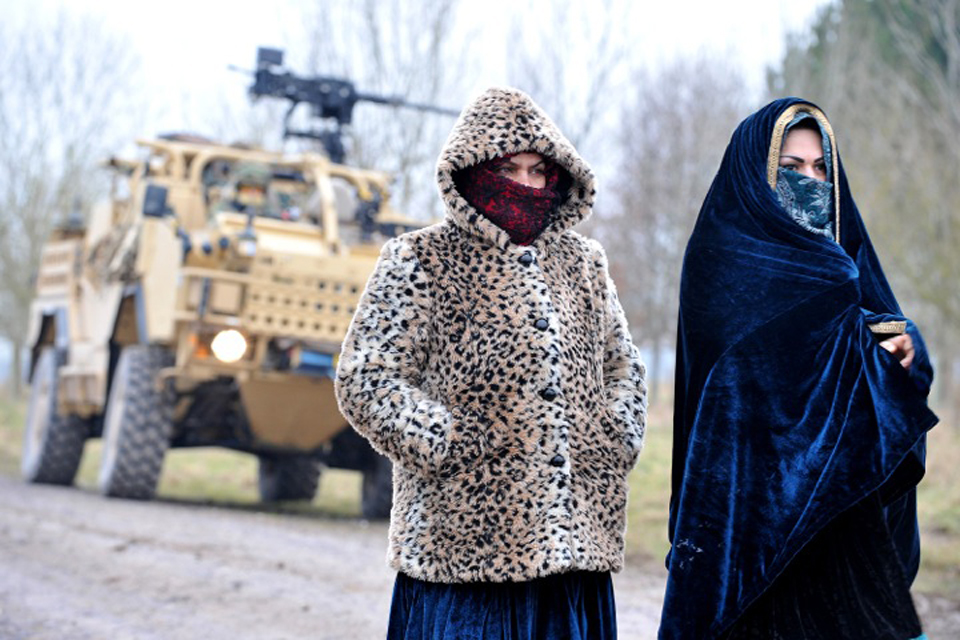 Actors playing the part of Afghan nationals during Exercise Pashtun Dawn [Picture: Crown copyright]At over 94,000 acres (38,000 hectares) Salisbury Plain is the UK’s largest training area and offers first-class and diverse training facilities to enable the British Army to meet its training requirements to prepare for operations worldwide.
Salisbury Plain is the only training area in the UK large enough to support this exercise. The area is able to cope with 2 fully-established transition support units - equivalent to a large battalion.
Many temporary forward operating bases and numerous civilian compounds have been built to add realism and the exercise has been supported by over 700 contemporary operating environment forces including Afghan nationals, acting as the civilian population, and a mix of European and retired Gurkhas acting as members of the Afghan Police and Army.
The exercise has been delivered by the Field Training Unit based in Westdown Camp and has involved support troops from 12th Mechanized Brigade, 4 Logistic Support Regiment, 1st Battalion The Royal Anglian Regiment, 6 Close Support Battalion Royal Electrical and Mechanical Engineers, 11 Signal Brigade and 1 Signal Brigade.
Lieutenant Colonel Rupert Whitelegge, Commander Field Training Unit, said:

This is the Army’s largest exercise, the culmination of training for those deploying to Afghanistan, and their opportunity to practise working with all of the military and civilian assets they will work with on operations.
​
This includes 240 foreign soldiers and 650 civilians acting as Afghans. The exercise continues to prove invaluable in preparing the Army for its current main effort - Op Herrick.
​