Defence Infrastructure Organisation (DIO) has worked with partners Landmarc Support Services (Landmarc), the Army, the New Zealand High Commission and local volunteers to restore a kiwi carved into the chalk on Beacon Hill, above the town of Bulford in Wiltshire. Affectionately known as the ‘Bulford Kiwi’, it was created in 1919 by soldiers from New Zealand at the end of World War I as they awaited their return home.

The figure has recently become a scheduled monument, which means it is recognised as a nationally important archaeological site and it is now protected from destruction or change. The monument has been looked after by the New Zealand High Commission and various local groups and companies over the years.

As part of a conservation project to ensure the historic significance of the kiwi is preserved, 100 tonnes of chalk were dropped from an RAF Chinook helicopter and raked into place by volunteers from the 3rd (UK) Division Signal Regiment, Operation Nightingale – a project established jointly by the DIO and The Rifles, which sees ill and injured service personnel and veterans assisting archaeologists with excavations on the defence estate – Landmarc, the New Zealand High Commission and local conservation groups.


I have thoroughly enjoyed meeting and working with so many willing volunteers today. The links between the UK and New Zealand are still strong and it has been touching to see so many people involved in looking after and protecting the kiwi for generations to come.

It has been great to be involved in helping to protect and restore such a significant monument.
​
The kiwi stretches to 130 metres (420 feet) high across Beacon Hill and is a much loved monument locally, nationally and internationally. 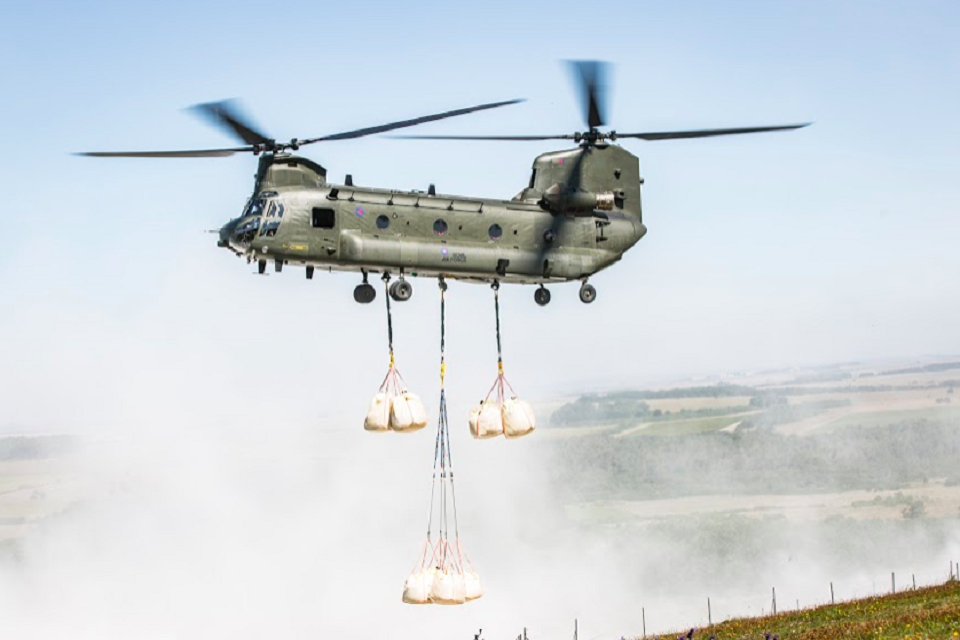 A Chinook delivers bags of chalk to re-chalk the kiwi for the first time in 30 years. Crown Copyright.


Britain and New Zealand have deep and longstanding ties and it’s important that we play our part in preserving valuable monuments like these for future generations.

The MOD is responsible for conservation of our land, allowing it to offer much needed habitats for a variety of flora and fauna to thrive, and for public enjoyment.

While we need to make sure our military training facilities prepare the armed forces for operations worldwide, we must never forget that conservation is extremely important.
​
The work is not just an act of conservation but recycling as well. The chalk has been made available because of the excavations on Salisbury Plain to build new housing and infrastructure under the Army Basing Programme. The conservation project has been undertaken by DIO, which plays a vital role in protecting and maintaining monuments across the MOD estate.


Thank you to everyone who has worked together to get the kiwi looking its best again. It has been a truly collaborative effort and we are also grateful for the involvement and support of the High Commissioner of New Zealand.

It has been a brilliant project to be involved in and is a perfect example of the work that DIO does to protect and maintain the many historic sites across the estate.
​
Continue reading...
You must log in or register to reply here.