This £25 million retail and leisure scheme, in the heart of Catterick, was developed and built by Kier on surplus land sold by the Defence Infrastructure Organisation.

Her Royal Highness was shown round the the 150,000 sq ft development, which was built on the former MOD central sports ground. The impressive project includes a 7 screen cinema operated by Empire, a 60 bed Premier Inn and restaurants by Hungry Horse and Brewers Fayre, in addition to retail units occupied by Next, Boots, Sports Direct, KFC and Iceland. 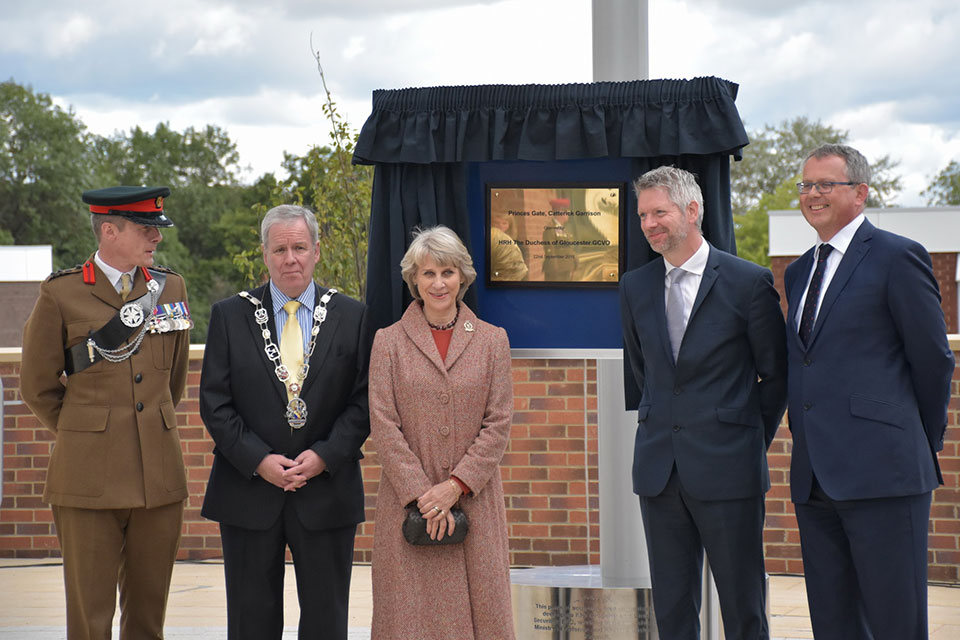 The development has directly created around 700 new jobs, with additional jobs in local service companies and supply chains.


The Princes Gate development will enhance the quality of life of Catterick’s Service personnel and their families, in line with DIO’s role of supporting our armed forces to live, work, train and deploy. It will enhance the cohesion of the garrison community.


This is a great example of DIO working collaboratively with its key stakeholders and industry to deliver improved facilities and realise savings for defence and the taxpayer by disposing of under used estates.


DIO worked closely with Kier, Lingfield and the local authorities to ensure the development contributed to the economic growth of the region, both by attracting visitors and creating employment opportunities.
​
After identifying the need for a modern town centre at the garrison the DIO sold the surplus site to Lingfield (Catterick) Ltd, a joint venture set up by Lingfield Securities and Kier Property Developments, and construction started in April 2014.

Public consultations and exhibitions were held about the plans, and the development partnership worked with Richmondshire District Council to make sure the development complemented, rather than competed with, the shops and facilities in nearby Richmond. Hence the majority of stores in Princes Gate are large units which could not be accommodated in Richmond.

MOD still has surplus sites on Richmond Road and Shute Road, so the new complex could be just the first phase in Catterick’s expansion.

Kier Property is continuing to deliver many sole and joint venture scheme in the retail, industrial, commercial and leisure arena, with a pipeline in excess of £1.5 billion.


Kier Property became involved with Princes Gate in 2013 as a joint venture partner, before becoming sole developer for the scheme in July 2015.


Even though the economic climate was set against us we secured many high profile brands to this site, many of whom are here today to help us celebrate its success and we’re delighted Her Royal Highness was here to officially open it.


Princes Gate will bring a welcome improvement to the community life of the garrison and surrounding area.
​
Niall Garner, Head of People Change for Whitbread Restaurants, said:


We’re so thrilled with the visit from Her Royal Highness to highlight the development at Catterick. Across Premier Inn and Brewers Fayre, we’ve created 65 roles for local people.


We’ve also created some great partnerships in the local community, particularly with the Army Resettlement Centre, who worked closely with us through our recruitment and training activities; the Army Career Transition Partnership and Job Centre Plus, and look forward to welcoming everyone to Brewers Fayre in the future.
​
HRH the Duchess of Gloucester is Colonel-in-Chief of the Royal Army Dental Corps, Deputy Colonel-in-Chief of the Adjutant General’s Corps and Royal Colonel of the 7th (V) Battalion, the Rifles.

The Duchess was chaperoned on her visit to the development by Brigadier Gerald Strickland, Commander 4 Infantry Brigade, and Nigel Turner, Kier Group Executive Director, and was introduced to key members of the development team, DIO and its consultants involved in delivering Catterick’s new town centre.

The official opening was celebrated by more than 100 occupiers, developers, DIO members and councillors, as well as members of the public.