Michael Fallon has praised the contribution of UK personnel during a visit to the biggest NATO exercise in more than a decade.

Mr Fallon met UK personnel on board the helicopter carrier HMS Ocean today (Thursday), who are part of a 3,000-strong contribution to Exercise Trident Juncture off Portugal.

He was accompanied by NATO Secretary General Jens Stoltenberg during his visit to Ocean, which is the UK’s largest warship and flagship for the exercise. They were given briefings by officers, and met with the Maritime Component Commander for the exercise, Rear Admiral Tony Radakin.

Earlier Mr Fallon and Mr Stoltenberg witnessed an amphibious display including Royal Marines on a shore site at Troia, which was attended by Portuguese President Aníbal Cavaco Silva. 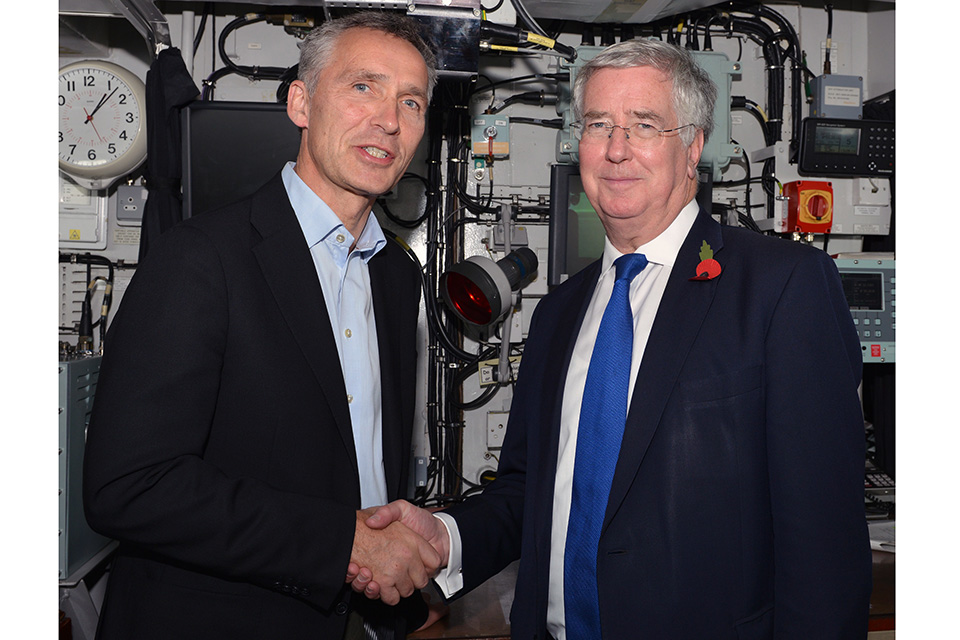 The exercise has brought together personnel from the Royal Navy, British Army and Royal Air Force in co-operation with allied forces from 30 nations over the five-week span of the operation.

In all 36,000 people will participate, working from 230 military units, 140 aircraft and more than 60 ships. They are in place over the two-part exercise to test the NATO Response Force (NRF), with specific focus on how it responds to a crisis situation and responds to threats from any direction.

The exercise also tested functions of the Very High Readiness Joint Task Force – or Spearhead Force – ahead of it becoming fully operational next year.

The UK has also contributed an Army Brigade Headquarters and Battlegroup, three Royal Navy warships and aircraft, including Typhoon fighter jets and helicopters.


We live in a darker and more dangerous world, which means it is vital that we work with our NATO allies to ensure our collective forces are primed and ready.

The UK is at the heart of Trident Juncture. By committing around 3,000 troops, our two biggest warships and our Typhoon fighter jets, we are sending a clear message to our enemies that we are ready to respond to any threat, and defend our allies.

This is an exercise, but it’s not a game.
​
Rear Admiral Tony Radakin said:


During Trident Juncture I’ve had the privilege of commanding some 60 ships, submarines and aircraft as part of the largest and most ambitious NATO exercise in more than a decade.

The scale and scope of this exercise involving forces on land, in the air and at sea is providing excellent training as I prepare to take Command of the Maritime NATO High Readiness Force next year, further reinforcing the UK’s commitment to the alliance.
​
Continue reading...
You must log in or register to reply here.