During the two day visit, the Defence Secretary met with the Minister Responsible for Defence Affairs, His Excellency Sayyid Badar bin Saud bin Harub Al Busaidi, signing a Memorandum of Understanding and Services Agreement in Muscat. The agreement secures UK use of facilities at Duqm, ahead of the completion of the UK Joint Logistics Support Base at the port, giving Britain a strategically important and permanent maritime base east of Suez, but outside of the Gulf.

The booming Duqm Port complex provides significant opportunity to the defence, security and prosperity agendas for both the UK and Oman. It has dry dock capability able to accommodate submarines and the UK’s flagship, HMS Queen Elizabeth, which is the largest and most powerful warship ever built for the Royal Navy.

From Duqm, HMS Queen Elizabeth will be able to project influence across an important region. She will fulfil multiple roles from providing air power anywhere at any time, to supporting allies or delivering humanitarian aid and the port itself provides Britain with a hub from which to tackle issues such as the fight against Daesh.


This agreement ensures British engineering expertise will be involved in developing Duqm as a strategic port for the Middle East, benefiting the Royal Navy and others.

Oman is a longstanding British ally and we work closely across diplomatic, economic and security matters. Our commitment to the Duqm port project highlights the strength of our relationship.
​
Through ensuring a permanent UK presence at Duqm, the UK will be able to shape the development of the Naval facility to support its carrier capability and wider British security needs in the region. Alongside at Duqm was HMS Monmouth, who has recently completed a five month deployment to the Gulf where as part of an international coalition she was involved in drugs busts worth £400m. The Defence Secretary praised the work of the sailors whose actions removed a key funding stream for terrorists in the region. 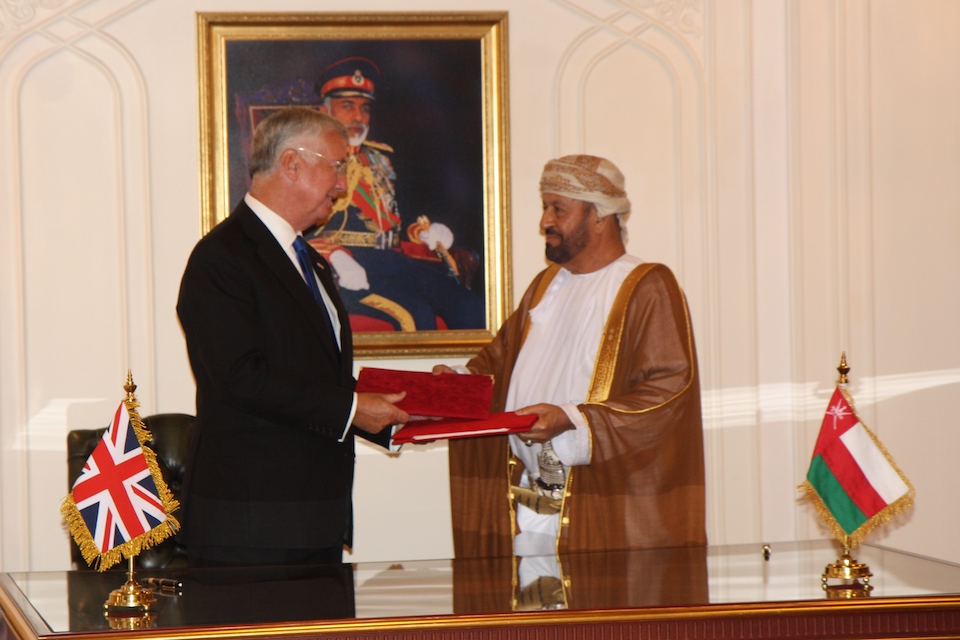 Once completed, the UK Joint Logistics Support Base, a multi-million pound joint venture between British defence company Babcock International and the Oman Drydock Company, will provide the UK a permanent training facility in addition to a key military logistics centre in the Gulf. It will also be connected to other Gulf countries by the Gulf Rail Project.

The UK and Oman are established allies in the Gulf, with a wide range of shared interests. With a particularly strong defence relationship, the infrastructure built at Duqm port will support Exercise SAIF SAREEA 3 in 2018, the largest UK-Oman joint exercise for 15 years.