At the Ministry of Defence in London today they discussed Britain’s bilateral relationship and explored ways the UK can work together with Croatia on joint activities.

The Defence agreement focuses on developing the UK-Croatian Defence relationship including focus on: existing joint operations to support stability, peace and security; effective deployments together on future international operations; and further opportunities and benefits for defence procurement and equipment support.

By signing the agreement the Defence Secretary has also confirmed the UK will hold annual Defence talks with Croatia, which will be held at policy director level.

This year Croatia is contributing to the NATO high readiness force which the UK is leading, by providing a platoon of Military Police and a Civil Military Co-operation Team. Croatia will also contribute to the German Enhanced Forward Presence in Lithuania.

Croatia has around 100 troops deployed on operations in Afghanistan, where 500 UK personnel are based in Kabul to provide officer training and wider assistance and advice.


Croatia is a good partner of the UK with our Armed Forces’ serving together within NATO in Afghanistan and in Europe. The UK will continue to play a leading role in NATO and I welcome Croatia’s commitment to the high-readiness force that we are heading this year.
​ 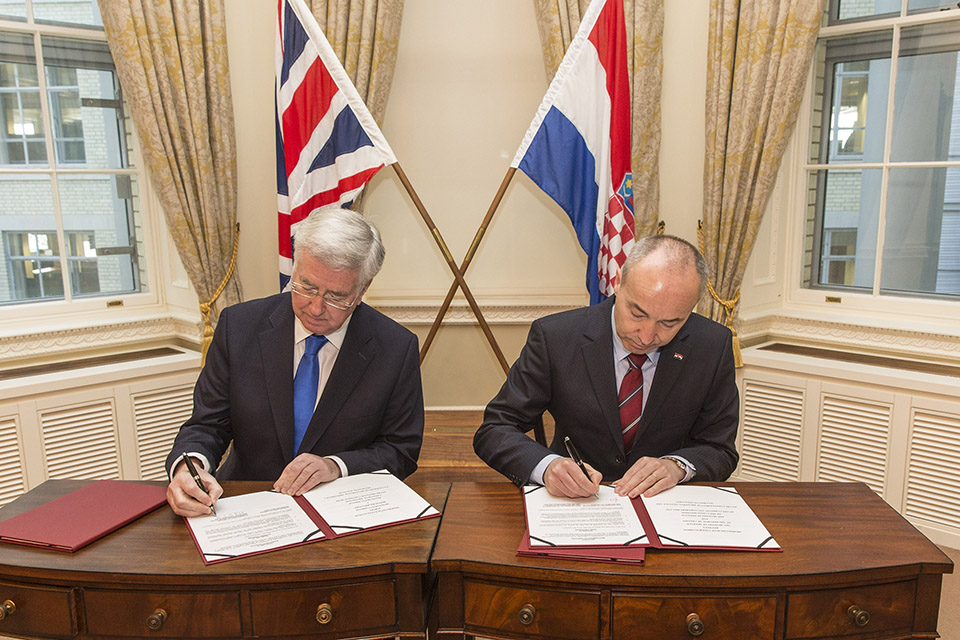 During their meeting the ministers also discussed the Defence Secretary’s meeting with Croatian President Kolinda Grabar-Kitarovic in October and HMS Defender’s visit to the port of Split last June.

The UK enjoys good relations with several states in southern and south eastern Europe. In September the Defence Secretary visited Bulgaria and Albania as part of his regional engagement, and last month met UK personnel providing training to the Armed Forces in Ukraine.