Defence Secretary Gavin Williamson paid a visit today to Rubb in Gateshead, global-leaders in innovative defence structures and hangars for the military sector, where he outlined the benefits of defence to local jobs and industry.

The Defence Secretary met with staff and toured the facility during his visit of the company, which has been a long-standing supplier to the UK Armed Forces, going back to 1979 when the RAF tasked them to supply military buildings for the world-famous Red Arrows.


A strong defence industry throughout the four corners of the UK is crucial to our economy as well as our national security, and Rubb UK are an outstanding example of our world-leading homegrown engineers in the North East.

Their workers are part of some 700 jobs we support in this area, and their pride in making the homes for our world-class jets and aircraft is clear to see.

With this region benefitting from £100m of defence investment and in line for more business, it is playing a key role in ensuring our Armed Forces have what they need to protect our country from intensifying threats.
​ 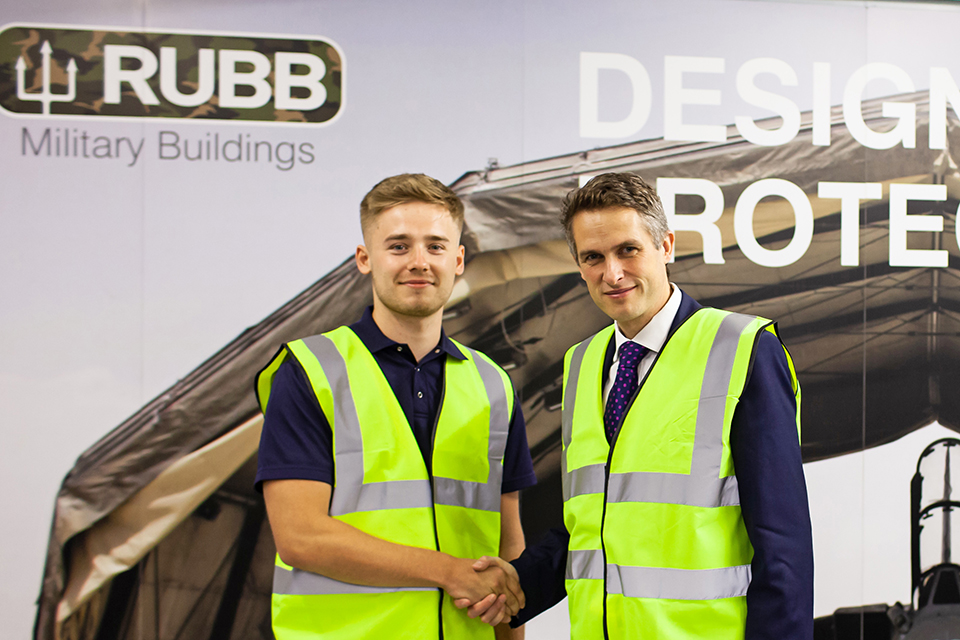 The hangars have been invaluable to British, Canadian and US forces deployed on operations across the globe. Rubb continue to provide the Armed Forces with long-term assets and are exploring the potential of their cutting-edge cooling techniques and structural fabric technology for the UK’s new Lightning jets.

Rubb are an exemplary British business who design and manufacture their military buildings in the local area, securing jobs and investment into the region and delivers the UK with a much-valued domestic industrial capability. Rubb also export their products across the globe to consumers in Africa, Europe, North America and the Middle East.

The company has over 50 local employees and currently benefits from a £6.86 million contract with the MOD. A significant local employer, Rubb’s first ever apprentice in 1977 has now risen to become Steel Production Manager after more than forty years of service.


Working with the MOD is a long-standing relationship that we have nurtured over the years. We are proud to be part of an industry that helps provide equipment, which supports our troops at home and in the field. It is encouraging to learn that the North East is being recognised for its engineering knowledge and skills, and for Rubb to be recognised as an ‘outstanding’ example in this field by the Defence Secretary. We hope to see future investment in this industry so R&D and jobs can continue to grow.
​
As outlined in former Defence Minister Philip Dunne’s report on the contribution defence makes to British prosperity, the North East plays an important role in UK defence, providing over 3,000 regulars and reserves to the Armed Forces, supporting over 700 industry jobs, and is renowned for its defence manufacturing industry.

The region benefits from MOD investment in local industry and commerce totalling £100 million, where The largest MOD industry group expenditure in the area is with computer services totalling £63 million. Key suppliers include DXC Technology, Capita and Pearson Engineering.