While visiting the Aircraft Carrier Alliance, in Rosyth, Mr Fallon met with the project team to discuss the build progress of the second carrier, HMS Prince of Wales.

HMS Queen Elizabeth, which was formally named by Her Majesty the Queen in July this year, is currently being fitted out in Rosyth dockyard before arriving in Portsmouth.


I came here to see for myself that the project is on track and on time to give Britain carrier strike capability, with HMS Queen Elizabeth operating with new F-35 planes by 2020.

These carriers will spearhead Britain’s sea power for the next 50 years, keeping the nation safe at home and protecting our interests abroad.

These magnificent ships are testament to the skill of the British shipbuilding industry and have created jobs not only in Rosyth and Scotland but across the UK. Our investment demonstrates the Government’s commitment that UK warships are only built in UK shipyards.
​
Work on the QEC carriers has created or sustained around 8,000 highly skilled jobs.

In Scotland alone, the QEC work has helped to directly support some 4,000 jobs and hundreds of apprentices at the Rosyth and Clyde shipyards. 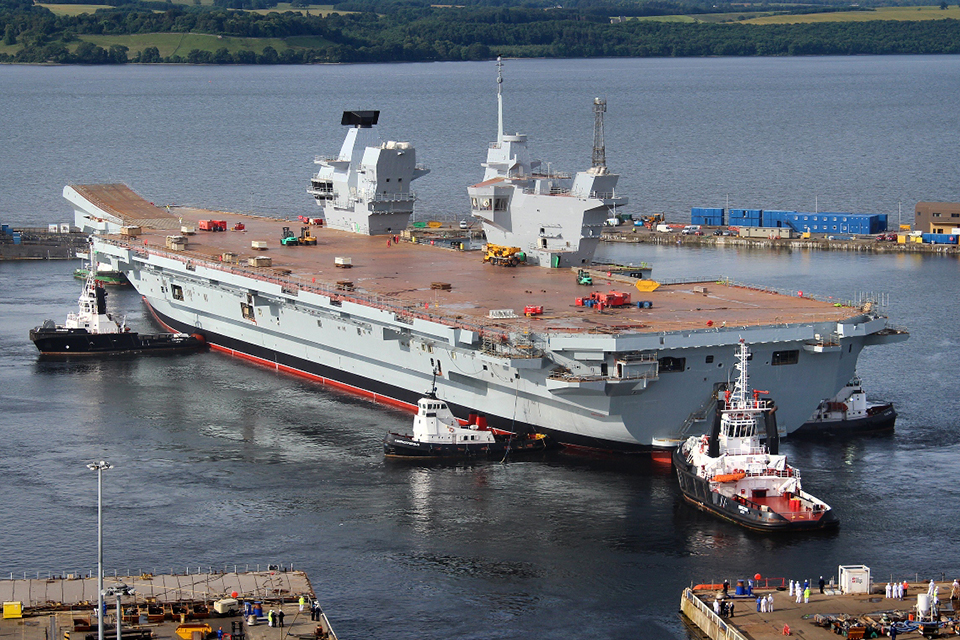 With the MOD having invested some £2.66 billion in the programme at these shipyards so far – it is clear that Defence is making an unequivocal and continuing commitment to Scottish industry.


We’re incredibly proud to be delivering the nation’s flagships and delighted to have the opportunity to show the Defence Secretary the progress we’re making on both ships following the naming ceremony in July.

HMS Queen Elizabeth has now reached an important engineering milestone which allows us to bring all her systems to life and HMS Prince of Wales, which only started assembly in September here in Rosyth, is now more than 40% complete.
​
HMS Queen Elizabeth will be handed over to the Royal Navy in 2017 and are expected to enter service by 2020.

With an expected service life of up to 50 years, the QEC carriers will be highly versatile and powerful joint Defence assets, able to meet the widest range of tasks around the world.

They are the largest, most capable and effective surface warships ever constructed in the UK.

The Defence Secretary also reiterated that there has been no change in the delivery programme for the F-35B strike aircraft which will fly from the carriers.

The phased approach to ordering F35 is working, with the first batch on track to enter initial maritime operating capability alongside HMS Queen Elizabeth in December 2020 as planned.