Addressing engineering students, academics, and apprentices, Sir Michael Fallon announced three members of the new Defence Innovation Advisory Panel. The Panel will be charged with driving forward the MOD’s Innovation Initiative, which aims to encourage imagination, ingenuity and entrepreneurship, in pursuit of maintaining a military advantage in the future.


Backed by an £800M innovation fund, we want to transform defence and work with small firms, academics and others to find solutions to the threats to our security.

This panel of world class innovators will bring their drive and expert insights to the vital task of keeping the UK ahead of our adversaries and boosting our prosperity.
​
Major Tim Peake, the first British astronaut at the European Space Agency, is one of the panel members to be announced. Businessman and former Chairman of McLaren Technology Group Ron Dennis, Innovate UK’s Chief Executive Ruth Mckernan, and Robert Hannigan, retiring GCHQ Director, all join him.


I’m delighted to be part of the Ministry of Defence’s drive to place innovation at the heart of everything they do, and to bring my experience to the effort to improve the technology, organisation, and culture that keep the UK safe.
​
Ron Dennis said:


There can be nothing more important than our national security, and I’m enthusiastic to be among the first of those named to this world-class Panel, who have joined MOD to spearhead their efforts to innovate across the organisation, from technology to culture – challenging the status quo, staying ahead of the curve through change and innovation.
​
Innovative Unmanned Technology


During his speech, the Defence Secretary also announced the launch of a two year £8 million second phase of innovative research and development, exploring the future of unmanned air systems. Developed in partnership with Leonardo Helicopters, the Rotary Wing Unmanned Air Systems (RWUAS) Capability Concept Demonstrator will be a vital tool in discovering how unmanned air systems can support our personnel on the battlefield of the future by developing new concepts and technologies.

The jointly funded programme will utilise the specialist engineering skill base at Leonardo Helicopters by exploring emerging technologies and methods. The announcement comes after the Royal Navy led ‘Unmanned Warrior’ in 2016: a major international demonstration of autonomous systems which could transform the way in which the Armed Forces of the future help keep Britain safe.

SMEs at the heart of innovation


SMEs are at the heart of the Innovation Initiative, and earlier on Monday, the Defence Secretary visited two world-leading Oxfordshire-based small and medium enterprises. The Defence Secretary took part in an Innovation Roundtable with industry representatives, academics, think tanks, and senior policy-makers. The goal is to work more effectively with businesses and academics across the UK – and particularly with SMEs which might not normally think of themselves as Defence suppliers.

Sir Michael Fallon discussed the innovative collaboration between Reaction Engines, the MOD, and suppliers while touring the cutting-edge facility. The company is a global leader in aerospace propulsion and is currently designing and developing technologies for the next generation of air and space vehicles, with the potential to enable hypersonic flight and transform space access.

He also toured the Animal Dynamics facility, viewing their Skeeter intelligence-gathering micro-drone, which has tiny wings inspired by the dragonfly. Animal Dynamics’ innovative research is focused on so-called “biomimetic technology”: producing drones based on natural forms. The MOD has placed contracts with Animal Dynamics worth up to £1.5M since June 2015 as part of its Disruptive Capabilities initiative. The drone is part of a wider, innovative MOD Disruptive Capability project, which aims to significantly improve intelligence gathering in complex urban environments. 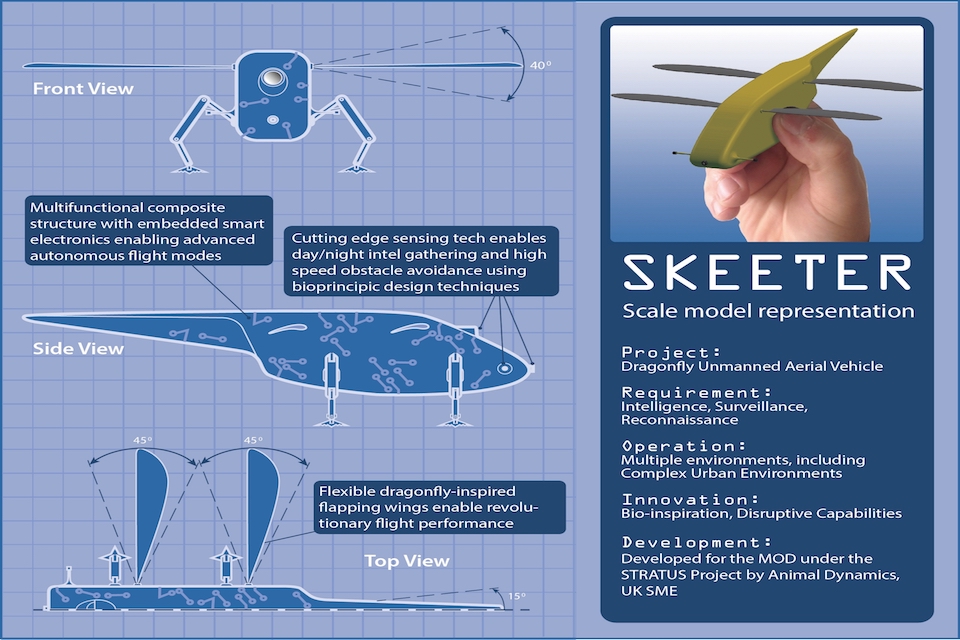 The Defence Secretary also visited the new Centre for Applied Superconductivity: a joint project between University of Oxford and local industrial partners and research centres that share an interest in the discovery and future applications of novel superconducting materials. These include improved MRI healthcare scanners and in new quantum technologies for sensors and meteorology. This direct engagement between the research community and commercial application is precisely the kind of dialogue the Innovation Initiative seeks to foster.


As part of Defence’s drive to transform its culture, the role of the MOD’s Chief Scientific Advisor has been expanded and is responsible for the MOD’s commitment to spend 1.2% of its budget on science and technology. While in Oxford, the Defence Secretary announced that world-renowned scientist Professor Hugh Durrant-Whyte has been appointed to lead the MOD’s research and technology programme. As the MOD’s Chief Scientific Advisor, Professor Durrant-Whyte will work across the UK and internationally to drive defence innovation, commission research, and use technology to keep our people safe in challenging environments.