Speaking at BAE Systems’ shipyard in Barrow-in-Furness Cumbria, the home of British submarine construction, he announced £960 million worth of contracts have been signed to ramp up the next phase of construction for the UK’s four nuclear-armed Dreadnought submarines.

He also announced that the Ministry of Defence has signed a £1.5 billion contract to build a seventh Astute hunter-killer submarine for the Royal Navy, before revealing that the attack boat will be called Agincourt. It will be the sixth vessel in the Royal Navy to be named after the Battle of Agincourt of 1415.


This multi-billion-pound investment in our nuclear submarines shows our unwavering commitment to keeping the UK safe and secure from intensifying threats. Agincourt will complete the Royal Navy’s seven-strong fleet of hunter-killer attack subs, the most powerful to ever enter British service, whilst our nuclear deterrent is the ultimate defence against the most extreme dangers we could possibly face.

Not only is this a massive boost for our armed forces, but it’s huge for Barrow, the heart of sub-building in this country. Today’s news supports 8,000 BAE Systems’ submarine jobs, as well as thousands more in the supply chain, protecting prosperity and providing opportunity right across the country.
​ 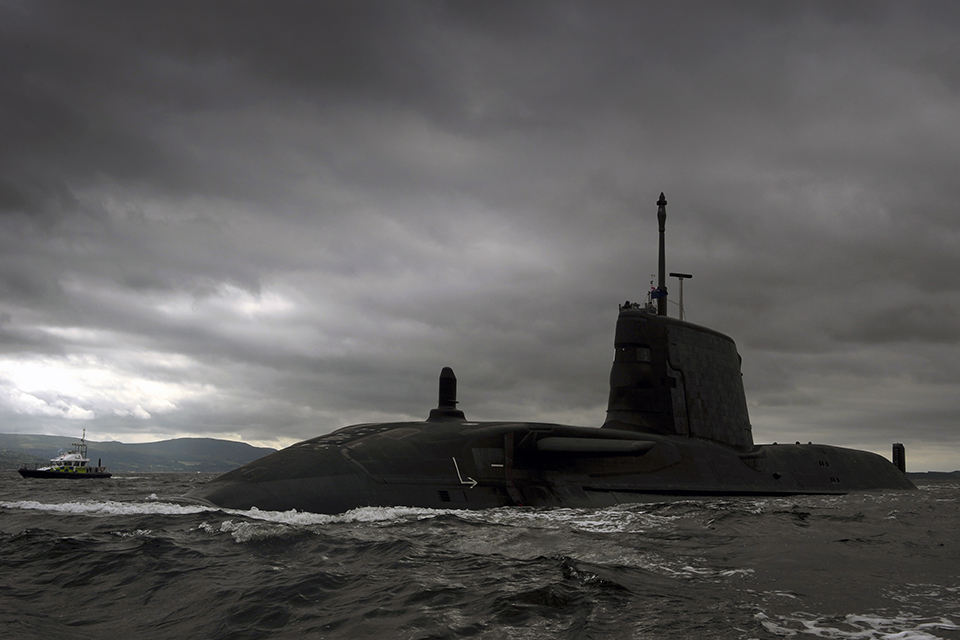 The multi-billion pound announcements will help sustain around 8,000 jobs in BAE Systems’ submarine business, as well as thousands more across the UK submarine supply chain.

The Defence Secretary made the announcements during a ceremony, in which also opened a new £100 million submarine construction building in the Cumbria factory. In front of a gathered workforce of employees and apprentices, he unveiled a plaque to mark the opening of the state-of-the-art Central Yard Facility building which, at 26,700 metres squared, is equivalent in size to 21 Olympic-sized swimming pools and, at 45 metres high, is as tall as ten double-decker buses.

It will be used to outfit and test each section of the new Dreadnought submarines. The Dreadnought Submarine Programme will now move into its second phase. This will continue the design and build of the first Dreadnought submarine and commence the build of the second, including furthering the design and manufacture of the nuclear propulsion power plant. This phase has commenced with contracts signed for £900 million and £60 million with BAE Systems and Rolls-Royce respectively.

Elsewhere, Defence Minister Guto Bebb will be in Derby today – with the Rolls-Royce contract seeing over 700 jobs sustained at their factory in the city.


The Dreadnought Programme is a true national endeavour, furthering our world-class nuclear capability. Today’s announcement includes a £60m contract for Rolls-Royce, supporting over 700 jobs here in Derby as the factory continues to make the reactors that will power our state-of-the-art Dreadnought subs into the 2060s. I’d like to thank everyone at Rolls-Royce in Derby for their contribution to maintaining our Continuous at Sea Deterrent, protecting us against the most serious threats to our way of life, every hour of every day.
​
The Submarine Delivery Agency, which was established last month, will project manage the construction of future Royal Navy submarines, and support those in-service, working with Navy Command and the newly established Defence Nuclear Organisation.


The incredibly complex Astute and Dreadnought programmes maximise the tremendously skilled and experienced workforce we have across the UK submarine business.

Both programmes require commitment and close collaboration with our industrial partners across the supply chain and in the newly formed Dreadnought Alliance, which will deliver a step change in how we will work together to efficiently and effectively deliver nuclear submarines for the Royal Navy.
​
Cliff Robson, BAE Systems Submarines Managing Director, said:


Securing this latest funding for our submarines programmes is excellent news for BAE Systems and the 8,700 employees in our Submarines business, as well as our local community in Barrow and the thousands of people across our UK supply chain who help deliver these nationally important programmes for the Royal Navy.

We continue to make progress on these highly complex and technical programmes and today’s announcements will allow us to move forward with greater certainty and stability.
​
Steve Dearden, President-Submarines for Rolls-Royce said:


The Dreadnought class programme is a vital, national endeavour and we are immensely proud of the role that we play as custodian of the naval nuclear propulsion capability in the UK. Dreadnought will be powered by the next generation Naval Pressurised Water Reactor technology, which will be simpler, require 30% less maintenance and have reduced in-service costs. Today’s delivery phase II announcement allows us to move from design through to manufacture and the delivery of major components that are essential for the submarine build timeline.
​
Continue reading...
You must log in or register to reply here.