During Michael Fallon’s first foreign visit of 2016, he said that he would like to further develop the UK’s defence cooperation with Japan and will pursue the possibility of a joint exercise involving RAF Typhoon aircraft visiting Japan in 2016 following their deployment on a Five Powers Defence Arrangement Exercise. This follows a visit by an RAF A400M to Miho Airbase in Tottori Prefecture in October 2015.


Japan is our closest security partner in Asia and I want to significantly deepen defence cooperation between our two nations.

We will do that through joint exercises, reciprocal access to our military bases, military personnel exchanges and cooperation on equipment, including a new air-to-air missile.
​
Further additional cooperation could include mine hunting in the Gulf; cooperating to improve amphibious capability; and improving counter-IED (Improvised Explosive Device) capability. The UK also welcomed increasing Japanese participation in NATO exchanges and joint exercises. 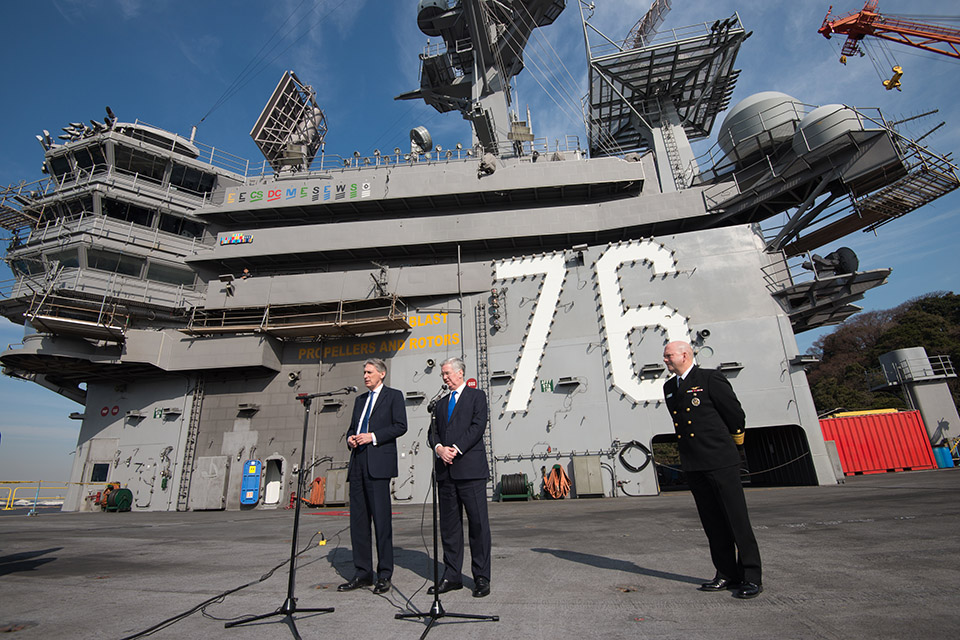 On the visit to Japan with Foreign Secretary Philip Hammond the Ministers met with their counterparts Minister of Defence H.E. Mr. Gen Nakatani and Minister for Foreign Affairs of Japan, H.E. Mr. Fumio Kishida. They welcomed progress in defence and security co-operation over the past year and reaffirmed the dynamic strategic partnership between Japan and the UK.

The Ministers confirmed that Japan and the UK would cooperate to tackle global security challenges, including through disaster relief and a greater role in UN peacekeeping. Recognising Japan as its closest security partner in Asia, the UK welcomed Japan’s recent Legislation for Peace and Security, and supported Japan playing a more proactive role in securing global peace, stability and prosperity through its policy of “Proactive Contribution to Peace” based on the principle of international cooperation.

Recognising the shared challenge posed by malicious cyber activity, the Ministers also decided to strengthen information-sharing and cooperation in cyber security. It was also confirmed that the two nations intend to conduct a joint research project in 2016 with UK-US-Japan military cyber analysts and are aiming to conduct joint cyber exercises with Japan.

It was also agreed to deepen cooperation on defence equipment and technology. Following the success of the first round of talks on the Co-operative Research Project on the Feasibility of a Joint New Air-to-Air Missile (JNAAM), the Ministers confirmed discussions would move to the second stage.