Sir Michael attended today the first meeting as part of the 2015 Defence and International Security Partnership (DISP), with his Indian counterpart Arun Jaitley.

The pair discussed UK-Indian defence industries, upcoming exercises and global security among other topics. The Defence counterparts jointly set out their ambitions to design, make, exercise, transform, train and co-operate together. They reaffirmed their intent for a stronger, deeper, wider relationship that delivers growth and jobs in the UK and India, improves regional security and supports both nations’ interests globally.


As Britain steps up globally, we continue to develop our close security partnership with India. Our countries are recognised globally as leaders in defence and we remain steadfast in our commitment to regional security, growing our defence industries and supporting our mutual interests.

Our nations face the same threats and we will work closely together to harness British expertise and Indian brain power to develop cutting edge technologies and equipment that benefit both of our Armed Forces.
​
The Defence Secretary visited Mumbai and Delhi over three days. During the visit Sir Michael laid a wreath at the Taj Mahal Palace Hotel in Mumbai to commemorate the 2008 terror attacks, visited an Indian Naval ship, delivered speeches at two think tank events and laid a wreath at Delhi’s India Gate to honour Indians who fought and died in the First World War. 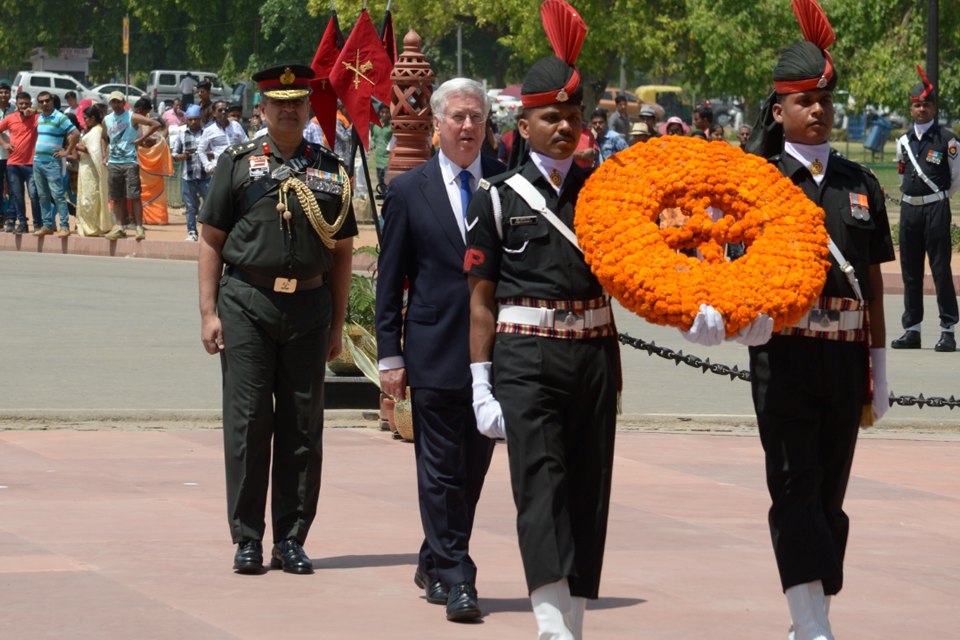 Defence Secretary Sir Michael Fallon laid a wreath at India Gate to honour the 74,000 Indians who served and died in the Second World War. Crown Copyright.

Today’s meeting between the Defence Ministers marked the inaugural annual UK-India Strategic Defence Dialogue, as laid out in the DISP. The DISP agreed to Capability Partnerships to help collaborate with Indian industry under the Make in India agenda and Defence Minister Harriett Baldwin addressed the Make in India Conference in February this year.

Over the past decade, the UK has exported £2.15 billion of defence equipment and services to India. From learning from each other on joint aircraft carrier journeys, to collaboration on defence science and technology projects, the UK and India are elevating their partnership, bringing greater opportunities for their respective defence industries and Armed Forces.