The Minister visited some of the aircraft and met with personnel stationed at the base. RNAS Culdrose is the heart of the naval air fleet, where naval aviators train. The base is an important part of the programme, which will deliver the two Queen Elizabeth Class (QEC) aircraft carriers, the largest warships ever built in the UK and from which the UK’s new F-35B Lightning II jets will fly.

After visiting the Merlin training facility, the Defence Minister saw the Dummy Flight Deck, designed to train QEC aircraft handlers among others, where she witnessed live training exercises. The skilled aircrew and engineers at the base specialise in anti-submarine warfare and Airborne Surveillance and Control.


It was an honour to visit one of Europe’s largest helicopter bases and meet the men and women behind its success. The state-of-the art facilities are helping to test and safeguard our maritime aircraft capacity.

The base provides 3,000 civilian and military jobs and is one of the biggest single-site employers in Cornwall, pumping £100m into the local economy every year, bringing welcome regional investment.
​
Many of the Merlins based at Culdrose will be fitted with the Crowsnest system, as announced recently in a £269 million deal. The system will act as the eyes and ears for the Royal Navy’s ships, providing long range air, maritime and land detection and tracking capability. Crowsnest is an important step in the ambitious carrier programme, which will be vital to protect the new vessels. 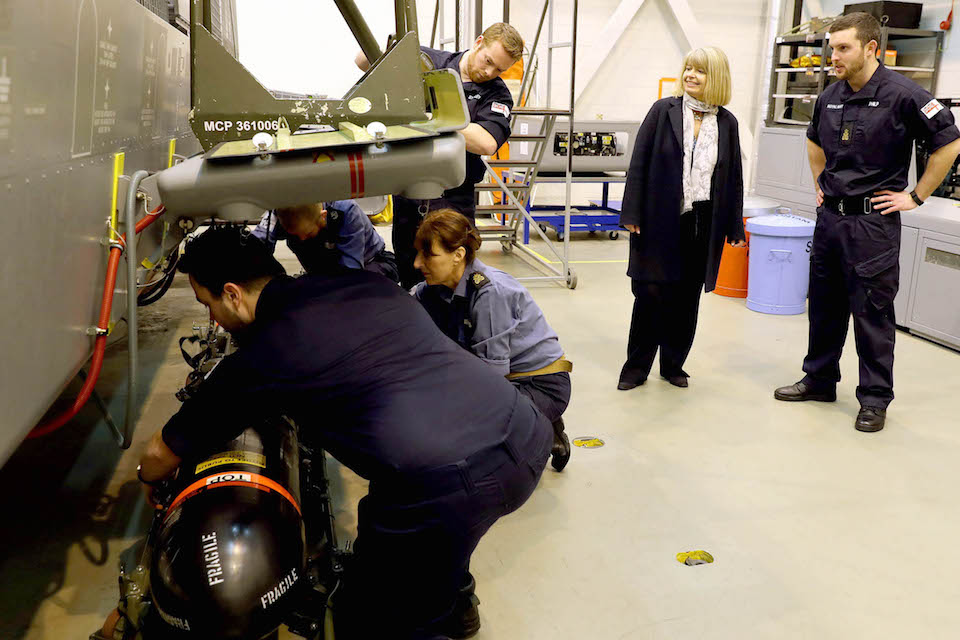 
It was a privilege to welcome the Defence Minister to Culdrose this week, and to discuss the vital role its people continue to play in the defence of our nation. She visits at a very important time for us; whilst we continue to deliver our primary roles of protecting the Nuclear Deterrent and supporting Counter Terrorism, we are also getting ready to defend the Royal Navy’s Carrier Task Groups.

HMS Queen Elizabeth, the Nation’s new flagship, will sail into Portsmouth Harbour this year and Naval Air Power will be at the forefront of this nation’s deployed capabilities. It is essential that we at RNAS Culdrose are ready to play our important role in this exciting new venture. Indeed, aircraft from 820 Naval Air Squadron, will be the very first to land on the flight deck of the new carrier.
​
The Minister also visited A&P Group and World Fuels at Falmouth docks. A&P support and maintain the Royal Fleet Auxiliary’s four Bay Class ships, one of which is currently stationed in The Gulf. Last year the ships conducted operations in the Caribbean and Mediterranean.


I am delighted to be in Falmouth, which has a vital ship repair capability, sustaining jobs and part of a UK-wide carrier effort.
​
Continue reading...
You must log in or register to reply here.