Defence leaders, including the Chief of Defence Staff Sir Nick Houghton, Deputy Chief of Defence Staff Lieutenant General Gordon Messenger and Defence Minister Earl Howe, explained how military airstrikes against Daesh are conducted, the targeting process and the steps taken to minimise collateral and civilian damage in Syria and Iraq.

Michael Fallon acknowledged how unsettled some members of the British Muslim communities have become about OpShader – the name of the military operation countering Daesh – and the need for better communication about these efforts.

This meeting coincides with the ‘Supporting Syria & the Region’ conference. This event takes place on Thursday February 4th and brings together world leaders from around the globe to discuss a united response to the crisis.


Today’s meeting was a chance to explain why we’ve extended the air campaign against Daesh from Iraq to Syria, as our enemies will do everything in their power to portray our intervention as a clash of civilisations.

This categorically isn’t a war against Muslims, or about picking a side between Sunni and Shia, or about targeting innocents. We are part of a coalition made up of many Muslim countries. And we fight to defeat a terrorist group who have killed more Muslims than any others, and who hate everything we stand for.
​
There were over 30 representatives at the meeting, including organisations such as St Philip’s Interfaith Centre, the Federation of Muslim Organisations, Association of Muslim Schools, Faith Matters and British Future. 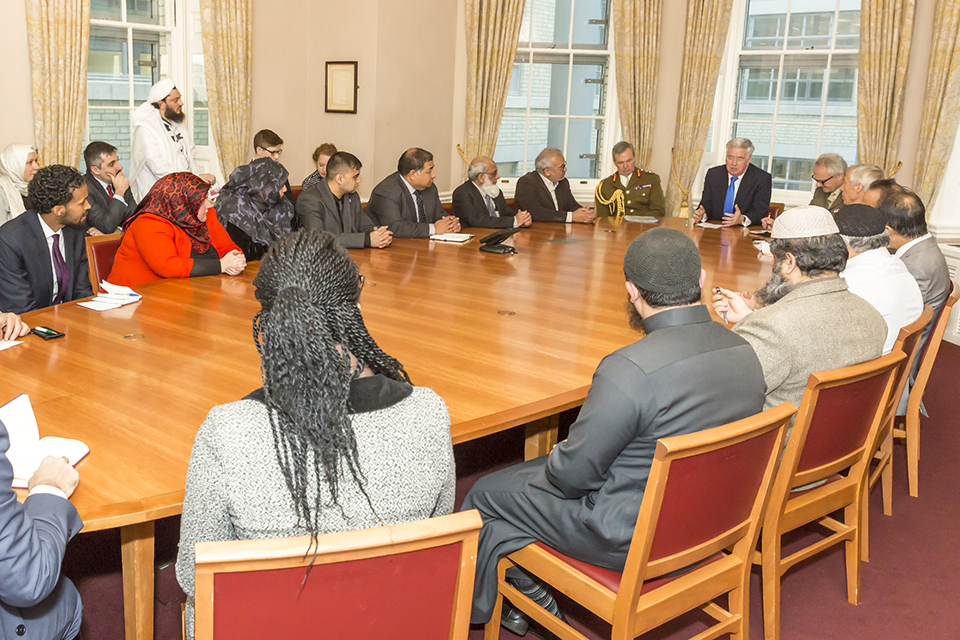 Dr Husna Ahmad OBE, the CEO of Global One – the UK’s only Muslim women-led international development NGO – attended the meeting:


It’s really good that the Ministry of Defence is taking the lead on engaging, understanding and listening to Muslim communities. Often we get our information from the media, so it’s not always reliable. Meetings like these allow us to hear the information directly from the military themselves.
​ 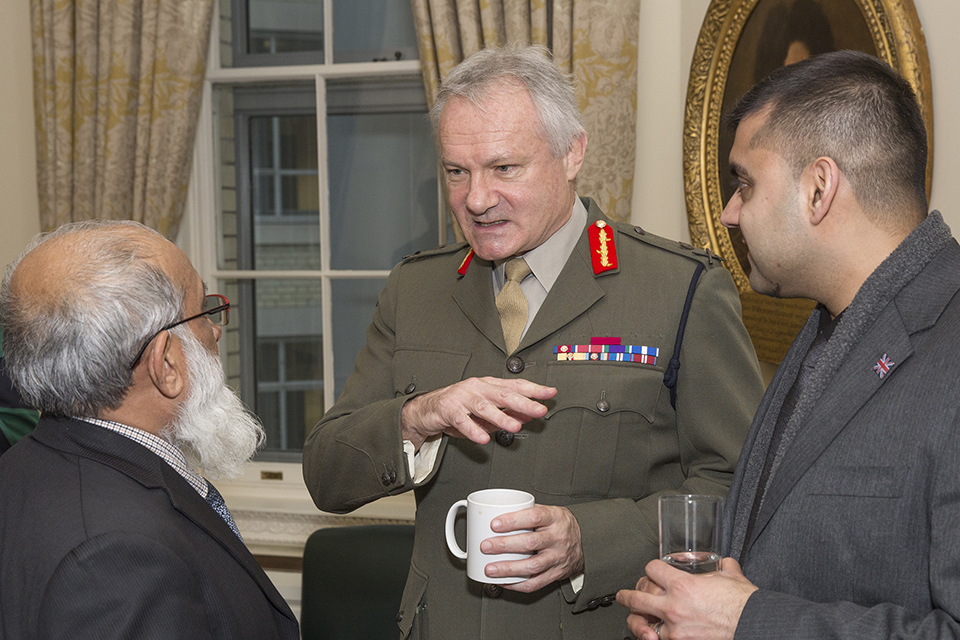 Daesh poses a direct and growing threat to our country; and we need to tackle this threat wherever it arises. The UK is playing a leading role in the Global Coalition’s military campaign with around 1000 UK personnel supporting OpShader in the wider region. The Coalition itself includes Iraq, Arab, European nations and the US. In total, Coalition forces have now damaged or destroyed over 16,000 targets and helped the Iraqi and Kurdish security forces retake 30% of the territory initially seized by Daesh in summer 2014. The towns freed in Iraq are Ramadi, Rabiyah, Zumar and Sinjar and in Syria, Kobani and Tal Abyd.

In Syria, RAF Tornado, Typhoon and Reaper aircarft have conducted 26 strikes, using Hellfire, Paveway and Brimstone precision weapons to strike a range of targets, including the Omar oilfield – one of the most important to Daesh’s financial operations. In Iraq, these aircraft have carried out 534 successful strikes.

These RAF aircraft continue to provide effective air support to Iraqi and Kurdish forces fighting Daesh on the ground, with recent significant successes at Ramadi and Sinjar. The aircraft provide niche and highly advanced intelligence and surveillance for coalition efforts in both Iraq and Syria.

In the Iraq cities of Besmaya, Erbil and Taji, UK personnel are training Iraqi and Kurdish Security Forces in infantry skills, how to counter explosive devices, weapons maintenance and combat medical techniques. This training is already saving lives and contributing to recent successful operations in Sinjar.