Ministry of Defence said:
Exercise Green Serpent, held over 2 weeks at Chivenor in North Devon, has tested the ability of the Commando Forward Surgical Group to deal with multiple battlefield casualties quickly, and safely, just as they would be expected to do when the Green Berets are sent into action.
Actors and trainee Royal Navy medics from HMS Raleigh, all made-up with realistic wounds and fake blood, served as the casualties for the surgical group - comprising around 80 personnel from the Commando Logistic Regiment, bolstered by surgeons, anaesthetists, nurses and specialist medical staff drawn from all 3 Services working at hospitals across the UK. 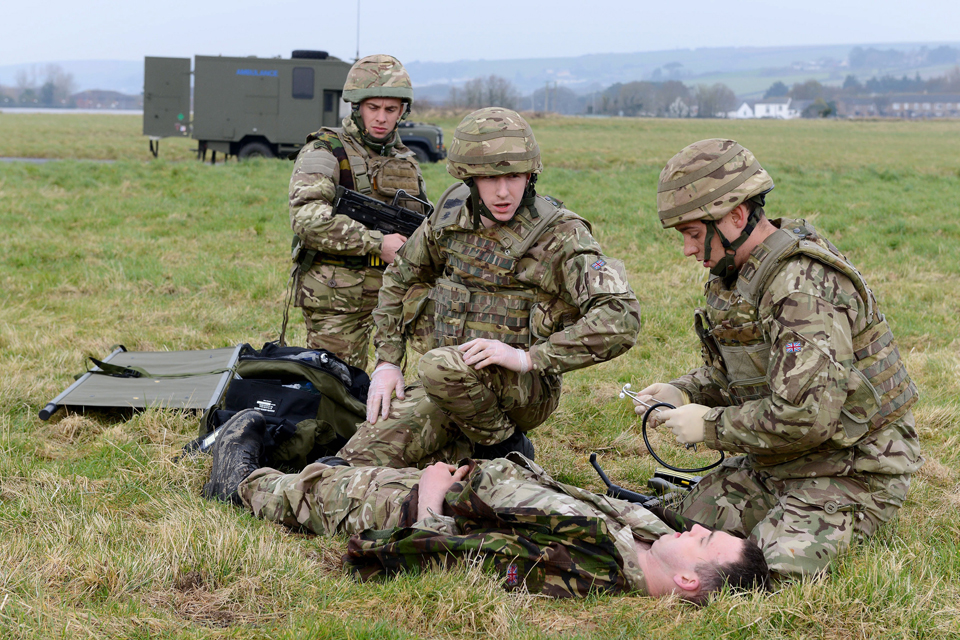 Commandos providing first aid to an actor simulating a battlefield casualty during Exercise Green Serpent [Picture: Leading Airman (Photographer) Joel Rouse, Crown copyright]Observed by military medical experts who assess the surgical group’s performance, Green Serpent is aimed at ensuring the group’s small surgical facility, a cluster of tents with A&E capabilities and an intensive care unit, is ready to support Royal Marines on operations anywhere in the world.
After a decade in Afghanistan, the commandos are returning to their amphibious roots as the mission in Helmand draws to a close. And as part of that return to what are known as ‘contingency operations’ - the ability to deploy around the world at short notice with the UK’s Response Force Task Group, the Commando Forward Surgical Group is at 5 days’ notice to move in support of the lead commando unit (currently 45 Commando based in Arbroath, soon to be 42 Commando from Bickleigh outside Plymouth).
The surgical group does not provide a full field hospital; its aim is immediate lifesaving treatment so that the wounded can be moved off the battlefield for more comprehensive care. It’s known in the business as ‘Role 2’ care, or a ‘damage control surgery facility’ (Role 1 is a regimental aid post, Role 3 is a field hospital or the impressive casualty treatment facility on board Royal Fleet Auxiliary vessel Argus). 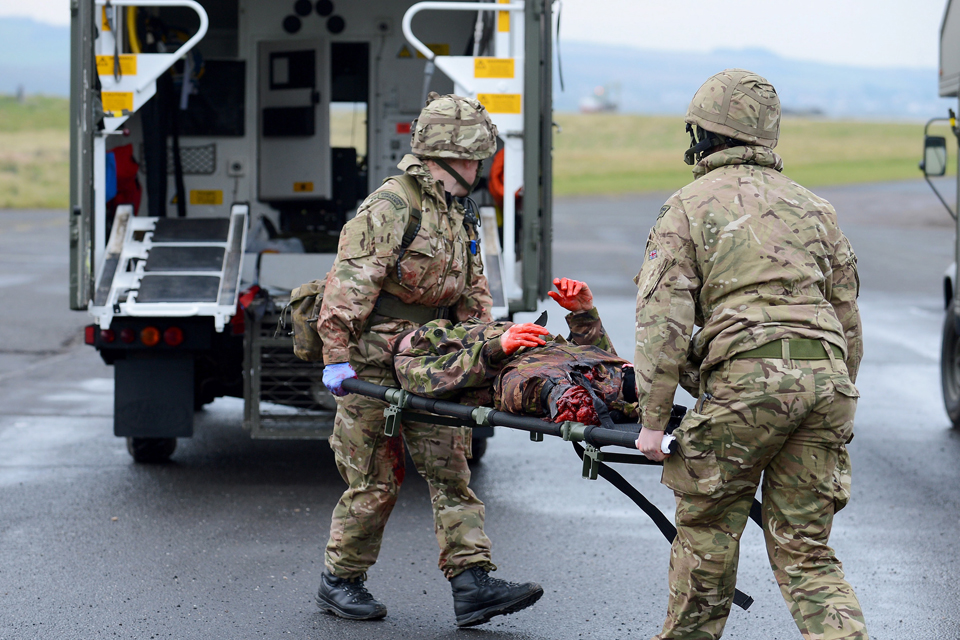 Commandos transporting a simulated casualty to a waiting ambulance [Picture: Leading Airman (Photographer) Joel Rouse, Crown copyright]Within 10 minutes a casualty should have been seen by a trained medic, within 60 minutes they should be off the battlefield and in the hands of a medic with advanced training, and within 2 hours of being wounded they should be in the hands of the surgical team.
The tent ‘complex’ features a 4-bed assessment area similar to an A&E department in a hospital, an operating theatre where staff can tend to 2 patients, 2 intensive treatment unit beds, a 4-bed ‘ward’ where casualties wait for onward transport to hospital, x-ray and ultrasound facilities, a laboratory and blood bank.
The whole facility can be moved around on 6 Land Rovers, 4 large trucks and 2 signals vehicles, accompanied by powerful field generators to meet the heavy electrical demands of the equipment. With everyone pulling together and working hard, it can be set up and ready to receive casualties in under 1 hour.
For the duration of Green Serpent, personnel have endured rugged living conditions: no showers, only ration packs for food and living in sleeping bags under ponchos on the edge of the airfield at Chivenor. 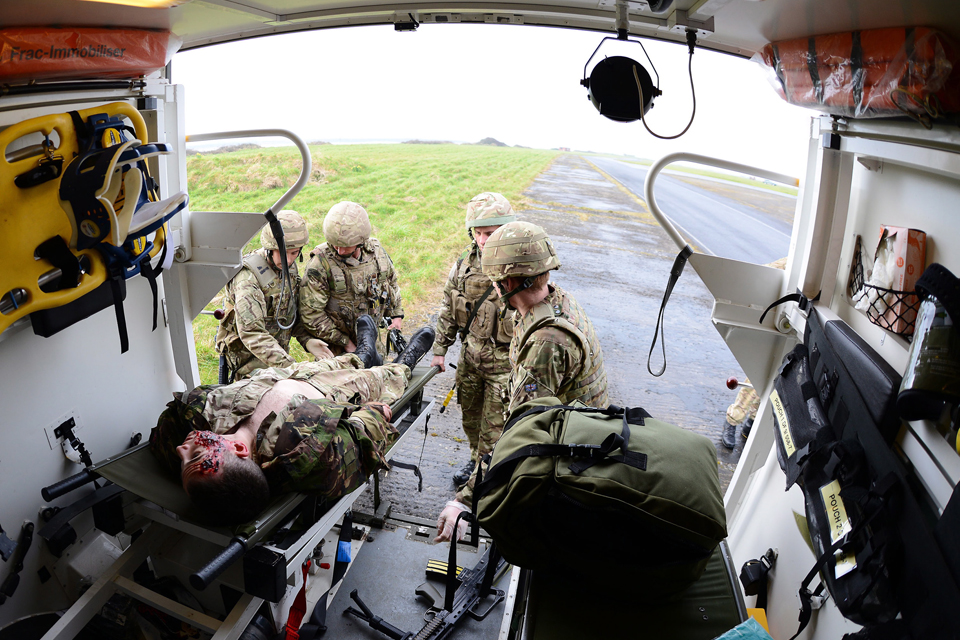 Inside the battlefield ambulance [Picture: Leading Airman (Photographer) Joel Rouse, Crown copyright]Surgeon Captain Andy Burgess, the Operation Clinical Director, is a veteran of 3 tours of duty in Afghanistan and, by day, is a consultant anaesthetist at Derriford Hospital in Plymouth. He said:

We try to provide as high a standard of care here as we might in the UK, but the medical care in this facility is not definitive - it’s about stopping the bleeding, it’s getting rid of the worst effects. It’s damage-control surgery so that casualties survive for the next stage of treatment.
​
We have a very swept-up system. Our experiences in Afghanistan have raised us to among the very best. But collective training like this is very important. It’s good to work in this environment. This is what we join up for.
​
Flight Lieutenant Kevin Pickles, who works at the Royal Centre for Defence Medicine in Birmingham, agrees:

We’re all singing from the same hymn sheet; we’re working and living together for 2 weeks, working as a team. The idea is to make it as real as we can - within reason.
​
I’ve enjoyed the exercise. It’s a good test - the system works. It’s how we do it in Afghanistan.
​ 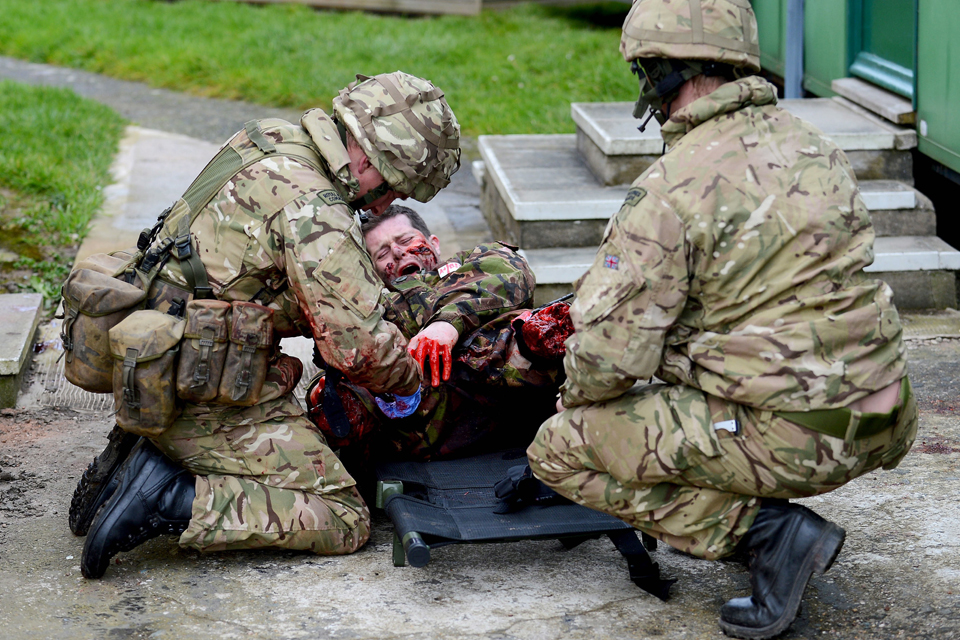 Commandos providing first aid to an actor simulating a battlefield casualty during Exercise Green Serpent [Picture: Leading Airman (Photographer) Joel Rouse, Crown copyright]Among the assessors of Green Serpent were Surgeon Commanders Jason Smith and Tony Kehoe. They are less interested in the medical prowess of the personnel, although that is obviously important, than ensuring that the entire surgical group meshes together as a team and that everything else such as fuel, food and medical resupplies are in place. Surgeon Commander Kehoe said:

The medical staff know their jobs - they’re all extremely proficient. What we’re testing here is the system. This is a hard environment to work in and in which to provide casualties with the best possible level of care.
​
Surgeon Commander Smith added:

You cannot replicate everything that we have in Camp Bastion in this facility; we’re taking the ‘big winners’ from Afghanistan and using them in expeditionary warfare.
​
We’ve made massive strides over the past 10 years when it comes to resuscitation thanks to our experiences in Afghanistan - we are now seeing lives saved, where a decade ago we would not have expected the person to live.
​