Through this mission we will support the Malian government to counter the violent insurgency that has not only disrupted their country, but which also poses a clear threat to our national interests here in the UK.
​
British support to the mission in Mali, including assistance with training, logistics and surveillance, highlights the impressive flexibility of our armed forces. British troops will not deploy in a combat role but, through training the Malian armed forces, we can assist in restoring order and denying terrorists a safe haven in the country.
​ 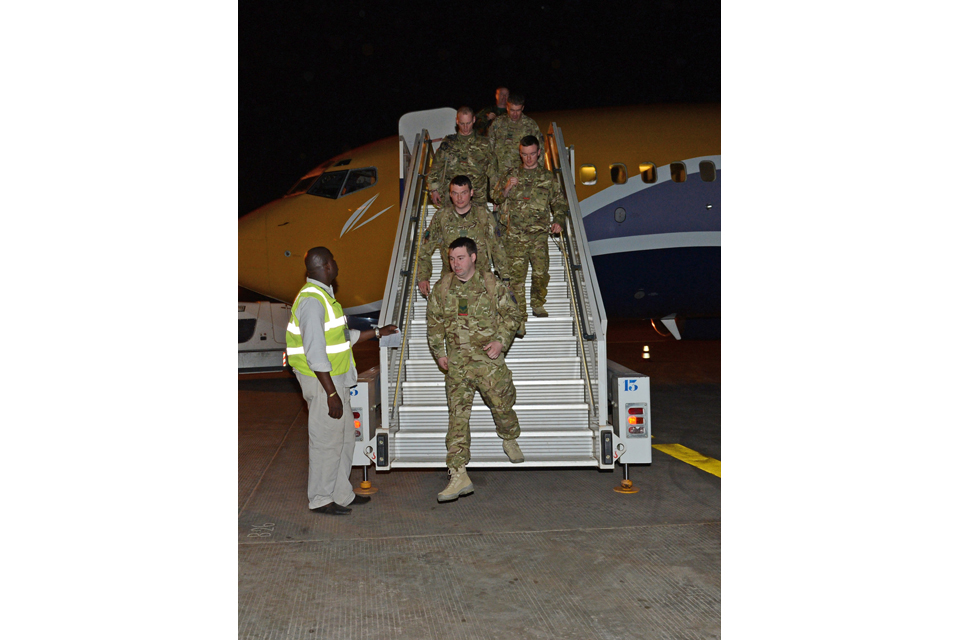 British troops arrive in Mali [Picture: Corporal Tim Hammond, Crown copyright 2013]Twenty one personnel from 1st Battalion The Royal Irish Regiment (1 R IRISH) arrived in the Malian capital Bamako yesterday. They will be joined by troops from 45 Commando Royal Marines and 29 Commando Regiment Royal Artillery completing the 40-man training team.
The British training team is augmented by 6 personnel from the Irish Defence Force, who travelled to Mali on the same aircraft and will work alongside their UK counterparts throughout the mission.
Major Simon Holden, 1 R IRISH, Commanding Officer of the Infantry Training team, said:

The Irish Defence Force is well versed in training and mentoring roles and it will be a privilege to command them. We have conducted several weeks of pre-deployment training together at Ternhill Barracks to prepare for the tour. It is an historic occasion.
​
As the Officer in command of the Infantry Training Team I will be responsible for orchestrating the training of Malian troops working alongside the French, Czech and Danish forces, as part of the EU mission to bring stability to the region.
​
The training mission is headquartered in Bamako, while training will take place in Koulikoro (60 kilometres north-east of Bamako). The mission is under the command of French Brigadier General François Lecointre and is expected to continue for around 15 months. More than 200 instructors will be deployed, as well as mission support staff and force protection, making a total of around 500 staff from 22 EU Member States.
The deployment of the training team is the latest UK contribution to international stabilisation efforts in Mali. Britain has already provided C-17 transport aircraft to support both the French and African nations, Sentinel surveillance aircraft and the transportation of French military supplies on board a roll-on-roll-off (RO-RO) ferry.
The 22 contributing nations that make up the EUTM are Austria, Belgium, Bulgaria, the Czech Republic, Estonia, Finland, France, Germany, Greece, Hungary, Ireland, Italy, Latvia, Lithuania, Luxembourg, Poland, Portugal, Romania, Slovenia, Spain, Sweden and the United Kingdom.