Both regular and reserve personnel from across the 3 services are undergoing their final preparations before they deploy to Sierra Leone on 20 December.

The 9-day, mission-specific training took place at the Army Medical Services Training Centre at Strensall Barracks near York. It is designed to test and develop clinical and organisational procedures.

Personnel undergoing the training carried out parts of the exercise in protective equipment, in a hangar converted into a mock-up field hospital treating simulated casualties.

UK military personnel were joined by members of the Canadian military and Danish healthcare workers.


Our armed forces have already played a leading role supporting the UK’s efforts to tackle Ebola and I welcome the deployment of reservist personnel to continue that crucial work.

During my visit to Sierra Leone last month, I witnessed the impressive contribution the military has provided to the fight against Ebola thus far; by treating infected healthcare workers, providing protective equipment training at the Ebola Training Academy, assisting in the build of 6 treatment units and providing logistical support across our operations.

Our personnel are doing very important work – for which they deserve our grateful thanks.
​ 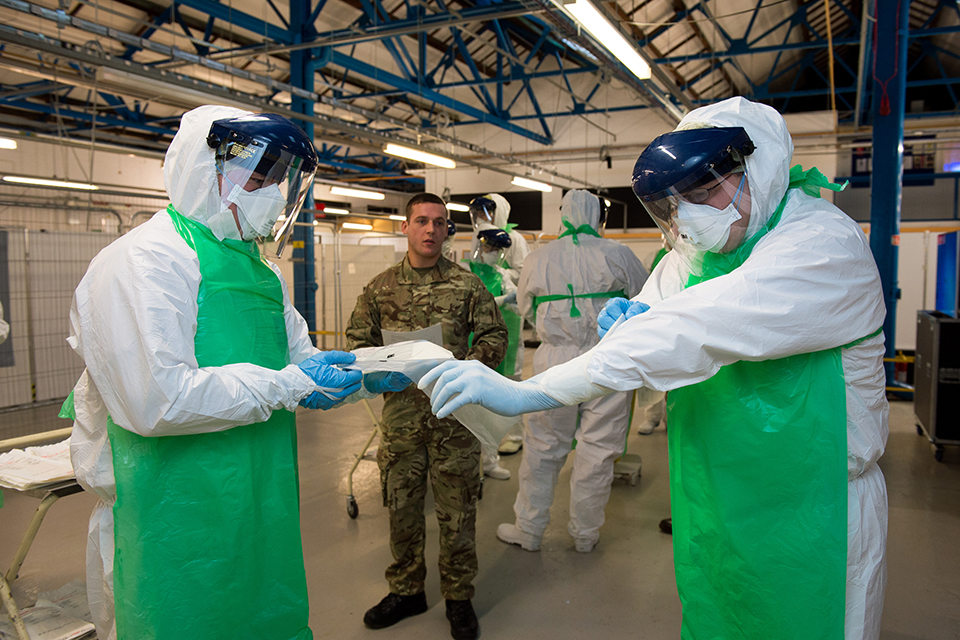 The personnel will deploy to Sierra Leone next week where they will take over from clinicians attached to 22 Field Hospital, who have been in country since October, manning the 12 bed facility reserved to treat healthcare workers with Ebola.

The number of military personnel in country remains steady at around 800.

This contribution is made up of logisticians, planners and engineers, who are overseeing the final stages of construction on the UK facilities across Sierra Leone, providing the infrastructure for a total of 700 beds.

Military personnel in Sierra Leone include the crew of RFA Argus which remains offshore, providing aviation support to the region.

Last weekend saw the Merlin helicopters help to lift 220 tonnes of supplies for the World Food Program to a remote part of Sierra Leone, unreachable by road.