Servicemen and women watched as the Union flag was lowered at Kandahar airfield, where RAF personnel have operated since 2001.


We have said farewell to British Forces in Helmand and now Kandahar, bringing to a close our combat mission here in Afghanistan.

The logistic effort involved has been immense, carried out with the utmost professionalism by Joint Force Support with logisticians from all three Services.

Our focus is now on the future, where those of us who will remain in Kabul will be concentrating on advising and assisting the Afghan National Security Forces at the Ministerial level and at the Afghan National Army Officer Academy.
​
Personnel from the RAF’s 904 Expeditionary Air Wing (EAW) boarded a C17 aircraft bound for the UK alongside colleagues from the Joint Force Support Unit which was responsible for supporting military operations in Afghanistan. 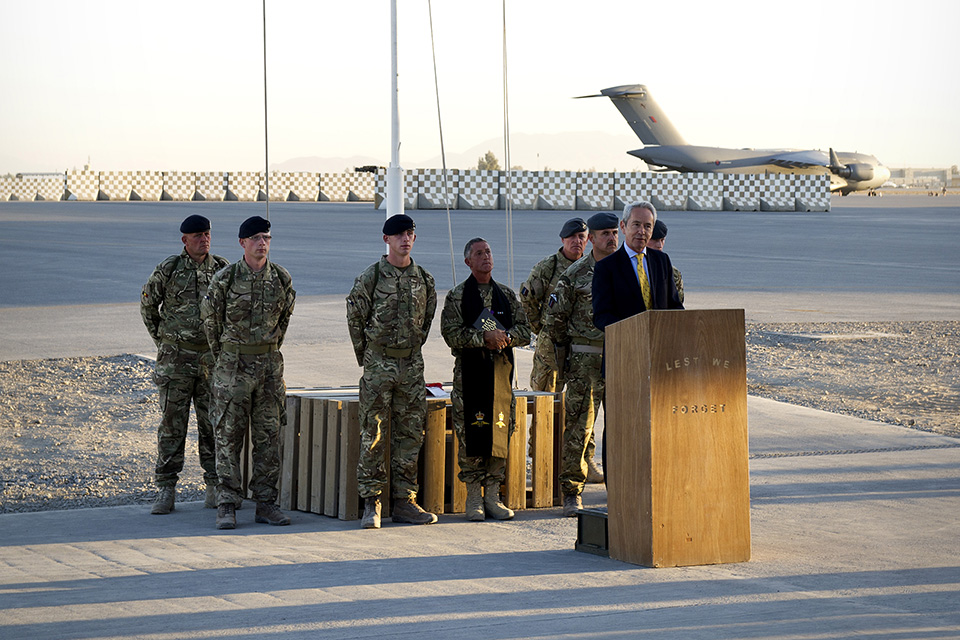 
I am enormously proud of the service that has been provided across Afghanistan by the RAF and at this time I offer my heartfelt thanks to all of the men and women involved, including those of 904 EAW, who have enabled and supported that effort.

Since Operation Herrick started in 2006, RAF personnel across all trades and specialisations have worked tirelessly to support allied operations in Afghanistan with strategic and tactical Air Transport from the UK to the battlefield, provided air to air refuelling, vital close air support, intelligence and reconnaissance gathering, force protection and a multitude of other roles.
​
The Defence Secretary Michael Fallon said:


Britain’s armed forces can take great pride in the completion of their deployment to Southern Afghanistan.

Thanks to their courage and dedication, the country has the best possible chance of a stable future. Our departure from Kandahar airfield therefore is an historic milestone.

Looking to the future, the UK’s focus now switches to training the Afghan Army’s future officers and providing continuing support to the security ministries in Kabul.
​
Just before leaving Kandahar Brigadier Darrell Amison, Commander Joint Force Support (Afghanistan), paid tribute to the sailors, soldiers, airmen, civil servants and contractors who have worked in Afghanistan. Their efforts have significantly reduced the threat of terrorist attacks to the UK.


Click here for a timeline of the UK’s involvement in Afghanistan.