AB Gasson’s grave was re-dedicated with a new headstone, now bearing his name, at Esbjerg New Cemetery in Denmark in a service organised by the MOD’s Joint Casualty and Compassionate Centre, part of Defence Business Services.

AB Gasson served on HMS Castor and was killed during the Battle of Jutland on 31 May 1916. His body was recovered about 2 nautical miles off Grey Deep on 25 September 1916 and buried as a ‘British Seaman of the Great War Known Unto God’ 5 days later on 30 September 1916.

The local people of Esbjerg maintained the grave for almost 100 years but it wasn’t until local historians looked into the church records to find it was recorded that the sailor had the name H. Gossom written in his trousers. After work by the Commonwealth War Graves Commission (CWGC) and checking naval records, the MOD was able to agree that the identity of this sailor was actually H. Gasson, and there had been an error in the transcription.

The Battle of Jutland involved some 250 ships and 100,000 men. The battle, off Denmark’s North Sea Coast, was the only major naval engagement of the World War 1 and at its end, 6000 British personnel had lost their lives, one of them AB Gasson.

The 11th Flotilla was spotted by the German ships. The Germans approached and used the response to the British challenge signal that they had seen used earlier. This meant that they were able to approach much closer than usual. At about a 1 mile range, the German ships switched on the searchlights and opened fire. HMS Castor returned fire, and she and 2 of her destroyers (Marne and Magic), each fired one torpedo at the German ships. This exchange lasted for 5 minutes before both sides turned away. Some of the other destroyers reported that they were unable to see the enemy because of glare from Castor’s guns, while others believed there had been some mistake and this was actually friendly fire. Castor received 10 hits, killing 10 people and injuring several more. One of those killed was AB Gasson.

The service, presided over by Royal Navy Chaplain The Reverend David Simpson, formally recognises AB Gasson’s final resting place and brings closure for his surviving relatives, who were traced by MOD’s Joint Casualty and Compassionate Centre so they could attend the service. 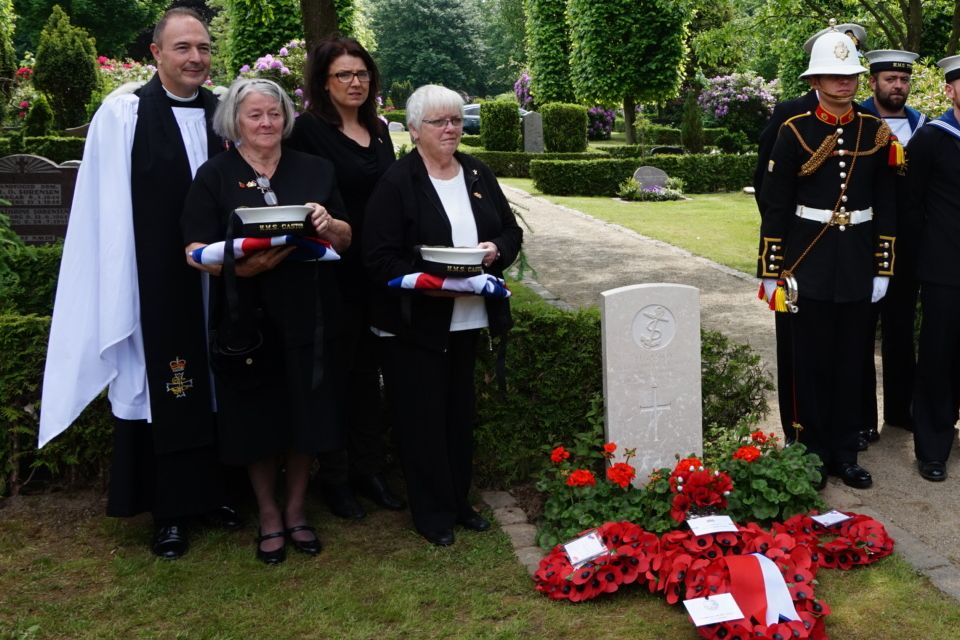 Relatives and representatives from the Royal Navy attend the service on 31 May 2016. Crown Copyright. All rights reserved.

AB Gasson’s Great Niece, Barbara Pritchard, and Great Great Niece Michelle Enrof, both from Toronto, Canada, and his cousin once removed, Maggie Compton from Ludlow in Shropshire, travelled to Denmark to be present. Maggie Compton said:


It was a very emotional day and we are so happy that Harry finally has a named grave. We are extremely grateful to everyone that has worked so hard to make this happen.
​
Also attending were representatives from the Ministry of Defence’s Joint Casualty and Compassionate Centre, Ship’s Company from HMS TYNE, representatives from the CWGC, local historians and the UK’s Ambassador to Denmark.

Commodore Ian Bisson Royal Navy, who heads up the Joint Casualty and Compassionate Centre and attended the service, said:

“I am honoured to be in Jutland to mark such a historic day with such a moving ceremony. This was a very personal story of one sailor who gave his life, but which represents the many who were lost one hundred years ago”.