News story: British army officer killed during WW1 is honoured as he is laid to rest

2nd Lieutenant (Lt) Eric Henderson who served with the 8th (City of London) London Regiment ‘Post Office Rifles’, has finally been laid to rest after he was killed on the first day of the Battle of Messines during WW1. 2nd Lt Henderson was buried during a moving ceremony at the Commonwealth War Graves Commission (CWGC) Oak Dump Cemetery, near Ypres in Belgium. 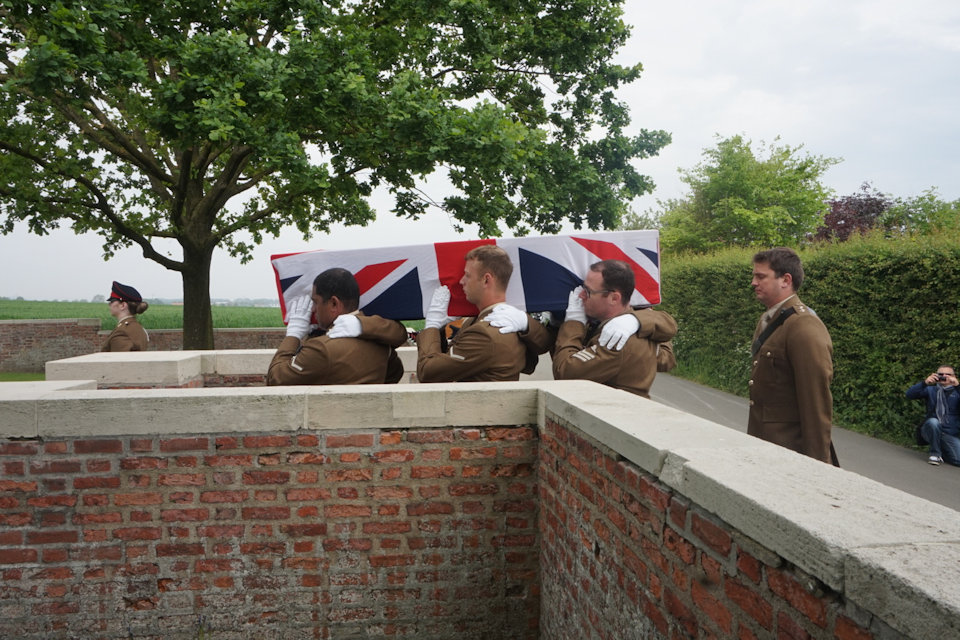 The service, organised by the MOD’s Joint Casualty and Compassionate Centre (JCCC), part of Defence Business Services, was held on Wednesday 16 May 2018 and was conducted by the Reverend Thomas Hiney CF, Chaplain to the 19 Royal Artillery Regiment. 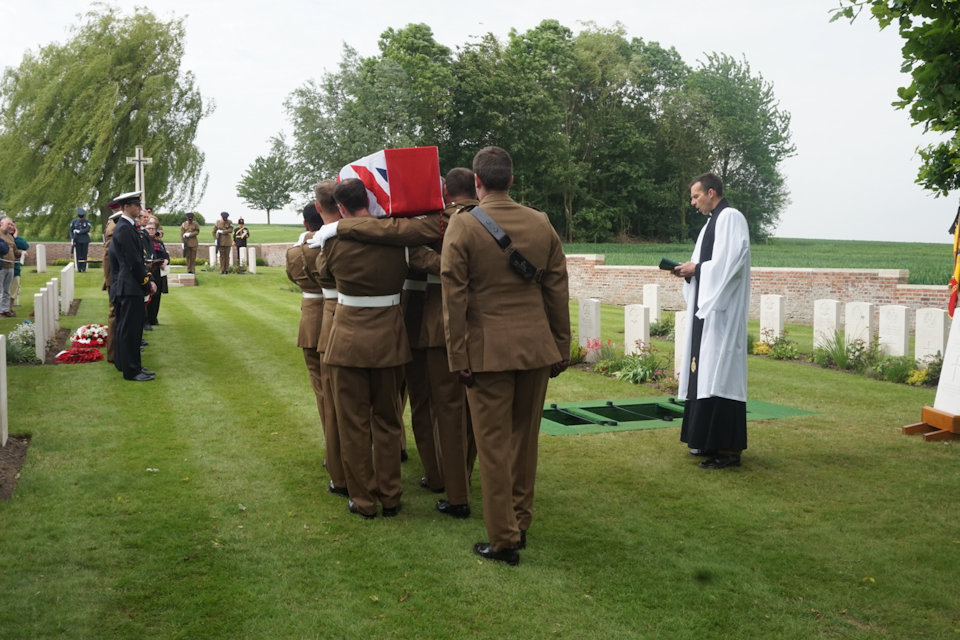 
It’s a great honour to be here today to lay this brave man to rest, who fought so courageously alongside his comrades. I am particularly grateful that Eric’s family were able to be here to witness him being finally laid to rest after so many years.
​
Although over 100 years have passed since Eric’s death, we passionately believe in continuing to honour his sacrifice and the sacrifice of all members of the Armed Forces who are lost in battle.
​ 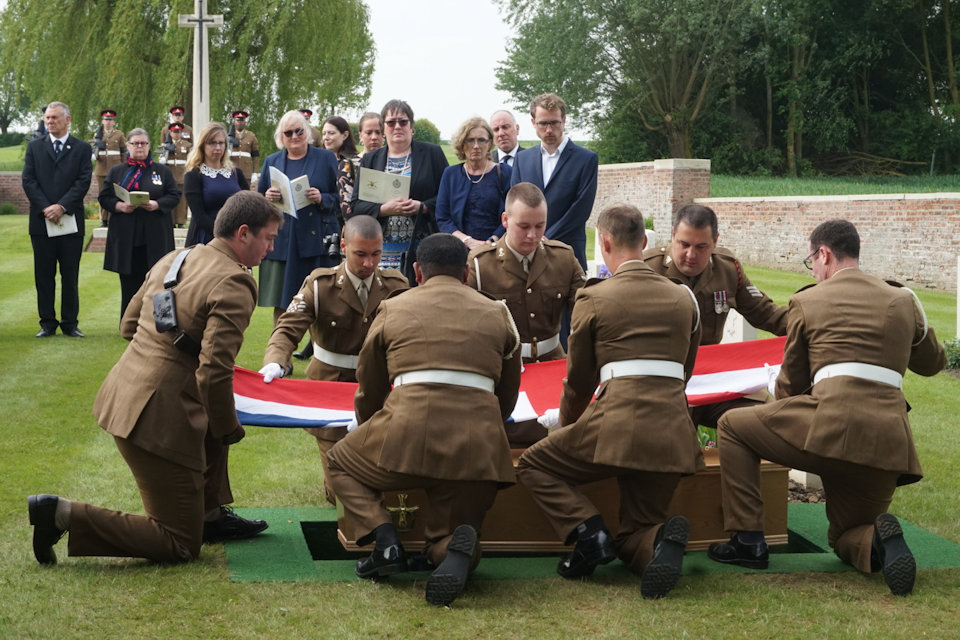 2nd Lt Henderson was killed in action on 7 June 1917 aged 21 years old, near the village of Messines in West Flanders, Belgium. He was found a century later during road works in the area of Eekhofstraat, near Voormezele in Belgium. He was found with several artefacts including a silver coin that was engraved with ‘2nd Lt. Eric Henderson, London Regiment’. Further research, conducted by the JCCC, showed that the location of the soldier was exactly where the Oak Reserve Line was during the Battle of Messines, which corresponded with the location of Eric’s regiment on the day of his death.

The beginning of the Battle of Messines was signalled by the explosion of 19 mines that had been laid under German lines. The shock of the explosion was overwhelming and devastating to the enemy. The objectives of the Post Office Rifles on the day were to capture portions of the four lines known as Oak Trench, Oak Support, Oak Reserve and Oak Switch as well as a formidable strongpoint known as the ‘Dammstrasse’. Many of the causalities of the Battalion were due to machine-gun fire from the White Chateau, one of the objectives of the 7th Battalion. Some of the 1/8th took part in the attack on this Chateau, and materially assisted in its capture. 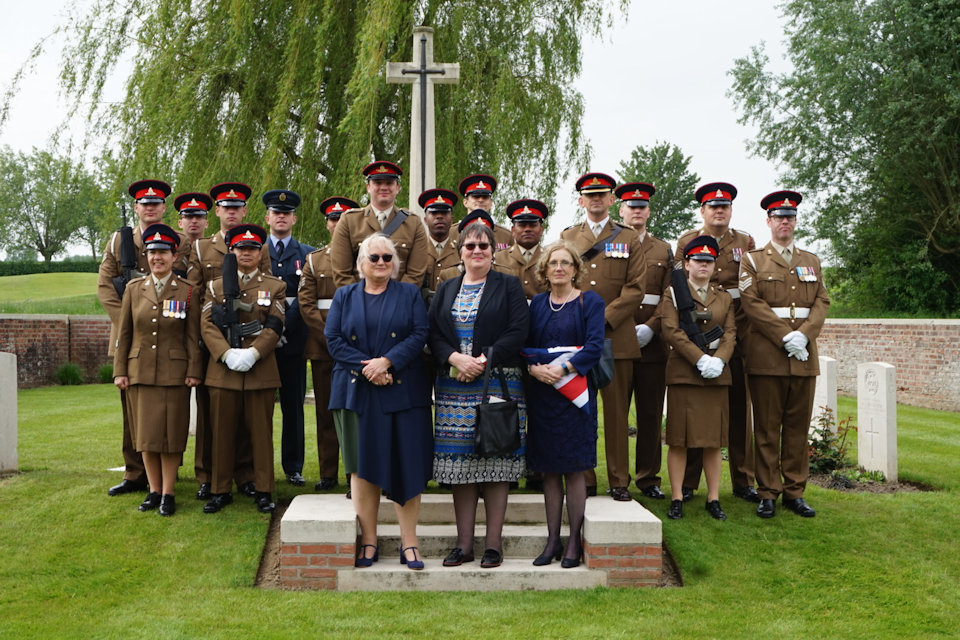 Family members who paid their respects to 2nd Lt Henderson included his three great nieces, Lucy Cocup, Sarah Foot and Judith Leyman, as well as members of their own families.


Being here in Ypres, and knowing Eric’s resting place, means an awful lot to us. He wasn’t a dusty memory in our family, but part of our mental landscape.
​
Reverend Thomas Hiney CF said:


These war cemeteries of northern France and Belgium are one of the wonders of the modern world. To add to one is of course poignant. These stories still feel very alive to our national memory.
​
Sub Lieutenant Harry Lewis from the British Embassy in The Hague was also in attendance. Current members of the Royal Artillery Regiment paid their own tribute by providing the bearer and firing party.


For almost a century, 2nd Lieutenant Eric Henderson was remembered with honour on the CWGC’s Ypres (Menin Gate) Memorial to the Missing – one of tens of thousands of young men whom the fortune of war denied a known grave. When the memorial was unveiled in 1927, the assembled mourners were told ‘He is not missing. He is here’. Today, thanks to the efforts of many, that statement has new meaning for Eric and his family.
​ 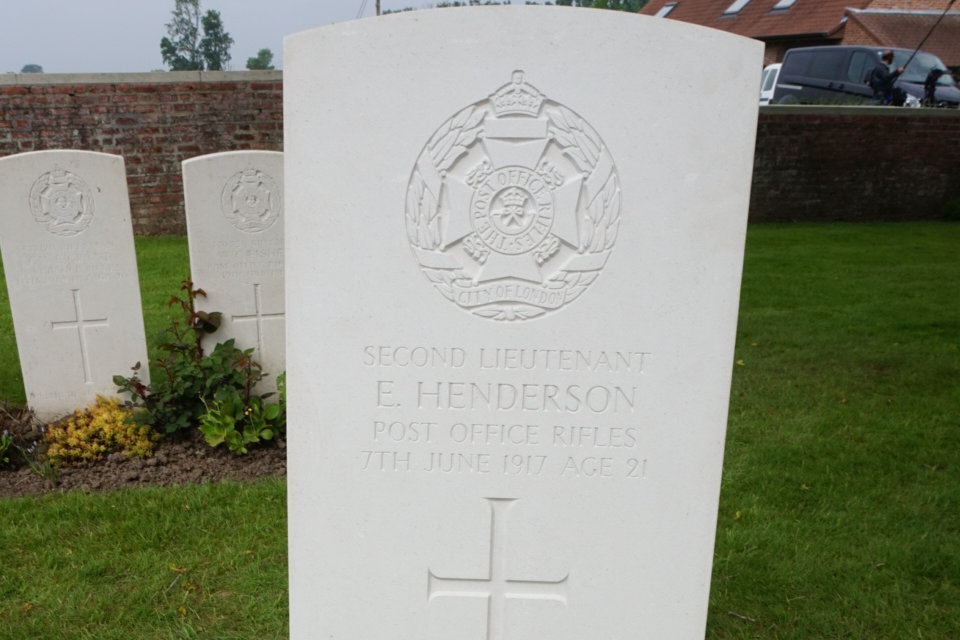 A new headstone bearing 2nd Lt Henderson’s name has been provided by the CWGC, who will now care for his final resting place in perpetuity.

News story: Royal Navy sailor killed during World War 1 is honoured as he is laid to rest