Ministry of Defence said:
The transport aircraft flew more than 120 soldiers of Ghana’s Engineering Company 1 to Mali’s capital with vehicles and equipment in response to a request for assistance from Ghana.
They will build accommodation and support engineering projects as part of the African-led International Support Mission to Mali (AFISMA).
The UK, concerned by the situation in Mali and the threat that violent extremist groups in the north pose. The UK is assisting the Ghanaians by making a C-17 aircraft available this week.
Minister for the Armed Forces, Andrew Robathan, met RAF crew members working on the airlift at Bamako during a 2-day visit.
He said:

I came out on behalf of the government to see first-hand what is happening out here, where our troops are deploying, where there’s a huge French presence and where there is a terrorist situation that actually threatens the United Kingdom as well.
​
We have said we don’t want to have troops on the ground but we are helping the French effort and we’re helping the African effort as well. We’re going to help train Malians with the EU training mission too.
​ 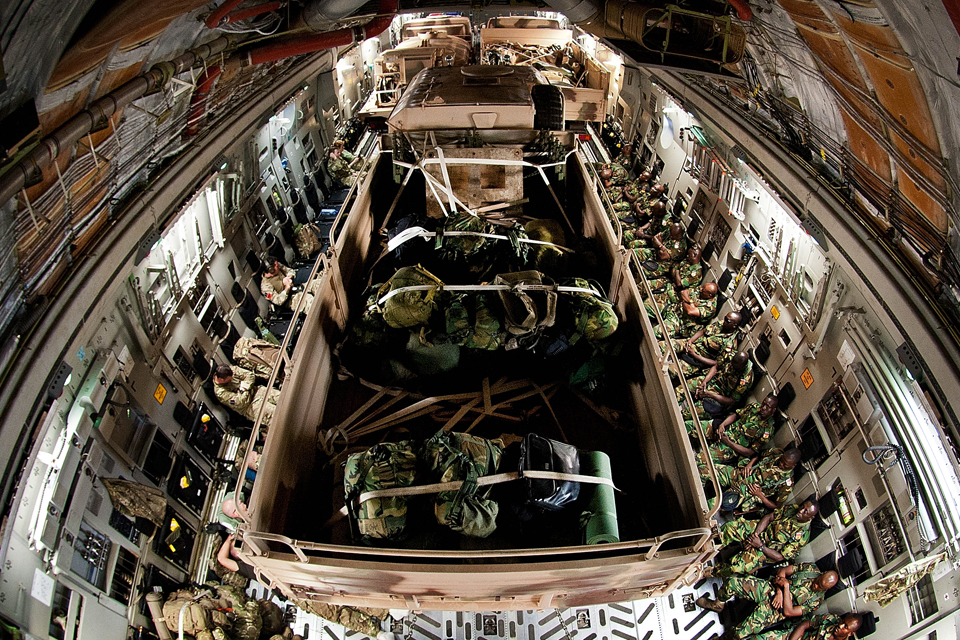 A fully loaded RAF 99 Squadron C-17 aircraft carries the first deployment of Ghanian troops into Mali [Picture: Sergeant Ralph Merry RAF, Crown Copyright/MOD 2013]The evolving threat in Mali requires international partnerships, which is why the UK has been a firm supporter of the UN Security Council Resolutions on Mali as well as regional leadership from Economic Community of West African States and the African Union and EU training to help rebuild the Malian army.
Colonel M’Bawine Atintande, Director of Public Relations for the Ghana Armed Forces, said:

Ghana is sending an Engineer Company that’s more than 120 of all ranks. The company will play every specific role. We expect the forces to be there as long as it takes to solve the problem. Normally we stay in the six months and then rotate.
​
The UK has given us so much support. Before AFISMA we have had so much support from Britain, including a training team.
​
There is training assistance they have given us in preparing the troops for the mission so by and large the UK government has given us so much that we need in the mission.
​
As well as providing logistical support and C-17 aircraft to support the French-led intervention in Mali last month, the UK also offered up to 40 personnel for the EU training mission to Mali and up to 200 personnel in support of the African-led support mission.
Negotiations are continuing on the details of the UK’s contribution.