Improved Maritime Search and Rescue co-operation will be a particular focus, and during his visit Sir Michael offered Cyprus the chance to display alongside the international community at Royal International Air Tattoo 2017 and reviewed opportunities for naval personnel exchanges.


Britain is stepping up its global role and Cyprus is a key partner in promoting European security and stability.

We have now committed to strengthen our defence partnership with greater co-operation in areas such as counter terrorism, maritime security, and crisis response.
​
The Defence Secretary also announced the continuing commitment to train senior Cypriot Officers at the Royal College of Defence Studies together with other training being opened up on the Advanced Command and Staff Course.

Sir Michael’s visit comes at an important time for Cyprus, following the UN-facilitated talks held in Geneva in January, and as negotiations continue towards a solution to the long-standing Cyprus issue. The Defence Secretary confirmed that as a Guarantor Power, the UK will do whatever necessary to secure a settlement and our priority is for both sides to find an agreement allowing each community to feel secure. 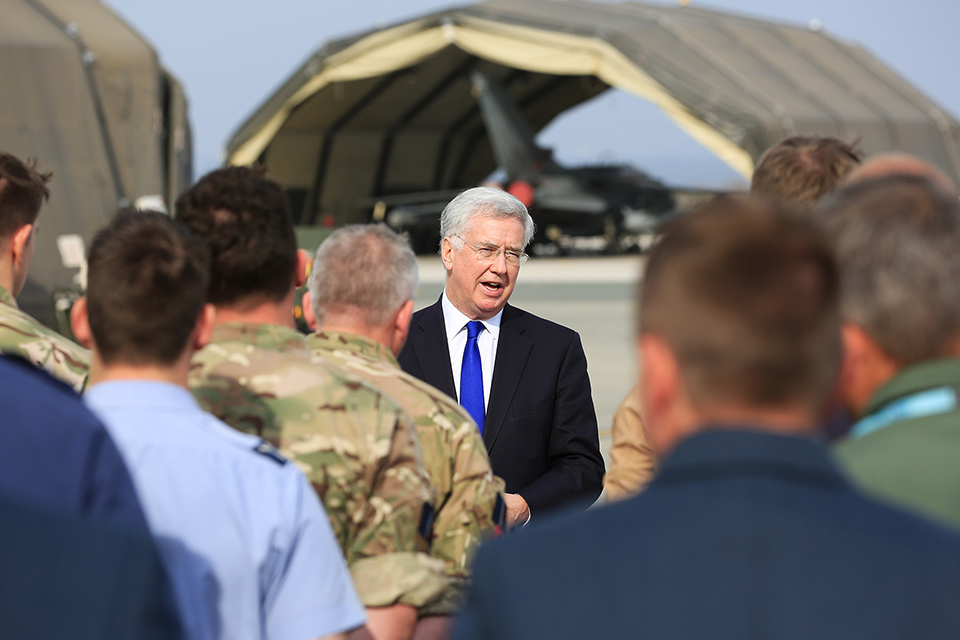 The Defence Secretary also took the opportunity to thank the Cyriot Minister for their support to Op Shader, with British aircraft operating from RAF Akrotiri, and Cyprus’ own contribution including to the foreign fighters part of the campaign. Sir Michael visited RAF Akrotiri, meeting with 903 Expeditionary Airwing later in the day. Since Sir Michael’s last visit in September last year, the RAF has attacked 330 further terrorist targets in and around Mosul, working in the closest possible cooperation with the brave Iraqi troops.

News story: Cyprus RAF base offered in support of French