The Grenadier Guards were formed from gentlemen from Henry VIII’s Honourable Artillery Company who had taken the then heir to the throne, Prince Charles (later Charles II), to Europe for his safety during the English Civil War.

Following the execution of his father King Charles I in 1649, and the creation of Cromwell’s Commonwealth Republic in England, the young King Charles II was sheltered by Spanish run Flanders and plotted the restoration of the British Monarchy in the Royal Guild of St Sebastian in the heart of Bruges, Belgium.


Princess Astrid of Belgium unveiled a monument to the British King Charles II near the Grote Markt in Bruges on Friday afternoon and troops from the Belgian Grenadiers, and the British Army’s Grenadier Guards, Honourable Artillery Company and the Life Guards of the Household Cavalry paraded through the city.

Speaking on the eve of the occasion to mark the anniversary Secretary of State for Defence, Michael Fallon said:


The marking of the Grenadier Guards historic link with Belgium underlines how Britain has been and will continue to be committed to co-operating on security with our European allies.
​
On Saturday Nijmegen Company Grenadier Guards will once again march through the city to their birthplace, the Royal Guild of St Sebastian.


The Grenadier Guards’ ties with Belgium are numerous. They fought in nearly all the principle battles of the Western Front in the First World War in Belgium. At the Battle of Waterloo in 1815 they were awarded their present day title of “The Grenadier Guards” in Belgium, and distinguished themselves once again with the liberation of Brussels in the Second World War. 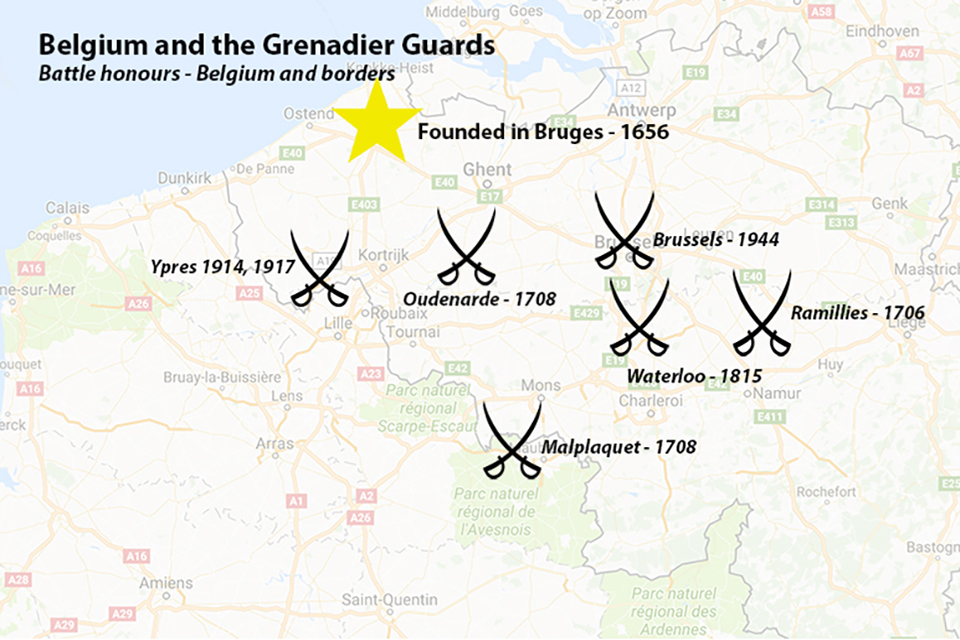 The UK continues to value its close and lasting alliance with Belgium, which long predates the European Union and NATO. Today Britain’s contacts with its neighbours across the channel remain strong, in culture, tourism, transport, investment and trade. The UK is Flanders’ fourth largest trading partner and Flanders is the seventh most important commercial partner for the UK.


We cherish this special relationship with Great Britain and support wholeheartedly the anniversary festivities in Bruges. Since their creation in 1656 the Grenadier Guards have fought in all conflicts in our region to safeguard our liberty. Enough reason I think to celebrate with the officers and men of the Grenadiers their Flemish roots and our steadfast friendship.
​
In the 21st Century the Grenadier Guards continue to serve the UK with distinction and were one of the final units involved in ground combat in Afghanistan. In their ceremonial role of The Queen’s Guard they are also the stars of innumerable tourists images of London’s Changing of the Guard at Buckingham Palace.