Ministry of Defence said:
Footsteps on the path. There’s a knock at the door. A family’s world is about to collapse.
Receiving a call from a notifying officer to say that a family member has been killed while serving in the Armed Forces must be every Service family’s worst nightmare. But even while the dreadful news sinks in, a dedicated team of people, who the family will never meet, are moving heaven and earth to provide the support they will need at this terrible time. It’s a silent relationship that might endure for years.
It is the Joint Casualty and Compassionate Centre (JCCC) based at Imjin Barracks who, as part of the Service Personnel and Veterans Agency (SPVA), receive that first awful phone call saying that there has been an incident. From that point on it is their job, working behind the scenes, to support the family in dealing with the grim practicalities of the death of a loved one.
Repatriation of the deceased is just one small part of the process:

We support our people throughout their life,” explains Sian Gausden, SPVA’s media officer, and a member of the out-of-hours support team. “When they start we give them their ID cards, put them on the payroll and give them their allowances. If they are injured we pay their compensation, and if the worst happens we repatriate them.
​
But we don’t just leave the families after the funeral, we provide welfare support through the Veterans Welfare Service and can help in sorting out the deceased’s estate, putting up headstones or memorials. We also do our best to process any medals that may be due so that the families can be given them at the repatriation.
​ 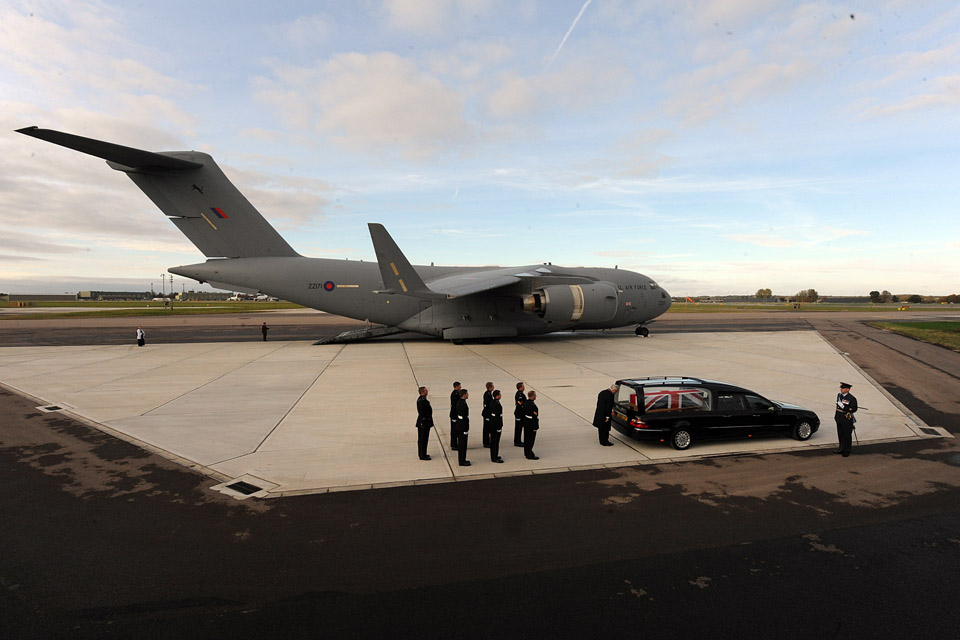 A repatriation ceremony takes place at RAF Brize Norton (library image) [Picture: Richard Watt, Crown Copyright/MOD 2012]Several members of the team are qualified registrars so that death certificates can be issued to ensure that the family has all the documentation they need as quickly as possible. Due to the nature of the work of the Armed Forces, repatriations can be required from anywhere in the world.
During the winter, skiing and climbing expeditions can result in the JCCC receiving a call. But of course it is from Afghanistan that most repatriations are made. John Pollard, a civil servant now, but, in a previous life, an RAF warrant officer with more than 30 years’ service, has worked at the JCCC since its creation in 2005:

The moment we are notified of a death we task our contractor, Albin International Repatriation, and their funeral director flies out to theatre in order to take care of the deceased in the mortuary at Camp Bastion, and during their return to the UK,” he says. “We use a contractor as MOD doesn’t have the specialists that are needed for a repatriation.
​
Any members of our Armed Forces who die in Afghanistan, be they British, Fijian, Gurkha or any Commonwealth nationality, must first be brought back to the UK under the jurisdiction of the coroner so that an inquest can be held. Once the coroner has finished, they release the deceased to the contractor who will dress the deceased in their uniform, or in a manner in accordance with the family’s wishes, and convey them to the family’s funeral director, which could mean onward transit to Fiji or to Nepal. John says:

No repatriation is ever the same.
​
Out of respect for the families he won’t be drawn on the details:

I never talk about them, because someone might pick up that we had difficulties getting someone home - and they don’t need to know anything about that. All they need to know is that their loved one was treated with respect and dignity throughout.
​
Often the families wish to talk to the person from Albin’s who accompanied the deceased back to the UK. Sian says:

It gives them a bit of comfort to know that someone has been looking after their loved one for the whole time, from the moment they fell.
​
As soon as the notification comes in, the ball starts rolling:

We could get a call at any time telling us there has been an incident resulting in, for example, 4 very serious injuries, 2 unlisted casualties and a death,” says John. “The details come through on Joint Personnel Administration and we get the kinforming process going. Say he’s Army - we would contact HQ Support Command at Aldershot to say they need to identify a notifying officer nearest to where the next of kin is living.
​ 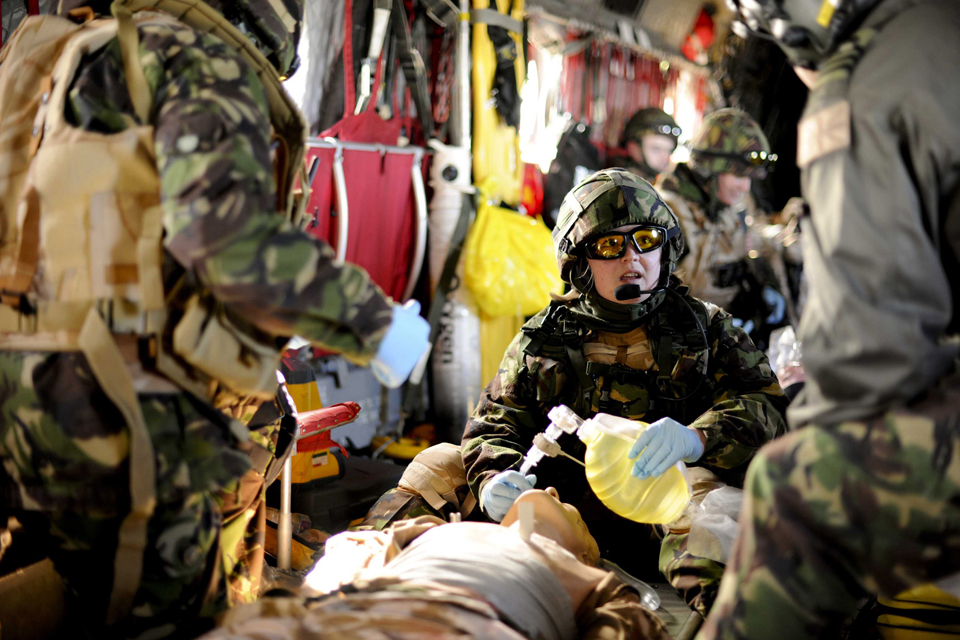 Medical Emergency Response Team members train for operational deployment (library image) [Picture: Senior Aircraftman Neil Chapman, Crown Copyright/MOD 2010]The notifying officer then makes their way to the address he has been given, and, before knocking on the door, calls the JCCC to see if there are any more details that have come through that he can tell the family. John adds:

Experience has told us that it is better for the family to know as much detail as we can give them about what happened and what condition their loved one is in, unless we have been advised that due to the state of health of the family that it would be too stressful for them, if for instance the mum is frail.
​
Within 24 hours of the family being told, a visiting officer takes over and becomes the JCCC’s contact with the family, asking them for all the information that is needed to sort everything out for them. For those who have died on operations, repatriations include a military ceremony when the coffin arrives at RAF Brize Norton. Close family members are made welcome, and the JCCC sorts out the details:

They are told by the visiting officer that the ceremony is for the military to say farewell to their comrade. Although it is difficult, they can be there, and will be allowed a short time with their loved one, but the family’s funeral comes later,” says John. “On the day most of them are overwhelmed by the experience.
​
The work can be stressful, but it is rewarding too. Occasionally it may all get too much, but at these times the team pulls together and supports each other.

Every day is challenging,” says case officer Janice Baker. “But whatever you are dealing with, it affects people’s lives. It’s often sad, but you get on and do the best job you can.
​
This report by Ian Carr features in the February 2013 issue of Defence Focus magazine - for everyone in Defence.