They were given a dignified service on Tuesday 28 March 2017 at the Commonwealth War Graves Commission (CWGC) Ancona War Cemetery in Italy. The service, organised by the MOD’s Joint Casualty and Compassionate Centre (JCCC), part of Defence Business Services was conducted by The Reverend Jonathon Daniel CF (UB) Royal Army Chaplain’s Branch.


These brave men were prisoners of war and being transported by the Germans when they were killed. The service today was to honour all 3 and to enable their families to have closure after over 70 years.


It has been a privilege for the Joint Casualty and Compassionate Centre to organise this service.
​
Reverend Jonathon Daniel CF(UB) said:


In our act of rededication we finally, after many years, complete our duty to correctly mark the place where our brothers in arms are buried. Today we honour and remember our 3 comrades whose lives were taken so cruelly and so unnecessarily. May their story serve to harden our resolve to cherish human life and do all that we can to live peacefully with one another.
​ 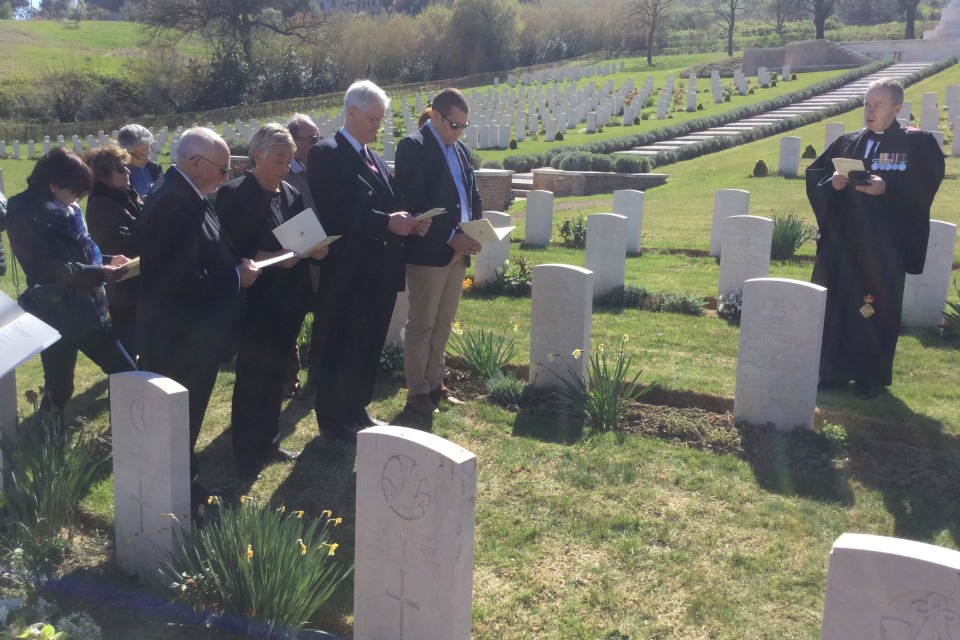 Some 6 months after escaping Camp 53 at the time of the Italian Armistice in September 1943, Pte Brown was joined by Ptes Hollingsworth and White on 5 March 1944 who were hiding in a nearby farm. En-route to Perchia they were accompanied by another man who they met known only to them as Adriano, thought also to be an escaped prisoner of war. Arriving at Perchia they made enquiries concerning the next expedition through enemy lines but no information was available so they went to a nearby farm for the night. Adriano left them stating he was going to sleep at another farm nearby but it later transpired Adriano was a German soldier.

At approximately 5am the next morning a party of German soldiers raided the farm where they were hiding and all 3 were arrested. Immediately afterwards a neighbouring farm was raided and Sergeant Mario Mottes from a Belgian parachute regiment, was also arrested. The prisoners were then marched to a German post where they were questioned and finally placed under guard. On 10 March 1944 all 4 were being transported when their lorry was stopped at Ponte Del Diavolo and they were shot.


The uncertainty over the final resting place of our uncle Lionel is something that has troubled our family for many years.


It is comforting to know that his sacrifice for our country has been recognised with a full and moving military ceremony, and that we now have a point of focus for our remembrance.
​
Commander Neil Thompson OBE RN the Naval and Air Attaché from the British Embassy and representatives of the Parachute Regiment, Princess of Wales’s Royal Regiment and the Buffs (Royal East Kent Regiment) also attended and paid their respects.


I am proud and honoured to be representing the British Embassy at the rededication ceremony of 3 soldiers who lost their lives during the Italian Campaign under such tragic and dramatic circumstances in 1944. These 3 soldiers’ dedication to duty by escaping from POW camps and trying to make their way back to fight again is indicative of the kind of war-winning spirit and courage found right across our great nation in the dark days of the Second World War.


It was really good to meet the families represented here today and I hope that we have given some comfort and closure to them. But above all, we have been able to give the soldiers themselves an identity and a lasting memory as they lie here in their final resting place just outside Ancona.
​
Three new headstones bearing each of the soldier’s names have been provided by the CWGC, who will now care for their final resting place in perpetuity.