Today’s service honoured all those - Navy, Army and RAF - who have served and continue to serve in bomb disposal roles and training teams across the world.

His Royal Highness Prince Harry attended the service, along with Minister for Reserves Julian Brazier and Minister for Personnel and Veterans Mark Lancaster, who is a bomb disposal officer in his reservist role. Also paying tribute, were senior military, serving and retired EOD personnel, their families and descendants.

Colonel Jools M Holland OBE DC, who is an Honorary Colonel to 101 (City of London) Engineer Regiment (Explosive Ordnance Disposal), gave a speech during the service.


We stand here today on sacred ground to give thanks for the men and women of the three Armed Services who have worked for that noble cause of protecting human life.

The story of the men and women who have worked in Explosive Ordnance Disposal is the story of teamwork and bravery, and often of great personal cost and the ultimate sacrifice.
​
Paying homage to the bravery and life-saving contribution by all in bomb disposal current and former members of the EOD gave accounts of the parts played by EOD units throughout the Second World War and during the conflicts of Northern Ireland and Afghanistan. 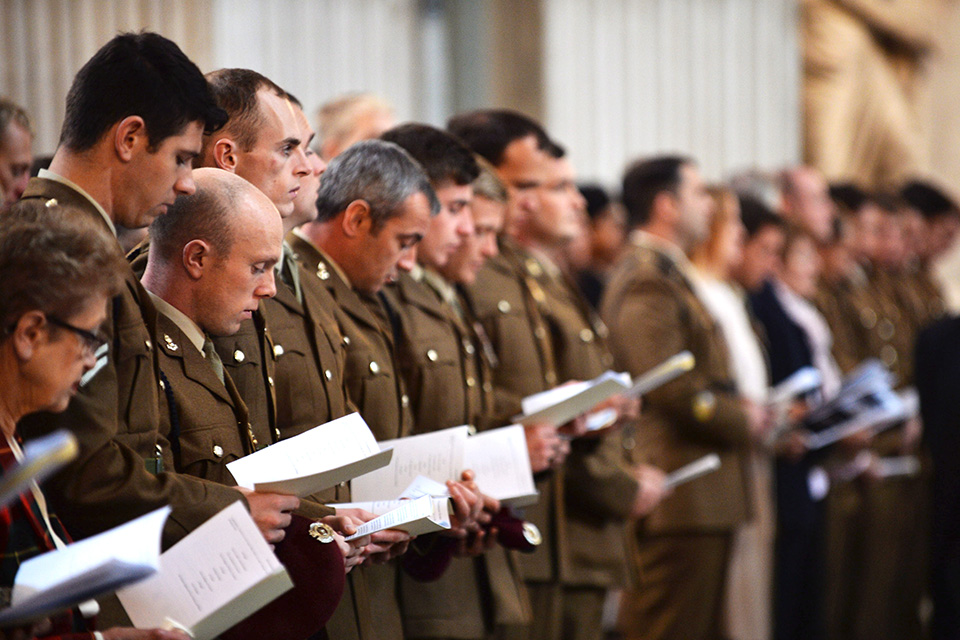 The Army’s Royal Engineer Bomb Disposal teams were formed in 1940 in response to the impact of the blitz on the UK’s cities. The Royal Navy, Army and RAF today continue to deal with the threat of bombs and IEDs on operations abroad and at home, and to train others. At the very moment we pay tribute to this courage, Army bomb disposal experts are training Iraqi Security Forces to tackle IEDs from ISIL, and Royal Navy divers are on a task to deal with WWII mines off the Scottish coast.

Following the service, Prince Harry met families of some of those killed in action from the EOD community, as well as personnel who have suffered life-changing injuries in service.


While we recall past acts of heroism in the Second World War, Northern Ireland, and Afghanistan, and in service in this country and around the world, we remember too the great dangers in which we remain as a result of our unhappy divisions, and we pray for those who continue to protect our safe passage through life both here and abroad.
​
The service formed part of a series of ‘BD75’ events marking the continued contribution of bomb disposal in previous and current operations.