As a 25-year-old electronics technician in the Army I didn’t think I had much in common with The Queen at all, writes Rebecca, but it turns out there’s more than I thought.

For a start, we have the same birthday — 21 April. I don’t know what The Queen will be doing for hers this year but I’m going to be on a battlefield tour in France.

And during the Second World War, she rolled up her sleeves and got her hands dirty serving as a mechanic in the Auxiliary Territorial Service (ATS) — doing a job just like mine. 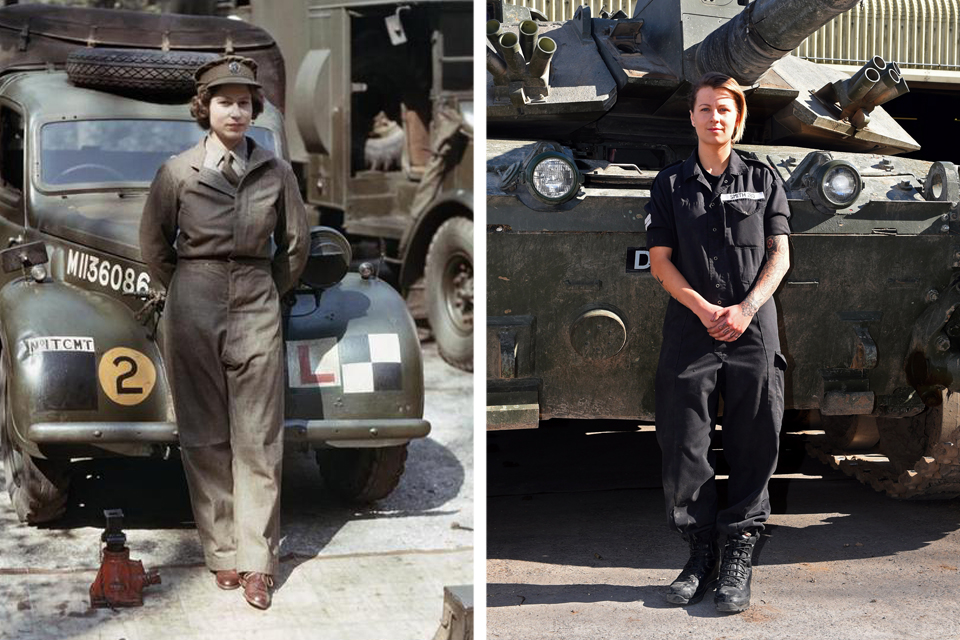 My job involves diagnosing and fixing electrical problems with the Challenger 2 main battle tank. It’s a dirty job and your hands are permanently black but someone has to do it — and I wouldn’t do anything else.

I think it’s admirable that during the war Princess Elizabeth joined the ATS. She was 18 and by the end of the war she reached the rank of Junior Commander and passed out as a fully qualified driver.

It’s important that on her 90th birthday our nation pays tribute to what she did during that time. It’s good to know that our Queen mucked in for the country.

For me, it’s nice to know that we did a similar job all those years apart, and that we share the same birthday is a nice connection. This job isn’t one that many people would want to do — it’s dirty, and there’s a lot of time spent on exercise living in a field. So the fact The Queen did it in the military is extraordinary.

It’s an interesting side to her character. She could have got a job anywhere, doing something far more comfortable but she chose the life of overalls and elbow grease — and I don’t blame her.

What does The Queen have in common with this Army tank technician?

I love my job. I got here after a lot of training, having joined the Army because I wanted a career where I can do different things every day. I always knew I wanted to join the Armed Forces, it was just a matter of when. I was going to join the Royal Air Force but I met a guy called Sergeant Matt Telford, who said I should look at joining the Army.

He told me that I shouldn’t join until I was ready and 100 per cent committed to it. Until that moment there was no point, he said, because you should be ready to commit yourself.

While serving in Afghanistan in 2009, Matt was shot and killed. I was in the Middle East at the time, teaching at an international school in Qatar. When I heard the news, I came home and joined up straight away. I had been in my own world, doing my own thing, and it made me realise I needed to crack on with my life and get things done.

People who knew me back home knew a slightly different me and they said I couldn’t do it. They laughed at the idea of me doing as I was told and taking orders. But I knew it was what I wanted to do and I didn’t let anything get in the way.

It takes a lot to get this far, there are a lot of tests and training you have to go through before you qualify to do the job but it was worth the effort.

So when I celebrate turning 25 this year, I’ll be remembering my special connection to The Queen, wishing her a happy birthday and a job well done.

Corporal Rebecca Smith joined the British Army in 2011 and has undergone years of training to become a qualified electronics technician for the Challenger 2 main battle tank. She plays basketball for the Army and in addition to deploying on numerous military exercises, helped provide security at the 2014 Commonwealth Games in Glasgow.

C
I want to join the navy but im an army applicant!