Ten years ago, senior nurse Chris Carter took a risk which would prove to be life changing. Leaving a job that he loved in the NHS for a leap in the dark – a career with the British Army. It was a choice that not only changed his life, but arguably it also changed the lives of many Zambians critically in need of nursing care.

Because his decision not only led to a new job, it also indirectly opened the door to a new and unexpected adventure when, rich in operational experience, he later answered a call for volunteers to go to Zambia to teach critical care.

A rewarding experience in the making. But he wasn’t expecting to end up heading a team which would be collaborating internationally and leading a program which would have a national impact on the future health care set up in a sub Saharan Commonwealth country. 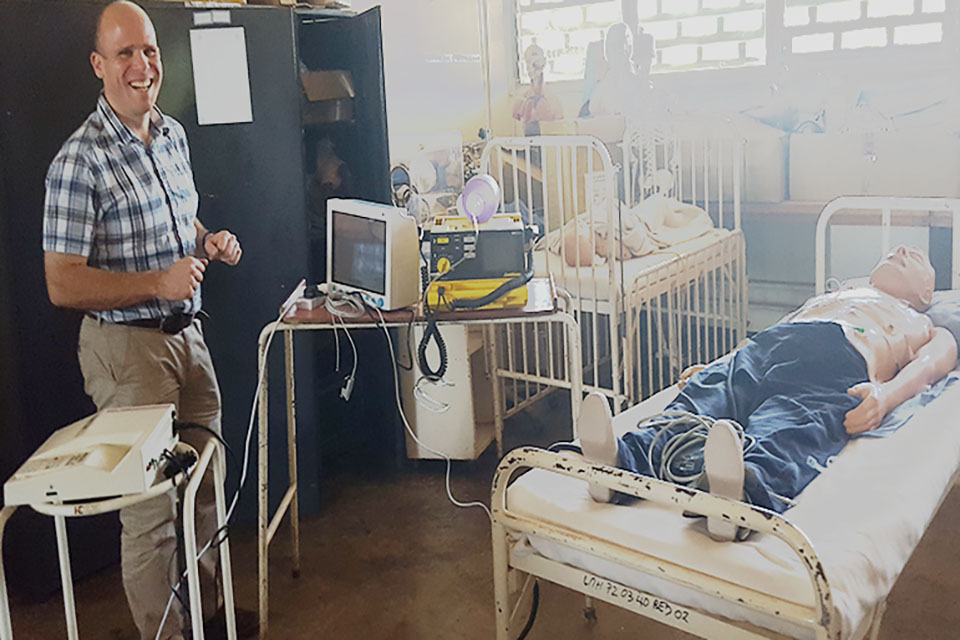 
It all started with that choice he made at the crossroads of his caring career. He said :


At the time it was at the height of the Afghanistan and Iraq campaigns, and I was looking for a new opportunity,

I’d always wanted to work internationally, and I’d always had the aspiration to work in a combat zone. Another aspiration was to test myself in a developing country and I knew the Army could offer me all that. I felt, if I don’t do this now, I never will.
​
A decade after taking that decision, Chris, 39, is now a Major in the Queen Alexandra Royal Army Nursing Corps, and all of those aspirations have been answered, and more.

Today he is a critical care nurse and a nurse lecturer working in the Defence School of health-care education, a military unit embedded in Birmingham City University. There he heads up a team responsible for training the Armed Forces future student nurses. He has a tour of duty of Afghanistan tucked under his Sam Browne belt, as well as other deployments to the Middle East.

For many that would be more than enough to keep them occupied. But the urge to serve is strong in Major Chris Carter. Which is why in 2015 he answered an ad in a medical journal for volunteers to set up a critical nursing care program in sub Saharan Africa. And so, his intense relationship with the Commonwealth country of Zambia began.

Looking at the list of skills and life experience that the job called for, it was clear that Chris had just what the doctor ordered. And as far as he is concerned it’s his career in the Army that he has to thank for that. He said:


In the Army, it’s not that they give you opportunities as such, they are available, and if you seek them out, and work hard for them, then you can get there.
​
Nursing in Zambia


Zambia is a stable land locked, low income country with 60 per cent of the population living in rural communities. Yet whilst it is poor, Zambia is training its doctors and anaesthetists, helped by international investment in terms of money and resources.

But it soon became clear that more was needed. Hence the advert. Major Carter said :


The Drs there realised that their project to develop health care was not going to reach its full potential unless investment was also being made in nursing staff,

The doctors were being trained in current practice, applied in the context of a developing country, dealing with diseases totally different to what we see in the UK, but which are common there. But without the nurses who do the majority of the care, the project wouldn’t work.
​
Initially the task facing Chris was to visit Zambia’s main hospital and help them to identify what they needed and to develop their framework for developing their nursing staff.

No funding? No project? No problem!


But before he could do that, another little problem lay before him. He said:


What transpired was that, despite what the advert said, in fact there was no project, no funding – nothing.
​
Undeterred, Chris and a small core of volunteers from the UK kept calm and carried on. He said:


Given my background, my contacts and my operational experience linked with my role in nursing education I convinced The Tropical Health and Education trust, a UK NGO, to fund me for a two week needs assessment.
​
Since then Chris has been to Zambia seven times, staying for periods of two to four weeks. He said:


In 2016 we worked with the Zambian Ministry of Health. We went to 16 public hospitals which meant a round trip of 4,980 kms in a Land Cruiser. There isn’t a bit of the country, off road or on tarmac that I haven’t seen.
​
On this epic trip he asked at each hospital, ‘What critical care can you realistically provide in your hospital? What are the challenges you face, and how are your nurses being employed? And that was the first time that they had had that snapshot of what was going on.

Gathering all that information, Chris and the team then wrote a report for the Ministry of Health. In it they recommended what they could do as a project team to help build the country’s capacity in nursing capability.

From this, what the Zambians identified as essential was a graduate nursing programme. 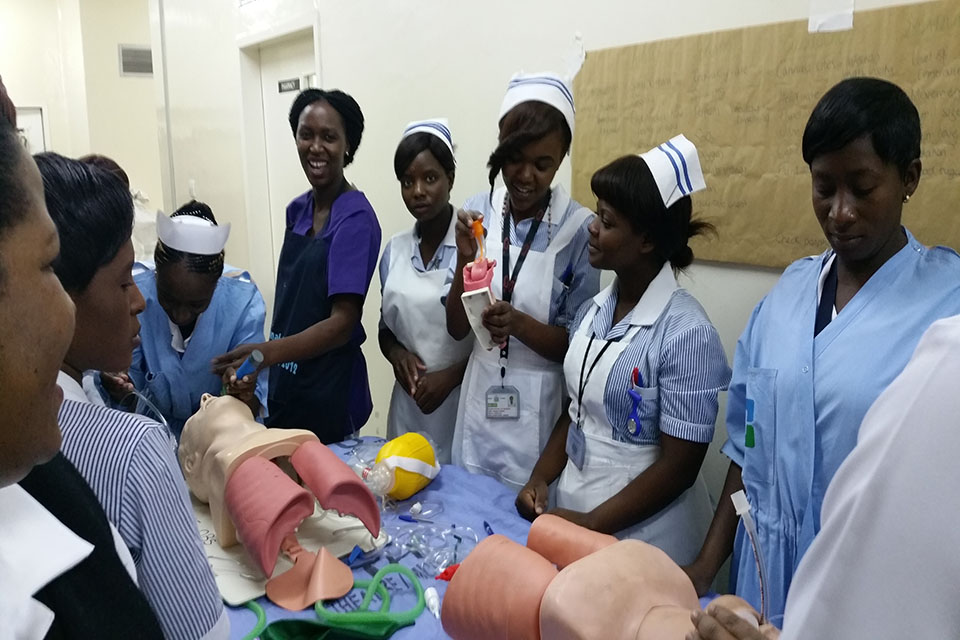 
What tends to happen is that a lot of money is spent on educating Drs, and while nurses might get the odd short course, which is valuable, what is needed is a structured framework which can contribute to the long-term career development of an individual.

Get that right and it means you have a reliable capability, you prevent people from getting demotivated because they don’t feel valued, and for places like Zambia, it stops the haemorrhaging of talented nurses who go to work in neighbouring countries who can pay more.
​
Armed with this information Chris went into battle attracting funding from DFID, the EU and from Birmingham university, who also provide him with all the professional back office functions and governance needed to keep such a project running.


From nothing, Chris has built up the team which has grown from just four enthusiasts into a truly international collaboration. Working closely with the Lusaka College of Nursing, the Zambian union of nursing organisations, the Ministry of Health and the General nursing council, Chris makes sure that whatever his team delivers, it is in accordance with the Zambian’s own priorities, but with his guidance, in the context of the UN’s sustainable development goals such as providing universal access to health care and building a framework for quality, lifelong learning. He said:


We are helping them to build up a critical mass of trained nurses, helping to develop a graduate cadre and in turn future leaders, future researchers, future educators. We’re building a framework for life.
​
And this must all be done in an atmosphere of cultural sensitivity, another skill which Chris picked up from his time in Afghanistan. He said:


We have to be aware that our way of doing something may not be the best way for them. It is all about helping them to find their own solutions.
​
Take the basic practicalities as an example of what he means by that. In a country which has 73 regional dialects, how are you going to provide a universal training package?

When the majority of the population live in remote villages, how would someone get health care if they had a ruptured appendix, or if they had broken their leg, or had an obstructed child birth, at night – how would you get them to a hospital which is two hours away, at night along a road which has no lighting.

It’s easy to see that sensible solutions to health care provision must be seen in this harsh context.

Such has been the success of the project, 900 health care workers have been trained since 2015, that the Army is keen to explore the benefits for the UK Armed Forces. Last year Chris took six students from the Defence School of Health, one from the navy, the rest Army, to Zambia as part of their training.


Not only do they get to see the treatment of diseases such as TB and malaria, which while rare in the UK, in their careers they will have to know about, but perhaps more importantly the pressures of practicing in a resource limited environment. Major Carter said:


We watched a Dr performing a procedure and I talk the students through it. I tell them to watch how he and the nurses were working – only opening equipment when they needed it, so they don’t waste anything – because it’s too precious.

I challenge them… imagine you are on board a ship, or in the field. You’re not going to have an infinite supply of gloves, oxygen, swabs… when you’ve got 10 patients on a ward, and there’s only three of you, there’s no agency you can call, no extra staff, it’s just you.
​
Thinking differently


Chris uses the experience to get the students thinking in a different way. A way which might just make a difference when on the battlefield. He said:


I get them to think about what they would do in that situation. Which is your sickest patient at the moment? Why do you think that?

I get them to think through some of the clinical decisions they would never face in the NHS. ‘You’ve only got 10 ventilators, but you’ve got 11 patients who need it – what are you going to do?’
​
Keeping calm and carrying on


It’s hard to imagine how someone as busy as Chris has managed to cope with it all. He says that lots of coffee helps, and he also points out the importance of protecting whatever little spare time you have, and using it wisely. He said:


I’m a swimmer, I like to get in the pool and just go up and down and get things into perspective.

It’s important to look at your successes. I’ve said this to people in Zambia when they get dispirited, and say ‘It never changes here’ I say, ‘look how far you’ve come in such a short time.’
​
This is another strength that he attributes to his time in the Army. He said:


What the Army gives you is the ability to be realistic in what you can do. Focus on the basics and do them well. That gives you a reality check. In our project it’s been about knowing what the Zambians want, how they want it delivered and on their timescales. My Army career has given me that grounding.
​
So, the decision he took a decade ago, to change the nature of his uniform from scrubs to camouflage pattern turned out to be the right one. Not just for Major Chris Carter, but for the people of Zambia too.

Speech: My mission to make sure NHS staff feel safe and secure at work